Getty Medical teams in Barcelona attend to the wounded on August 17.

The horrific car-ramming attack in Barcelona, Spain took the lives of at least 13 people and injured 100, including young parents, a grandfather, people just strolling with their families, and others.

There are also people who are still in critical condition or who are reported as missing. Julian Cadman, a 7-year-old British-born boy from Australia, was missing after becoming separated from his mother during the Barcelona attack. His mother is in the hospital in serious condition, reports UK Telegraph.

American Jared Tucker, 42, a pool company owner from California, is also among the dead.

The last photo of missing Aussie Julian Cadman before Barcelona attack, including the clothes he was wearing > MORE: https://t.co/Uk3O9oPFua pic.twitter.com/g1EYlTkokm

Here’s a full list of bios and names of the Barcelona victims who died as their names are released.

Jared Tucker, who owned a pool company in Lafayette, California, was in Barcelona on a two-week first wedding anniversary with his wife, Heidi, when the terrorists struck. Jared and his wife had paused to look for trinkets, he said he had to go to the restroom, and she never saw him alive again. You can read more about Jared Tucker, the lone American killed in the attack, here: 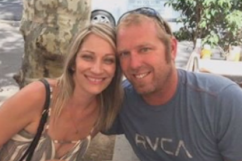 Gulotta was identified as a father of two from Italy. According to Yahoo, “He was on holiday with his partner and two children, one of whom is only seven months old, the other five.”

Horrifically, reported Yahoo, citing Italian media, “The Italian man was walking hand in hand with his five-year-old son, and his wife Martina was following with their seven-month-old baby in her arms.”

The other members of his family were not injured.

Vanbockrijck was from Brussels, Belgium. According to UK Telegraph, she was a mother of two who was on vacation in Spain with her husband and children when she was killed in the attack.

She worked in a bank in the town of Tongeren, which has created a memorial book for her, Telegraph reports.

Russo was also from Italy. He was a 25-year-old engineer. “Everyone describes him as an exceptional lad who had real desire to get things done and to do good,” said the town mayor, Riccardo Poletto to UK Telegraph. “Everybody here is lost for words at the news.”

Rodriguez was from Spain. Telegraph reports that he was a 60-year-old grandfather. His niece wrote on Twitter that he died “on the spot” and was walking with four other family members at the time that he was killed. She called it “desperate agony” as the family searched for news of Rodriguez.