After taking a firestorm of criticism on the internet, preacher Joel Osteen says that his megachurch in Houston has “never” closed its doors to those trying to escape the catastrophic flooding from Hurricane Harvey.

Osteen had been harshly criticized for saying Lakewood Church would be closed due to it being inaccessible. However, social media sleuths went to the church and discovered it wasn’t completely flooded as had been mentioned. Since the negative opinions, though, Osteen and Lakewood have tried to make amends and assist those in need. He announced the church would be opening as a shelter once others become full.

“We have never closed our doors,” Osteen’s statement said. “We will continue to be a distribution center for those in need. We are prepared to house people once shelters reach capacity. Lakewood will be a value to the community in the aftermath of this storm in helping our fellow citizens rebuild their lives.”

The official announcement that it’s open to people who need shelter was made August 29 via Twitter.

Lakewood is receiving people who need shelter. We are also coordinating with the city as a collection site for distribution.

The church seats 16,000 people and once served as the home arena for the Houston Rockets from 1975 to 2003. The church purchased the building, the Compaq Arena, for $7.5 million in 2003. It underwent extensive renovations that cost over $100 million to get the building where it is today.

Osteen appeared on CNN on Wednesday to explain his reasoning for the backlash. He said he wasn’t entirely sure “how this notion got started that we’re not a shelter and we’re not taking people.”

“There was a time, (CNN host) Chris (Cuomo), that the place was flooded,” Osteen said during the interview. “There was a safety issue the first day or two. … We would never put people in here until we know that it’s safe, and it was not safe those days, let me tell you.”

Osteen’s net worth is around $40 million, and his wife of 30 years, Victoria, is a co-preacher at Lakewood. The couple have two grown children who are known to perform actively in services at the church.

In 2010, the Osteen family moved from their home in Tanglewood, which was valued at $2.9 million, to a $10.5 million mansion in River Oaks, Culture Map reported.

The River Oaks home is a 17,000-square-foot stone mansion in the Tall Timbers subdivision. It’s located on 1.86 acres of land and reportedly had six bedrooms, six bathrooms, three elevators and five fireplaces when it was purchased. It also had a one-bedroom guest house along with a pool house. When the couple purchased the home, they had to pay $260,000 in property taxes for the year.

Here is a Google Maps view of the view outside of the River Oaks home:

The outside view of Joel Osteen’s $10.5 million home.

You can see other photos of the home here.

Harvey was a Category 4 hurricane that ravaged the Houston area when it made landfall August 25. It caused massive chaos in the city and dumped well over 50 inches of rainfall, a United States record. At least 38 people have died as a direct result of the massive storm thus far, and hundreds of thousands more have been displaced from their homes and forced to temporary shelters.

As of August 31, the U.S. Coast Guard said it’s rescued over 6,000 people and over 1,000 pets from the catastrophic floodwaters and brought them to safety. 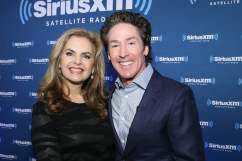 Loading more stories
wpDiscuz
58
0
Would love your thoughts, please comment.x
()
x
| Reply
Joel Osteen and his family moved into a $10.5 million in River Oaks in 2010. See a photo and get details about the home here.