Donald Trump has spoken in glowing terms about Professor Trump, who was his father Fred’s younger brother. Although he’s not as well known as other members of the Trump family, he’s one of the most distinguished and accomplished.

John George Trump, who died in 1985 at age 78, has become the subject of bizarre time travel conspiracy theories on the Internet that stem from his real-life connection to engineer and inventor Nikola Tesla.

1. John Trump Was a Professor at MIT in Electrical Engineering

According to a lengthy profile of John Trump in Physics Today, John George Trump “was born in 1907 and received a bachelor’s degree in electrical engineering from the Polytechnic Institute of Brooklyn in 1929.”

He was a highly educated man. “In 1931 he received a master’s degree in physics from Columbia University and in 1933 a doctorate in electrical engineering from MIT, where he worked under physicist Robert J. Van de Graaff… Trump then worked as a research associate at MIT before receiving an appointment there as an assistant professor of electrical engineering in 1936,” the profile reads.

“Working with Prof. Robert J. Van de Graaff, he designed one of the first million-volt X-ray generators. Used initially for clinical purposes at the Collis P. Huntington Memorial Hospital in Boston in 1937, it was a development that provided additional years of life to cancer patients throughout the world,” it reads.

The MIT biography continues, “After the war he co-founded, with Robert Van de Graaff and Denis Robinson, the High Voltage Engineering Corporation to manufacture generators for use in nuclear research, industrial processing, radiography, and medicine. Trump directed the High Voltage Research Laboratory on the MIT campus from 1946 to 1980. The focus of his research was high voltage phenomena, the acceleration of electrons to high energies, and the interaction of radiation with living and non-living matter.”

3. John Trump Was Asked to Inspect Nikola Tesla’s Papers After the Inventor’s Death

The New Yorker describes John Trump as a “brilliant scientist” who “was at M.I.T. for decades” and who helped develop X-ray machines that helped extend the lives of cancer patients. “Trump was involved in radar research for the Allies in the Second World War, and in 1943 the F.B.I. had enough faith in his technical ability and his discretion to call him in when Nikola Tesla died in his room at the New Yorker Hotel, in Manhattan, raising the question of whether enemy agents might have had a chance to learn some of his secrets before the body was found,” wrote the New Yorker, in a passage driving a lot of the conspiracy theories.

There was fear, the New Yorker reports, that Tesla was developing a “death ray.” In a report, the magazine notes, Professor Trump doused speculation that Tesla was working on something big. Tesla is well-known for his interests in time travel, and therein, a conspiracy theory was born. According to Biography.com, Tesla was an engineer and inventor who invented a coil still used in modern radio technology and briefly worked with Thomas Edison.

4. Donald Trump Has Spoken Highly of His Uncle, Who Developed Radar Equipment During WWII

Donald Trump with his father, Fred.

John Trump was a professor and the younger brother of Trump’s father, Fred, according to The New Yorker, which quotes Donald Trump as saying of his uncle, “My uncle used to tell me about nuclear before nuclear was nuclear,” referring, the magazine theorizes, to the hydrogen bomb. The Boston Globe notes that Donald Trump “was born one year after the first nuclear bomb was dropped on Hiroshima in 1945.”

Trump praised his uncle on the campaign trail but also used his intelligence as proof of his own intellect. “I had an uncle went to MIT who is a top professor. Dr. John Trump. A genius,” Trump told CNN. “It’s in my blood. I’m smart. Great marks. Like really smart.”

“In World War II Dr. Trump was influential in the development of radar and short-wave radar equipment. He was appointed director of the British branch of the M.I.T. Radiation Lab in 1944,” the Times reported. After the war, “Dr. Trump, while still on the faculty at M.I.T., became associated with the Department of Radiology at the Lahey Clinic in Boston and later became chairman of its board. Under his direction rotational radiation therapy was developed.”

Trump was the author of 80 scientific publications, according to the Times, and received many prominent awards during his lifetime. He was survived by three children.

The theories derive from John Trump’s review of the Tesla documents but also because of three strangely prescient books written by an 1800s era author named Ingersoll Lockwood. Some feel the books foretold the rise of President Trump and argue online that Lockwood received a visit from a time traveling Barron Trump – yes, they really argue that. The books do have eerie coincidences to modern times; Lockwood wrote three books before 1900 and two feature a protagonist named Baron Trump (who visits Russia and receives tutelage from a powerful man named Don) and the third is titled “The Last President.”

Snopes picks apart the conspiracy theories, noting, “Although these books contain some seemingly bizarre coincidences, they are not evidence that Donald Trump has access to a time machine. Time travel conspiracy theories such as this one pick and choose material that supports their conclusions while ignoring everything else. For instance, these books also contain giant turtles, alternate dimensions, a battle with a big white crane, a dog named Bulgar, and a little smiling man frozen in time.”

You can read more about the books here: 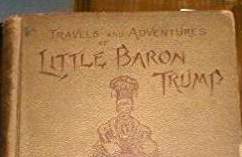 Loading more stories
wpDiscuz
0
0
Would love your thoughts, please comment.x
()
x
| Reply
John Trump, Donald Trump's uncle, was a brilliant MIT physicist and professor. He is the subject of bizarre conspiracy theories because of his link to Nikola Tesla.