A repo tow truck driver repossessing a car in Compton, California was chased and boarded by the defaulter, who attacked him a crowbar while he drove. Brittany McDonald and James Harris, who happened to be driving nearby, caught the entire scene on camera until police arrived.

According to the Los Angeles County Sheriff’s Department, the driver of the repo truck was attempting to repossess a vehicle that the owner had defaulted on. The car had been parked on the street when he came upon it.

As the repossessor was trying to get the car hooked up to his tow truck, the registered owner came after him. The repo man then began to drive away with the car not properly secured. In the video, sparks fly from the car as its front end drags on the street.

The registered owner somehow gets on the tow truck and begins to smash the truck with a crowbar.

According to NBC Los Angeles, “Both men were released after being questioned, but authorities are considering vandalism and other charges against the owner of the car.” 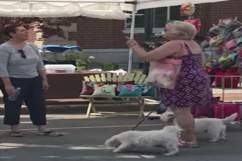 WATCH: Shopkeeper Gets Harassed by ‘Disabled Vet’ Who Let Dogs Pee on Her Products

Read More
California, Los Angeles, Repo Men, Youtube
wpDiscuz
3
0
Would love your thoughts, please comment.x
()
x
| Reply
A repo tow truck driver repossessing a car in Compton, California was chased and boarded by the defaulter, who attacked him a crowbar while he drove.