Hurricane Harvey has been downgraded to a tropical storm, but it has stalled over southeast Texas and is continuing to dump rain on the area. According to the National Hurricane Center, Harvey has parked itself on the coast of Texas and will likely be stalled there for a few days.

The map below was uploaded by the National Hurricane Center and shows where Harvey is today. It also shows the projected path of the storm, which will start moving northeast by the middle of the week. The storm will stay over southeast Texas, moving back into the Gulf of Mexico before it starts moving into Louisiana sometime on Wednesday. The current storm speed is 3 mph. From there, it is expected to travel into Arkansas, Missouri, Tennessee, and Kentucky. It’s unclear how strong it will be at that point, as it could weaken before heading out of Texas.

For the time being, Harvey is continuing to bring heavy rain to southeast Texas. The photo below shows the rain totals so far. Areas in Houston are topping 20 inches, with several more in the forecast over the next few days. There are some areas in Houston that will see rain totals of over 50 inches by the time this storm is completely over.

“As it spins offshore, the storm is expected to dump an additional 15 to 25 inches of rain through Friday over the upper Texas coast and into southwestern Louisiana, exacerbating the life-threatening, catastrophic flooding in the Houston area, the hurricane center said. Isolated storm totals may reach 50 inches over the upper Texas coast, including the Houston/Galveston metropolitan area,” reports USA Today.

The winds are still a factor, though they aren’t packing as much of a punch. The maximum sustained wind speed was 40 mph as of 4:00 a.m. Central time. 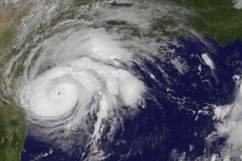 Loading more stories
wpDiscuz
0
0
Would love your thoughts, please comment.x
()
x
| Reply
Hurricane Harvey has been downgraded to a tropical storm. It has stalled over southeast Texas.