Almost two decades after it took off from Earth, NASA scientists watched as one of the most successful spacecraft used in a planetary mission plummeted to its demise.

Cassini was able to capture final pieces of data from Saturn and relay them back to Earth just as it lost all connections during its “Grand Finale.”

The final stage of the planetary mission marks the end to one of the most successful planetary space missions in history.

“This is the final chapter of an amazing mission, but it’s also a new beginning,” said Thomas Zurbuchen, associate administrator for NASA’s Science Mission Directorate at NASA Headquarters in Washington. “Cassini’s discovery of ocean worlds at Titan and Enceladus changed everything, shaking our views to the core about surprising places to search for potential life beyond Earth.”

According to NASA, one of the final pieces of data captured by the spacecraft was an infrared photo it took while plummeting to the planet. It shows a spot on Saturn’s dark side where it disintegrated after communications were severed.

Where did @CassiniSaturn make its final plunge? This infrared view shows the spot in the atmosphere of the planet: https://t.co/KPNcuubRbO pic.twitter.com/2m5ZfiXKG6

“One of the most beautiful planets we can imagine,” Zurbuchen said of Saturn.

“There it is, one of the most beautiful planets we can imagine…some of the science borders on Sci-Fi” – @Dr_ThomasZ https://t.co/mzKW5uDsTi pic.twitter.com/L1z3TMeY5C

Cassini was launched on October 15, 1997 from Cape Canaveral Air Force Station’s Space Launch Complex 40. It was the first probe ever to orbit Saturn and finally arrived at the planet in 2004.

During those almost 20 years, Cassini flew through space and nearby Saturn to gather groundbreaking information on the makeup and structure of Saturn’s rings.

It also delivered the Huygens probe to Titan, becoming the first spacecraft to land in the outer solar system.

“Most of what we have in science textbooks about Saturn comes from Cassini,” JPL Director Mike Watkins said to the Washington Post. “The discoveries are so compelling, we have to go back.”

The total cost of the planetary exploration mission was $3.26 billion.

Friday’s “Grand Finale” was mapped out well in advance by NASA. Back in April, the spacecraft started a series of orbits that had the goal of looking in between and behind Saturn’s rings.

Just days before it was set to crash into Saturn, NASA decided to fly Cassini past Titan one final time. In doing so, the gravitational pull from the moon acted as a slingshot as it pushed Cassini toward Saturn on its last-ever ride.

Earl Maize thanks his incredible team. Almost everything we know about Saturn comes from Cassini, comes from this team. #NASASocial pic.twitter.com/K2rTI1TuMZ

Here are some of the final images captured by Cassini before it headed toward Saturn:

NASAAs it glanced around the Saturn system one final time, NASA’s Cassini spacecraft captured this view of the planet’s giant moon Titan.​ These views were obtained by Cassini’s narrow-angle camera on Sept. 13, 2017. They are among the last images Cassini sent back to Earth.

This image of Saturn’s rings was taken by NASA’s Cassini spacecraft on Sept. 13, 2017. It is among the last images Cassini sent back to Earth.

This image of Saturn’s northern hemisphere was taken by NASA’s Cassini spacecraft on Sept. 13, 2017. It is among the last images Cassini sent back to Earth.

This image of Saturn’s outer A ring features the small moon Daphnis and the waves it raises in the edges of the Keeler Gap. The image was taken by NASA’s Cassini spacecraft on Sept. 13, 2017. It is among the last images Cassini sent back to Earth.

Here are some of the incredible images and videos taken by Cassini during its 13 years of orbit:

#Cassini status: Mission Accomplished. Its discoveries have changed our view of Saturn and our solar system pic.twitter.com/4x4cpSLs4p

"You taught me the courage of the stars before you left, how light carries on endlessly even after death" Farewell #Cassini @sleepingatlast pic.twitter.com/b1DAnz63Wj

“Do not go gentle into that good night,..
Rage, rage against the dying of the light.”#Cassini: 1997- infinity
Bravopic.twitter.com/sKVbnAbDgI 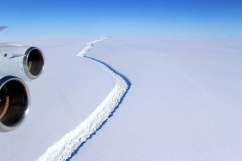