The two-island country of Antigua and Barbuda was devastated by Hurricane Irma. Unfortunately, the two islands are in the path of another storm, Hurricane Maria. The latest forecast for Maria and when it could reach Antigua and Barbuda and the other Leeward Islands by Monday night. At 5 p.m. Monday, the U.S. National Hurricane Center confirmed that it is now a Category 4 hurricane.

Maria will be an issue for Caribbean Islands as a strengthening hurricane. East coast will have to watch future track. pic.twitter.com/1jhXxZJSuO

The NHC reports that both islands are now under a Tropical Storm Warning. This “means that tropical storm conditions are expected somewhere within the warning area within 36 hours.”

The Antigua & Barbuda government also issued a statement through the Daily Observer that the country is now under a hurricane watch. “Residents of Antigua and Barbuda are advised to put hurricane preparations in place ahead of the weather system and stay tuned to the media for further updates,” the government warns.

Barbuda was totally devastated by Hurricane Irma. The island was completely evacuated, meaning that for the first time in 300 years, no one is living there. “The damage is complete,” Ronald Sanders, the Antigua and Barbuda ambassador to the United States, told Public Radio International, reports CNN. “It’s a humanitarian disaster.”

Sanders added, “For the first time in 300 years, there’s not a single living person on the island of Barbuda — a civilization that has existed in that island for close to, over 300 years has now been extinguished.”

Antigua and Barbuda were part of the U.K. until 1981, when it became a sovereign state within the British Commonwealth. The CIA World Factbook estimates that the country has a population of 94,731, with 97 percent of its residents living on Antigua. Almost 60 percent of its annual $1 billion GDP comes from tourism.

“We’ve had most of the people we’ve brought over to Antigua in shelters,” Sanders told PRI after Irma hit. “We’ve tried to make living accommodations as good as humanly possible in these circumstances. Fortunately, we had planned ahead for this hurricane, and we had ordered supplies in from Miami and the United States before the hurricane hit.” 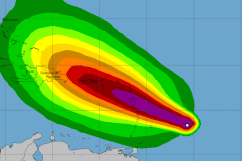 Loading more stories
wpDiscuz
1
0
Would love your thoughts, please comment.x
()
x
| Reply
Antigua and Barbuda, which were devastated by Hurricane Irma, could see another storm, Hurricane Maria, as soon as tomorrow. Here's the latest forecast.