Kate Middleton is pregnant with her third child, officials at Kensington Palace announced on Monday.

“Their Royal Highnesses, The Duke and Duchess of Cambridge, are very pleased to announce that The Duchess of Cambridge is expecting their third child,” officials said in a press release. “The Queen and members of both families are delighted with the news.”

1. This Is the Duke and Duchess of Cambridge’s Third Child

The Duke and Duchess, along with Prince George and Princess Charlotte, today arrived in Poland for the start of #RoyalTourPoland

On Sept. 8, 2014, it was announced that Middleton was pregnant with her second child. On May 2, 2015, she gave birth to a baby girl, weighing 8 pounds, 3 ounces, according to the BBC. Two days later, her name was officially released: Charlotte Elizabeth Diana.

The new @heads_together film captures a conversation between Their Royal Highnesses that occurred at Kensington Palace as they looked ahead to this weekend's London Marathon and reflected on the growth of the campaign over the last year. The conversation covers a range of topics including the emotional changes new parents go through, bereavement, the stresses of modern childhood, and dealing with trauma in the workplace. Watch the full film via the link in our bio.

Royals officials said Middleton, 35, is suffering from hyperemesis gravidarum, which causes weight extreme weight loss due to vomiting and nausea.

Dr. Jennifer Ashton, a practicing OB/GYN, told ABC News in 2014 when Middleton was pregnant with her second child, Charlotte, that the condition can be quite severe.

Ashton said comparing it to morning sickness is like saying “a hurricane is a little bit of rain.” 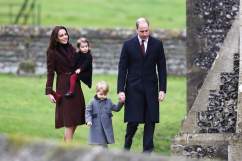 3. The New Baby Will Be the Fifth in Line To the Throne

GettyPrince Charles is at the top of the line of succession, followed by his son Prince William. Harry is now sixth in the line.

Prince Harry was fifth in the line to the throne, after his father Prince Charles, his brother Prince William and his two children, George and Charlotte.

This new child will now be fifth in the line of succession. 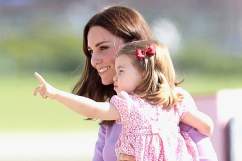 But that just might be OK with Prince Harry, who in a recent interview said: “Is there any one of the Royal Family who wants to be king or queen? I don’t think so, but we will carry out our duties at the right time.”

4. The Duke and Duchess of Cambridge Have Been Married for Six Years

The ceremony was attended by 2,000 friends, family and dignitaries, according to BBC, and watched an estimated 2 billion people.

5. Messages of Congratulations Have Been Pouring In for the Royal Couple

Media outlets across the world are reporting the news of the new royal baby and many people have taken to social media to offer messages of congratulations.

Prince Harry said on Monday that he was “very, very happy” for his brother and sister-in-law.

Prince Harry on the prospect of becoming an uncle again. pic.twitter.com/A4YOY8jYRl

And of course, fashion magazines have congratulated Kate Middleton, one of the world’s most photographed women, on her pregnancy.

Congratulations are in order for Kate Middleton and Prince William! https://t.co/osH5zIWgUl

Congratulations are in order for Kate Middleton (though TBH, we saw this coming…) https://t.co/KtdxSAujxt pic.twitter.com/pkgfaDvJU4