Getty Rescuers, firefighters, policemen, soldiers and volunteers remove rubble and debris from a flattened building in search of survivors after a powerful quake in Mexico City on September 19, 2017.

A magnitude 7.1. earthquake shook the central part of Mexico, near Mexico City on Tuesday, leaving thousands desperately fleeing the streets in a panic. At least 230 people were dead at the time of publishing Wednesday morning, with the fear of many more to come.

“Dozens of buildings tumbled into mounds of rubble or were severely damaged in densely populated parts of Mexico City and nearby states,” The Boston Globe reported. “Mayor Miguel Angel Mancera said buildings fell at 44 places in the capital alone.”

The last time that an earthquake of that magnitude hit the area was in 1985, killing thousands. In an eerie twist,that earthquake happened on the same date of September 19 of that year:

A major earthquake strikes Mexico City on the anniversary of the infamous 1985 earthquake. https://t.co/02JhE0lyuY 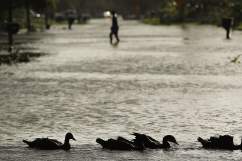 ABC posted drone footage from the scene earlier in the day Tuesday. At that point, 42 had been confirmed dead:

“God bless the people of Mexico City,” President Trump tweeted. “We are with you and will be there for you.”

God bless the people of Mexico City. We are with you and will be there for you.

Mexico City’s “airport descended into chaos as the ground rippled and chunks of plaster fell from the walls, ABC reported. “‘I felt the ground shaking, and I heard everyone screaming and starting to run,'” resident George Smallwood told the news station, “adding that at first, he thought he was in the middle of a terror attack.” 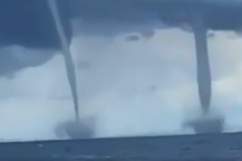 This article will be updated as information on the death toll becomes available.

Click below to see photos and videos of the chaos and damages brought on by the massive earthquake: 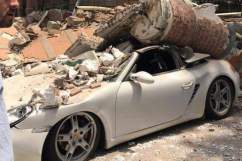