Shocking video captured by a social media user shows a building crumbling as people scramble to safety during a 7.1 magnitude earthquake.

A massive 7.1 magnitude earthquake has struck and leveled many parts of central Mexico.

Despite the distance, many in Mexico City reported being able to feel the shaking caused by the earthquake. Check below to see the shake map, according to the U.S. Geological Survey.

A shake map showing the intensity of the earthquake.

The area has been advised to be prepared for aftershocks and tremors.

Shocking videos and photos were posted to social media and show the tragic devastation the quake caused. In one video, the Servicio Nacional de Empleo building, a tall structure draped in a Mexican flag banner, is seen crumbling as dozens of people run in search of safety as dust billows toward the sky.

Other videos and photos show incredible amounts of destruction left in the nation’s capital city following the earthquake.

Mexico City after the earthquake. pic.twitter.com/5gWZz8k82p

USA Today reported that thousands of people were seen running out of buildings in a panic on some of Mexico City’s busiest streets.

Traffic across the city has come to a halt and many flights on the way to the airport have now been diverted as the airport reportedly suffered extensive damage.

According to The Los Angeles Times, residents in Mexico City held preparation drills on the anniversary of a historic 1985 earthquake. That earthquake was an 8.0 magnitude and it caused extreme damage to Mexico City. The death toll has been disputed, but about 5,000 bodies were recovered from debris and represent those legally certified as dead. However, that doesn’t include the amount of missing people who were never recovered. The National Seismological Service said in a report that 45,000 people died from the quake and 30,000 were injured.

Tuesday’s earthquake in Mexico comes just under two weeks after an 8.2 magnitude earthquake leveled thousands of homes in the southern region of Mexico.

The earthquake was the strongest one to hit the country in a century and killed 61 people total, all residing in the southern part of the country. 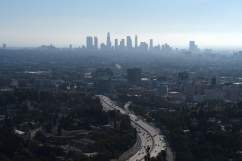