Hurricane Maria’s eye is approaching Turks and Caicos. Right now, Maria is approximately 55 miles north of Grand Turk island, a popular tourist destination, and she is moving northwest at about 8 mph. Although she has been downgraded to a Category 3 storm, Maria is still bringing winds of 125 mph (with higher gusts) to the islands in her path. Conditions in this area are expected to worsen today.

Maria is expected to clip the southern-most islands of the Bahamas before heading further north into the Atlantic Ocean. From there, her exact path is unknown.

“Maria is expected to slowly weaken over the next 48 hours and then will begin to weaken faster as it reaches colder waters, left behind by Jose. Water levels up to 9 to 12 feet above normal tide levels are expected in the hurricane warning area of the southeastern Bahamas and the Turks and Caicos Islands… The Turks and Caicos are forecast to pick up 8 to 16 inches of rain, with isolated 20-inch amounts. The southeastern Bahamas can expect 4 to 8 inches of rainfall through Saturday,” reports The Weather Channel.

Hurricane Maria caused major flooding in Puerto Rico and left the island completely without power. The destruction left in her wake has been called “catastrophic.”

After leaving Turks and Caicos, Maria is set to head into the Atlantic where she is expected to weaken even more because of the colder water temperatures. According to the latest projected path from the National Hurricane Center, it does appear as though Maria might interact with the East Coast of the United State by the middle of next week.

As you can see on the map below, Maria appears to jog a bit more to the east, bringing her closer to the coast as many would like to see. If she continues on a more northern path, she could make landfall somewhere in New Jersey. 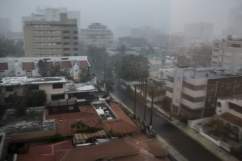 Read More
Hurricane, Hurricane Maria, Weather
Hurricane Maria's eye is approaching Turks and Caicos. She is expected to continue moving northwest over the next few days.