Hurricane Maria has been making her way across the Atlantic and seems to following a similar path to Hurricane Irma. On Monday evening, Maria strengthened to a Category 5 storm. She is approximately 15 miles east southeast of Dominica, moving west northwest at 9 mph. She is expected to make landfall in several Caribbean islands this week. She will make landfall in Puerto Rico on Wednesday.

The latest models from the National Hurricane Center show Maria heading over the Caribbean but she does not appear to be heading toward Florida. Below is a map that shows the latest projected path for Hurricane Maria. If the storm keeps moving in this direction, Florida will more than likely be spared of her wrath.

Many Florida residents are still dealing with the after effects or Irma, so this latest path update is very much a relief. At the same time, local weather personnel encourage people to keep themselves updated, just in case things change in the coming days.

“While we ‘never say never,’ it appears unlikely Maria will directly impact Florida. The GFS still shows possible impact in the Carolinas while the Euro brings it out to sea after brushing the Eastern Bahamas,” Tampa, Florida, meteorologist Denis Phillips wrote on his Facebook page on Monday evening. “We all know tracks can change. So, we can’t completely write this off, but after last week, I seriously doubt anyone would anyway. So, grab a few supplies that you could have used last week, or emptied out, and have them around, just in case. The hurricane season still has over 2 months to go,” he added.

Some of the new GFS models bring Maria closer to the Carolinas. The European model shows Maria heading out to sea, sparing much of the east coast of her wrath.

“Whether Maria will ever pose an East Coast threat will depend on steering currents in the upper atmosphere over the western Atlantic Ocean and the eastern United States that cannot be pinned down this far in advance,” reports The Weather Channel.

Below is a map showing the earliest arrival times of tropical storm force winds. Maria is moving fairly slow. Signs that she is coming toward the Bahamas wouldn’t be felt until Friday at the earliest.

More information about Hurricane Maria and her projected path will be available every few hours. 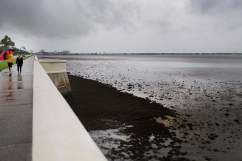 Loading more stories
wpDiscuz
1
0
Would love your thoughts, please comment.x
()
x
| Reply
Tropical Storm Maria is expected to become a hurricane as she heads for Puerto Rico. She could also bring nasty weather to Florida by the end of next weekend.