Getty Police in Las Vegas responding to the deadly mass shooting at a music festival.

The debate over gun control in the United States is at the forefront again after the mass shooting in Las Vegas that killed at least 50 people and wounded hundreds others.

President Donald Trump took to Twitter on Monday morning to send his condolences to the victims of the shooting, the deadliest in modern U.S. history.

Many other people used social media to make a plea for stronger gun control laws.

Here is a quick roundup of reaction to the Las Vegas shooting and the issue of gun control:

Everytown and @MomsDemand respond to shooting in Las Vegas that killed at least 50 people. https://t.co/Xc6CNqP0AW

Our grief isn't enough. We can and must put politics aside, stand up to the NRA, and work together to try to stop this from happening again.

As we grieve for the victims in Las Vegas, let's resolve to stop mass shootings in America – and back up our words with actions.

Actions speak louder than thoughts and prayers. We must end this toxic cycle of shock > condolences > inaction. #LasVegas #GunControl

Appalled by the senseless loss of life in Las Vegas. Jill and I hold all those affected and grieving in our hearts.

Dem senator: "I am furious" at Congress' inaction on gun control https://t.co/GM9M8AA8Sl pic.twitter.com/JczRirBWh4

We need to say #ENOUGH to gun violence. Join us in honoring the victims & survivors in Las Vegas by taking action! – https://t.co/ZTbkiA6k7C pic.twitter.com/YZYALrlOEd

We are saddened & sickened to wake up to news of a horrific mass shooting on the Las Vegas Strip. Enough is enough. https://t.co/VpopAZolTK 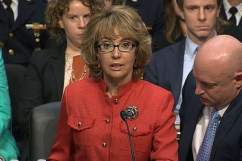 Read More
Gun Control, Las Vegas Concert Shooting
The debate over gun control in the United States is at the forefront again after the mass shooting in Las Vegas that killed at least 50 people and wounded hundreds others.