Former Arizona congresswoman Gabrielle Giffords tweeted on Monday morning that she was “heartbroken” by the mass shooting at a concert in Las Vegas that killed at least 50 people and wounded hundreds of others.

Heartbroken by the scene our nation is waking up to this morning. No person should endure the horror Las Vegas experienced last night.

In a just a matter of minutes, one man killed at least 50 people. Another 200 were injured. This is a grave tragedy for our nation.

My heart is with the victims, their families and friends, and the law enforcement officers who risked their lives to save others.

Giffords was shot in the head in 2011 during a public meeting with her constituents in Tuscon. Thirteen other people were injured in the shooting and six were killed, including the chief judge for the United States District Court for Arizona, John M. Roll, and 9-year-old Christina-Taylor Green. 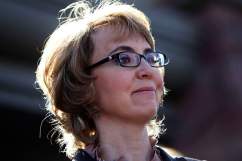 Police arrested Jared Lee Loughner following the shooting. He was diagnosed with paranoid schizophrenia and was initially ruled mentally incompetent to stand trial. In August 2012, he was ruled competent to stand trial, but before his trial began, he agreed to plead guilty. He received seven life sentences without parole, plus an additional 140 years in prison.

Giffords has since become an outspoken advocated of gun control. She and her husband astronaut Mark Kelly created a political action committee called Americans for Responsible Solutions.

“Gun violence is a full-blown national crisis—one that, on an average day, claims 91 American lives, including seven children and teens. Our gun murder rate is 25 times higher than other countries like ours. And women are 11 times more likely to be murdered with a gun here than in our peer countries,” she wrote in an op-ed in Vogue magazine in 2016.

“As a country, that is not how we want to stand out. One reason for this gun violence crisis? We have bad laws that make it too easy for dangerous people, including felons, domestic abusers, and stalkers, to get their hands on guns. In most states, a dangerous person like a vicious domestic abuser with a restraining order has the option of buying a gun without a background check. At every turn, the gun lobby and the politicians it backs have fought to protect these loopholes,” she wrote.

Giffords, 47, represented Arizona’s 8th District in the House of Representatives from 2007 to 2012.

Loading more stories
wpDiscuz
0
0
Would love your thoughts, please comment.x
()
x
| Reply
Former Arizona congresswoman Gabrielle Giffords tweeted on Monday morning that she was 'heartbroken' by the mass shooting at a concert in Las Vegas.