Getty Convicted Watergate conspirator E Howard Hunt on the witness stand for the first time. He directly involved White House Special Counsel Charles Colson in the burglary of a psychiatrist's office to gain damaging material against Daniel Ellsberg, saying he masterminded the plan.

E. Howard Hunt, already a controversial figure due to his involvement in Watergate, the CIA, and as a White House “plumber,” confessed to his son that he was involved in the assassination of President John F. Kennedy, which he said was called “the Big Event” by a group of CIA and other assassins gone rogue.

Hunt didn’t stop there, either. In the detailed confession, which he gave shortly before he died, Hunt named other names, putting the assassination at the feet of shadowy figures in the CIA, and claiming the trail led directly to the White House itself, debunking the government’s supposed lone gunman theory. Hunt’s confession is getting renewed attention now that President Donald Trump authorized the release of thousands of government documents associated with the assassination. Trump is still reviewing some documents at the request of spy agencies that want their release blocked.

What specifically did E. Howard Hunt say in his confession on the JFK assassination? Who did he name? Who, exactly, was Howard Hunt? A seminal article in Rolling Stone provided rich details on the confession, which has been well known among Kennedy assassination researchers for years, if not the general public. Hunt’s son, Saint John, has also appeared on radio programs and spoken repeatedly about what he says his father told him.

1. Hunt Told His Son That LBJ Was Ultimately Behind the Assassination of JFK

The Rolling Stone article is called The Last Confession of E. Howard Hunt. It chronicles the claims that Hunt made in great detail, virtually on his deathbed, to his son, Saint John. The article ran in April 2007 but it details conversations that Saint John said he had with his father in 2003. An infirm and soon-to-die Howard Hunt cleared his conscience, and he said Lyndon Johnson was ultimately responsible for the murder of President John F. Kennedy.

“…propped up in his sickbed, paper on his lap, pen in hand and son sitting next to him, he (Hunt) began to write down the names of men who had indeed participated in a plot to kill the president,” Rolling Stone reported, adding that Hunt’s son had come to suspect his father might have been one of the infamous “three tramps” present in Dallas that day. According to Saint John and Rolling Stone, Hunt said the assassination was a conspiracy that went all the way up to the vice president, Lyndon B. Johnson.

“E. Howard scribbled the initials ‘LBJ,’ standing for Kennedy’s ambitious vice president, Lyndon Johnson. Under ‘LBJ,’ connected by a line, he wrote the name Cord Meyer. Meyer was a CIA agent whose wife had an affair with JFK; later she was murdered, a case that’s never been solved,” reported Rolling Stone. “Next his father connected to Meyer’s name the name Bill Harvey, another CIA agent; also connected to Meyer’s name was the name David Morales, yet another CIA man and a well-known, particularly vicious black-op specialist. And then his father connected to Morales’ name, with a line, the framed words ‘French Gunman Grassy Knoll.'”

Saint John wrote on Twitter that his father’s diaries are among the documents dumped into the public domain by President Trump, who was complying with a Congressional-ordered date to release the remaining JFK documents, although he could have unilaterally stopped the release. However, Trump has delayed the release of some documents at the request of intelligence agencies. Saint John Hunt attends national assassination conferences and has authored negative books about the Bush family, including with Roger Stone, the controversial political operative who once worked for Trump. Saint John Hunt’s Twitter page calls him “Author @Bushcrimes musician, and the son of the legendary CIA covert operative, E. Howard Hunt.” Roger Stone authored a book claiming that LBJ killed Kennedy. 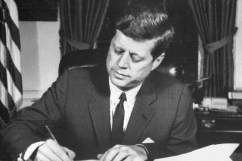 According to Rolling Stone, E. Howard Hunt then scribbled out a more detailed narrative of a government plot to take out a president. “E. Howard also gave Saint two sheets of paper that contained a fuller narrative. It starts out with LBJ again, connecting him to Cord Meyer, then goes on: ‘Cord Meyer discusses a plot with [David Atlee] Phillips who brings in Wm. Harvey and Antonio Veciana. He meets with Oswald in Mexico City…. Then Veciana meets w/ Frank Sturgis in Miami and enlists David Morales in anticipation of killing JFK there. But LBJ changes itinerary to Dallas, citing personal reasons,” the magazine reported.

According to The Baltimore Examiner, “Hunt and Sturgis were once suspects in the assassination, but ruled out by the Warren Commission. However, to this day some believe they were the two men on the Grassy Knoll.” Others don’t believe the confession, though, because of the shadowy nature of E. Howard Hunt’s character.

Saint John appeared on a radio program as well, and produced an audio tape of his father discussing the plot. You can listen to the audio here. He, again, lays the plot at the feet of LBJ. According to the Baltimore Post Examiner, with the exception of Rolling Stone, the media pretty much ignored the Hunt confession when his son originally revealed it: “The only major print media to cover the confession was Rolling Stone,” the site reports.

As to his own involvement, Hunt claimed he had advance knowledge of what would happen in Dallas. “In the next few paragraphs, E. Howard goes on to describe the extent of his own involvement. It revolves around a meeting he claims he attended, in 1963, with Morales and Sturgis. It takes place in a Miami hotel room…Morales leaves the room, at which point Sturgis makes reference to a ‘Big Event,'” reported Rolling Stone, adding that Hunt claimed he told the men they didn’t need him.

3. Howard Hunt Was a White House ‘Plumber’ Who Organized the Watergate Break-in

Howard Hunt’s name became a household word after Watergate. According to The Washington Post, Hunt was “a member of the White House ‘plumbers,’ the secret team assembled to stop government leaks after defense analyst Daniel Ellsberg leaked the Pentagon Papers to the press.”

He was instrumental in the Watergate bugging. “A former CIA operative, Hunt organized the bugging of the Democratic headquarters in the Watergate — as well as a break-in at the office of Ellsberg’s psychiatrist. Hunt’s phone number in address books belonging to the Watergate burglars helped investigators — and reporters — connect the break-in to the president and his reelection campaign. Convicted of burglary, conspiracy and wiretapping, Hunt served 33 months in prison,” reported The Post.

Wired magazine dubs Hunt “the country’s most notorious spook who later served time for his role as one of the plumbers in the bungled burglary that later toppled Richard Nixon.” When he died, The New York Times called Hunt a “cold warrior for the Central Intelligence Agency who left the spy service in disillusionment, joined the Nixon White House as a secret agent, and bungled the break-in at the Watergate.” He died in 2007 at the age of 88. He was born in New York to a lawyer and a pianist, the Times reported, eventually entering the U.S. Navy before joining the CIA in the 1940s.

4. Nixon Was Captured on Tape Saying That Hunt Involved a ‘Scab’ That could Uncover a Lot of Things

Richard Nixon made comments on tape that some believe alluded to the Kennedy assassination. Was it possible the president feared that Watergate might uncover the secrets of JFK’s death?

“Nixon knew that Howard Hunt had played key roles in some of America’s darkest mysteries,” reports Salon. “On June 23, 1972—while discussing the Watergate break-in with H. R. Haldeman, his devoted political deputy and White House chief of staff—Nixon was taped saying, ‘Hunt . . . will uncover a lot of things. You open that scab, there’s a hell of a lot of things. . . . This involves these Cubans, Hunt and a lot of hanky-panky that we have nothing to do with ourselves.'”

According to Salon, Nixon used Hunt’s background in an attempt to get the CIA director to shut down Watergate during the scandal’s height. “[t]he President’s belief is that this is going to open up that whole Bay of Pigs thing . . . and it’s going to make the CIA look bad, it’s going to make Hunt look bad, and is likely to blow the whole Bay of Pigs thing . . . and we think it would be very unfortunate for the CIA and for the country at this time,” Salon quoted Haldeman as saying.

Haldeman referred to the “Bay of Pigs thing,” provoking Helms (the CIA director) to say, “The Bay of Pigs had nothing to do with this!” according to Salon. The Bay of Pigs reference was actually a code word, some believe. “According to Haldeman, it was Nixon’s way of referring to the unspeakable—the Kennedy assassination. Other historians have speculated that it was shorthand for the CIA-Mafia plots against Castro,” reported Salon.

5. E. Howard Hunt Once Sued a Magazine For Claiming He Was Involved in the JFK Assassination

gettyThe gravesite of the 35th President of the United States John F. Kennedy, at Arlington Cemetery on November 19, 2013 in Arlington, Virginia.

Those who don’t believe Hunt’s near deathbed confession point out that he told other stories about the assassination in the past and was, to some degree, a shadowy figure. Hunt even went so far as to sue a magazine for claiming that he was involved in the Kennedy assassination. That was in the 1970s, well before Hunt decided to spill the supposed beans to his son.

At first, Hunt won a libel suit against the magazine. “On Aug. 16, 1978, Liberty Lobby Inc. published an article by former CIA officer Victor Marchetti in its magazine, The Spotlight. In that article, Marchetti stated that E. Howard Hunt, also a former CIA officer, was involved in the JFK assassination. Hunt sued Liberty Lobby for libel in federal district court and won,” reports IndyWeek.

In the end, though, the magazine won the case. “However, in the appeals trial, former CIA asset Marita Lorenz testified that on Nov. 21, 1963, the day before the assassination, E. Howard Hunt was in Dallas, where he delivered ‘sums of money for the so-called operation’ to a small group of men that included former CIA agent Frank Sturgis of Watergate fame and Oswald killer Jack Ruby. The federal jury found for Liberty Lobby Inc. and awarded costs to be assessed against Hunt.”

Loading more stories
wpDiscuz
0
0
Would love your thoughts, please comment.x
()
x
| Reply
E. Howard Hunt, the CIA operative caught up in Watergate, confessed to his son that he knew the secrets of the JFK assassination. Listen to audio.