Hurricane Nate made landfall near Biloxi, Mississippi early Sunday with maximum sustained winds near 85 miles an hour. The hurricane caused major flooding and a curfew was in effect until 9 a.m. local time.

Hurricane Nate has now been downgraded to a tropical storm again and is continuing to wreak havoc across Mississippi and Alabama. The storm is currently located about 80 miles north-northeast of Biloxi.

The eye of the storm passed over Kessler Air Force Base, which is where the
53rd Weather Reconnaissance Squad – also known as the Hurricane Hunters – is located.

Even though TS #Nate is headed right toward our home base in Biloxi, Miss., we're still collecting data on the storm for the @NWSNHC pic.twitter.com/uu5sOFNWAz

Tropical Storm Nate’s center will continue to move inland across the Deep South, Tennessee Valley, and central Appalachian Mountains through Monday. Maximum sustained winds have decreased to near 45 miles per hour.

This video, posted to Facebook by the City of Biloxi, show the massive flooding the storm surges caused there:

The U.S. Navy has sent two ships, the amphibious assault ship USS Iwo Jima and the amphibious transport dock ship USS New York, with elements from the 26th Marine Expeditionary Unit, to the Gulf of Mexico to help with recovery efforts.

President Donald Trump has approved federal disaster funding for the state of Mississippi.

The Biloxi Fire Department said several streets are closed due to flooding:

Cedar Lake at the bridge/ Ya Momma’s house

North side of Beach at Porter

Division Haise to Lameuse is flooding

Back Bay Bl Between Lee and Nixon are flooding over

Lee St to Esters to Jefferson is starting to flood

The City of Biloxi has opened several storm shelters: 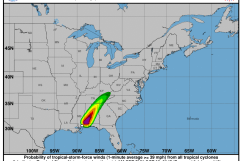