Hurricane Ophelia is bearing down on Ireland as the rare eastern Atlantic storm targeted parts of Europe on Monday. The hurricane made landfall as a Category 3 storm with maximum sustained winds of 100 miles an hour.

The hurricane, which has been downgraded, has caused three deaths, according to Reuters. One woman was killed by a falling tree while she was in her car and a man was killed trying to clear a fallen tree with a chainsaw. AFP reported that another man was killed while driving in his car.

Met Eideann, the Irish weather service, warned people to stay in inside during the storm. Schools across Ireland are closed. More than 230,000 homes and businesses are without electricity and more than 100 flights have been cancelled, Reuters reported.

Visible satellite images of Storm #Ophelia
Data from 10am to 2:15pm pic.twitter.com/wSg0CBuM0V

“Very stormy, with violent and damaging winds, most severe in exposed hilly and coastal areas,” according the the weather service’s latest advisory. “The worst of the winds, which have been over Munster and south Leinster this morning, will quickly extend to the rest of the country this afternoon. Spells of heavy rain and thunderstorms in places also and storm surges along some coasts, leading to flooding.”

Hurricane Ophelia is the 15th named storm of the Atlantic hurricane season.

Images from our Roches Point weather webcam.
Trees are coming down.
Roches Point has a mean wind speed of 111km/h
Gusts of 156km/h#Ophelia pic.twitter.com/NEsTvuob6M

Dramatic footage of the roof being blown off #Douglas Community School's gym on southside of #Cork city #Ophelia #iestaff pic.twitter.com/0dSw5w1rTj

The Dublin Fire Brigade warned people to stay inside during the storm, especially tourists trying to take pictures.

There are still people walking the streets, notably tourists. Everyone should take shelter at this stage while #Ophelia is at its strongest

"This is going to get worse" – Police are asking people to heed their warnings about Storm #Ophelia. @skydavidblevins has the latest pic.twitter.com/XkxBe6szMP

The 2017 Atlantic hurricane season has been one of the top 10 busiest of all time, according to The Weather Channel.

Here is a list of all the named storms so far this year, according to the National Hurricane Center:

The next storm that forms in the Atlantic Ocean will be named Philippe.

Hurricane season runs from June 1 to November 30. The peak of the season is typically on Sept. 10, according to the National Oceanic and Atmospheric Association. 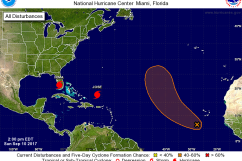 When Does Hurricane Season End?

Loading more stories
wpDiscuz
0
0
Would love your thoughts, please comment.x
()
x
| Reply
Hurricane Ophelia is bearing down on Ireland. Here's what you need to know.