There was a shooting in lower Manhattan on Tuesday and a truck has rammed into several people, killing eight and wounding a dozen others. The deadly incident happened just after 3 p.m. Eastern time at West Street and Chambers Street near the World Trade Center.

“Let me be that clear based on the information we have at this moment, this was act of terror” de Blasio said. “And a particularly cowardly act of terror aimed at innocent civilians, aimed at people going about their lives who had no idea what was about to hit them.”

“We have been tested before as a city very near the site of today’s tragedy. And New Yorkers did not give in in the face of these kinds of actions. We will respond as we always do. We will be undeterred,” he said.

There have been several reports that the shooter yelled “Allahu Akbar!” in Arabic. The NYPD says it has a suspect in custody who “exited the vehicle displaying imitation firearms & was shot by NYPD.”

The truck, which was a rented Home Depot truck, jumped the curve around Houston Street and drove south along a bike path on the West Side Highway for several blocks. Police are checking to see if the truck had any explosives inside.

The streets were filled with people, many preparing to celebrate Halloween. One witness told the New York Daily News she thought it was just a prank.

“We thought the guns were fake and it was a Halloween prank,” said Stuyvesant High School student Laith Bahlouli, 14. “There was a car crash, and then he started to shoot.”

New York Governor Andrew Cuomo said the attack was likely carried out by a “lone wolf.”

“The new terrorist tactic which they have called for publicly, are these lone wolves who commit an act of terror. This is all very preliminary – it’s only been a couple of hours. But at this point, there’s no evidence to suggest a wider plot or a wider scheme, but the actions of one individual who meant to cause pain and harm and probably death, and the resulting terror, and that was the purpose,” Cuomo said.

On Wednesday, de Blasio appeared on CNN ad praised New Yorkers for not letting the attack ruin the Halloween celebration.

“Almost a million people came to the Halloween parade in Manhattan. And Chris, you know New Yorkers. The attitude was on of strength, perseverance. People are not going to have their lives changed by some who is trying to undermine our society,” he said.

“And I was so impressed by my fellow New Yorkers. They’re going to go about their lives. We’re not going to let the terrorists ever win. And also, the NYPD deserves incredible credit. The response – immediate. A young officer, five years on the force, steps in, stops this terrorist. You know, New Yorkers are very proud of how the NYPD handled this situation,” he said. 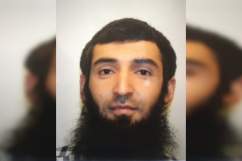