President Donald Trump sent a tweet Wednesday morning about a news report that Hillary Clinton and the Democratic National Campaign helped pay for the so-called ‘Trump Dossier’ that alleges Trump has close ties to Russia.

The president also sent off several tweets about Senator Bob Corker of Tennessee and Senator Jeff Flake of Arizona, both are Republicans who have decided not to run for re-election in 2018. And Trump tweeted about the stock market again.

"Clinton campaign & DNC paid for research that led to the anti-Trump Fake News Dossier. The victim here is the President." @FoxNews

At 7:21 a.m. Eastern time, President Trump tweeted about a Washington Post report that said the Hillary Clinton campaign and the Democratic National Committee helped pay for a dossier of research on Trump alleging that he has deep ties to Russia. BuzzFeed News reported on the existence of the dossier on Jan. 10 just before Trump was inaugurated.

“Clinton campaign & DNC paid for research that led to the anti-Trump Fake News Dossier. The victim here is the President,” Trump tweeted. He also tagged Fox News on the tweet.

Read more about the allegations against Trump here.

"The longer we wait, the more we basically normalize this kind of behavior," Jeff Flake tells @GMA. "And we can't do that. We just can't." pic.twitter.com/rxd85jp7df

President Trump continued his attacks on Republican Senators Bob Corker of Tennessee and Jeff Flake of Arizona. Both senators have said they will not run for re-election in 2018 and have questioned the president’s ability to hold office.

Corker announced he would not run for re-election in September. Earlier this month, Corker called the White House an “adult daycare.” On Tuesday, Flake said he would not seek office again and cited the Trump administration as a major factor in his decision.

“There are times when we must risk our careers in favor of our principles, now is such a time,” Flake said in a speech on the Senate floor. “It is time for our complicity and our accommodation of the unacceptable to end.”

Trump tweeted that the two senators were leaving because “they had zero chance of being elected.” Corker was elected to the Senate in 2006 and Flake was elected to his first term in 2012.

“The reason Flake and Corker dropped out of the Senate race is very simple, they had zero chance of being elected. Now act so hurt & wounded!” Trump tweeted at 7:27 a.m. Eastern time.

The reason Flake and Corker dropped out of the Senate race is very simple, they had zero chance of being elected. Now act so hurt & wounded! 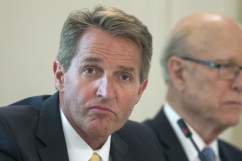 Trump then tweeted about his lunch meeting on Tuesday with Republican senators at the U.S. Capitol to talk about tax reform. Trump said the meeting was a “love fest” and that he was met with “standing ovations.”

The meeting with Republican Senators yesterday, outside of Flake and Corker, was a love fest with standing ovations and great ideas for USA!

“The meeting with Republican Senators yesterday, outside of Flake and Corker, was a love fest with standing ovations and great ideas for USA!”

Working hard on the biggest tax cut in U.S. history. Great support from so many sides. Big winners will be the middle class, business & JOBS

Jeff Flake, with an 18% approval rating in Arizona, said "a lot of my colleagues have spoken out." Really, they just gave me a standing O!

Corker tweeted his support for Flake on Tuesday night:

.@JeffFlake is a true conservative, an outstanding senator and a cherished friend. My statement on his announcement today: pic.twitter.com/SIgVzieEXL

Just Before Noon, Trump Tweeted A Fox News Story About the Stock Market

The segment features Stuart Varney, host of “Varney & Co.” on Fox Business News who says that “business is beginning to boom” in America.

At. 1:19 p.m. Eastern time, as he headed to Dallas, Texas, to get a briefing on hurricane recovery efforts after Hurricane Harvey battered the state in late August, Trump tweeted a message of congratulations to his former White House chief of staff, Reince Priebus.

Congrats to @Reince Priebus, a really good and talented man. We’re proud of you Reince! https://t.co/7AsjAMrSnV

Priebus tweeted on Wednesday that he would be returning to his old law firm, Michael Best and Friedrich LLP as president and chief strategist. Priebus worked there before joining the Republican National Convention.

He will lead the firm’s government affairs group, consulting for corporate clients, but Priebus said he will not do any lobbying work and doesn’t plan to register as a lobbyist. Priebus also said he won’t work for foreign governments.

Trump also tweeted that he sat down for an interview with Lou Dobbs, Host of Lou Dobbs TOnight on the Fox Business Network that is scheduled to air Wednesday night at 7 p.m. Eastern time.

Just interviewed by @LouDobbs. Will be aired tonight at 7pmE on @FoxBusiness. #Dobbs

Trump is in Dallas, Texas, getting an update on Hurricane Harvey relief efforts and participating in a roundtable with Republican National Committee supporters and will give remarks at a Dallas Trump victory reception, according to the White House.

Trump Tweeted About His Upcoming Trip to Asia

Melania and I look forward to being with President Xi & Madame Peng Liyuan in China in two weeks for what will hopefully be a historic trip! pic.twitter.com/uFMonzza7N

The long anticipated release of the #JFKFiles will take place tomorrow. So interesting!

President Trump continued to tweet throughout Wednesday night, including about hurricane relief efforts in Texas, another plug for his interview with Lou Dobbs of Fox Business Network, and a retweet of his daughter Ivanka Trump, who tweeted about tax reform.

Thank you for todays briefing on hurricane recovery efforts here in TX. Keep up the great work! pic.twitter.com/rBel6IWrJl

Interview with @LouDobbs coming up at 7pmE on @FoxBusiness. Enjoy! pic.twitter.com/9V9z015kVl

Working families need #TaxReform & the time is now. This Administration is committed to ensuring all Americans can thrive in our economy. pic.twitter.com/0mJpOP3THj

This will be the biggest TAX CUT in the history of our country – and we need it! #TaxReform
Read more: https://t.co/o3W9bJkz5k pic.twitter.com/JYckXWEmLu 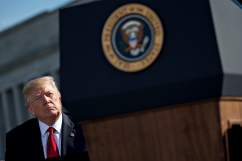 Trump Tweets, October 24: What He Said on Twitter Today

Trump Tweets, October 23: What He Said on Twitter Today