Getty Solar panel debris is seen scattered in a solar panel field in the aftermath of Hurricane Maria in Humacao, Puerto Rico on October 2. President Donald Trump strenuously defended US efforts to bring relief to storm-battered Puerto Rico, even as one island official said Trump was trying to gloss over "things that are not going well," two weeks after devastating Hurricane Maria left much of the island without electricity, fresh water or sufficient food.

A small energy company in Montana recently landed a $300 million contract to help restore portions of Puerto Rico’s electrical infrastructure after the destruction caused by Hurricane Maria. Nearly 75 percent of the island state is still without power a month after the storm.

Whitefish Energy, a company based in Whitefish, Montana, announced October 19 that it received approval and ratification by the Puerto Rico Electric Power Authority’s Board of Governors to continue working “to repair and reconstruct electrical transmission infrastructure on the island.”

Whitefish, which was founded in 2015 and had just two employees when Maria ravaged Puerto Rico, is based in the hometown of Interior Secretary Ryan Zinke. The contract is worth $300 million over the next two years. It comes at a time when there are major concerns about bankrupt Puerto Rico’s spending as it tries to recover from the devastating damage caused by Maria.

But the process the contract went through has drawn much scrutiny, and lawmakers have called for an investigation into the matter.

Here’s what you need to know about the company:

US Representative at large from Montana, Ryan Zinke arrives at Trump Tower on December 12, 2016 in New York.

Zinke told The Washington Post that he knows Whitefish CEO Andy Techmanski on a personal level, but only because they both live in a small town “where everybody knows everybody.”

The Post reported that one of Zinke’s sons worked a summer job at one of Techmanski’s construction sites in the past, clarifying that he worked as a “flagger.” Zinke’s office clarified to The Post that the former lawmaker didn’t play a role in the company securing the Puerto Rican contract, and Techmanski also said he wasn’t involved.

On October 27, Zinke’s office released a statement reiterating that he had nothing to do with Whitefish landing the contract.

“Any attempts by the dishonest media or political operatives to tie me to awarding or influencing any contract involving Whitefish are completely baseless,” the statement said. “I welcome any and all investigations into these allegations, and encourage the Interior Department’s Inspector General to investigate this matter fully.”

I had absolutely nothing to do with Whitefish Energy receiving a contract in Puerto Rico. I welcome all investigations into the allegations pic.twitter.com/JQgVFR7Fp6

Zinke served as the representative for Montana’s at-large congressional district from 2013 until 2015 after serving in the state Senate. He’s the first Navy SEAL to be elected into the U.S. House of Representatives and was nominated as President-elect Donald Trump‘s Secretary of the Interior on December 13, 2016. His nomination was confirmed by the Senate in a 68-31 vote on March 1. 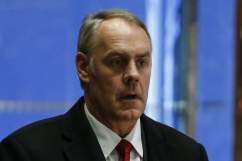 Continuing to repair lines and towers each day in #PuertoRico. Great progress this week on lines in #Caguas! pic.twitter.com/K3MZHQbLeJ

Whitefish has been working for PREPA to repair the electrical grid since September 26, and the company has been providing updates to the power restoration effort on its social media accounts. When Maria hit the island, it had just two full-time employees and a single page on its website featuring an image of linemen working from a helicopter.

The company announced October 24 that it’s continued to make progress in restoring the electricity by digging holes and installing new equipment.

The company said in its initial press release that it sent 300 employees and subcontractors to temporarily relocate to Puerto Rico after Maria. With the catastrophic damage that was caused, it’s also “mobilizing an additional 700 people to support the critical mission of restoring power to Puerto Rico as quickly as possible.”

The release states that the company is working with PREPA engineers and they have repaired several miles of transmission and distribution lines that were damaged by the storm.. The team is “within days of energizing and restoring power to multiple Puerto Rico towns and communities.”

With the new contract, it’s expected that close to 1,000 workers will be sent to the Puerto Rico to help in the repair effort.. 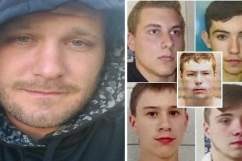 3. There Was No Contract Bidding Process in the Restoration Effort

Techmanski told The Post during an interview that his company emerged as the lead candidate to land the Puerto Rico contract from internal discussions with PREPA before and after the storm hit. There was no formal bidding process. Instead, he said that he’d been in talks with the utility prior to Maria and discussed possible scenarios in the recovery effort if the damage was bad.

According to The Economist, the typical process in emergency situations like these involve states and municipalities contacting a “mutual aid network” which then mobilizes as many repairmen as needed. However, as Mike Hyland of the American Public Power Association told The Economist, that never happened.

Whitefish had started its work in Puerto Rico following Hurricane Irma, and it was likely the cheapest option, according to multiple media reports.

The process of obtaining the contract continues to get criticized on Capitol Hill. At a press briefing October 27, Press Secretary Sarah Huckabee Sanders was asked if the federal government had anything to do with the contract. She denied any collusion in her response.

“This is a contract that was determined by the local authorities in Puerto Rico, not something that the federal government played a role in,” Sanders said. “But as we understand, there is an ongoing audit and we’ll look forward to seeing the results of that later.”

Two days earlier, San Juan Mayor Carmen Yulin Cruz called for Whitefish’s contract to be cancelled, which prompted the company to threaten the withdrawal of its workers.

“The contract should be voided right away, and a proper process which is clear, transparent, legal, moral and ethical should take place,” Cruz said during during an interview. “It seems like what the Puerto Rican people are going to be paying for, or the American people are going to be paying for, is an intermediary that doesn’t know what is at stake here and that really has to subcontract everything. What we need is somebody that can get the job done and that has the expertise to get the job done.”

Whitefish, which has been active on social media with the work it’s performing in the country, released a statement in response to Cruz’s criticism. It said the company shares the same frustration the mayor has, “but her comments are misplaced.”

“We are making progress and doing work when others are not even here,” the statement read. “We find her comments to be very disappointing and demoralizing to the hundreds of people on our team that have left their homes and families and have come here to help the people of Puerto Rico.”

We share frustration with Mayor Cruz on the situation in Puerto Rico, but her comments are misplaced. pic.twitter.com/rIzxIjOcfQ

The tensions between the two parties didn’t end there, though. Cruz tweeted out the Whitefish statement with a comment saying: “You would think I am the only one in the world that has commented on this. What is it about women having an opinion that irritates some?”

You would think I am the only one in the world that has commented on this. What is it about women having an opinion that irritates some? pic.twitter.com/XxGNLomjQy

Cruz followed up the tweet with another implying that Whitefish may be “afraid what we will find” about the contract when it gets examined.

If @WhitefishEnergy feels that asking for transparency is ”misplaced”, what are they afraid we will find.

Whitefish commented back with a tweet of its own, saying they have “44 linemen rebuilding power lines in your city and 40 more men just arrived. Do you want us to send them back or keep working?”

We’ve got 44 linemen rebuilding power lines in your city & 40 more men just arrived. Do you want us to send them back or keep working?

Cruz then accused the company of not treating her city with the “diligence it deserves,” adding it has political motivations.

@WhitefishEnergy implies that you will not treat the City of San Juan with the diligence it deserves. Thus admitting political motivations.

Mayor, you called for our work to end. We do not want to leave the island without help. We’re committed to restoring power to Puerto Rico.

4. The Largest Previous Contract the Company Handled Was a Federal Contract Worth Over $1 Million

Previously, the largest contract Whitefish handled was a $1.3 million electrical upgrade in Arizona. It was a contract awarded by the Energy Department which included replacing and upgrading portions of a transmission line. Records obtained by The Post indicated that they had 11 months to complete work on the 4.8-mile long Arizonan transmission line.

Puerto Rico’s selection of Whitefish has drawn criticism from some members of Congress and the federal government.

“The fact that there are so many utilities with experience in this and a huge track record of helping each other out, it is at least odd why (the utility) would go to Whitefish,” former Energy Department official Susan F. Tierney told The Post. “I’m scratching my head wondering how it all adds up.”

Whitefish officials said that the company’s experience in mountainous areas give it a leg up on other companies.

Whitefish is a division of Comtrafo S.A., an energy equipment distribution company based in Brazil. Its primary investor, HBC Investments, was founded by Joe Colonnetta, who was a “major” donor to Trump’s 2016 presidential campaign. It’s also backed by Flat Creek Capital.

Whitefish was started as a venture for Comtrafo to build a transformer plant in Montana, but the project never came to fruition.

Contribution records obtained by The Daily Beast indicated that Colonnetta gave $27,000 to Trump’s primary election bid and another $20,000 to the Trump Victory Super PAC during the general election. After Trump’s victory over Hillary Clinton in November 2016, Colonnetta’s wife, Kimberly, gave another $33,400 to the Republican National Committee.

HBC Investments is a firm that partners with management teams and has invested over $100 million in companies across various sectors.