Yesterday, commercial truck and Uber driver Sayfullo Saipov, was indentified as the suspect involved in the ramming of a Home Depot rental truck into several people in lower Manhattan. According to the New York Times, this “act of terrorism” left eight people dead and eleven injured. Saipov reportedly ran his truck into a crowded bike path along the Hudson River in NYC before exiting the vehicle. He then ran onto the highway waving a pellet gun and paintball gun in the air as he shouted “Allahu akbar,” which is Arabic for “God is great.” Police shot Saipov and he remains in critical condition. Mayor Bill de Blasio confirmed in a statement to the press that, “Based on information we have at this moment, this was an act of terror, and a particularly cowardly act of terror aimed at innocent civilians.” Among the victims was a 31-year-old Belgium woman named Ann-Laure Decadt. Read on for more information on Decadt and the tragic incident.

1. Decadt Leaves Behind a Husband and Two Sons

The NY Daily News has reported that Decadt is the mother of two sons and she leaves behind a husband named Alexander Naessens. Naessens told the NY Post that, “This loss is unbearable and cannot be overcome. She was a wonderful wife and the most beautiful mom of our 3-month and 3-year-old sons.” The Boston Herald has reported that Naessens found out about his wife’s death via a phone call from a lower Manhattan hospital and that he asks for privacy for his family at this time. He and his wife Decadt had been married since 2012. Decadt had several photos from their wedding post on her Facebook page.

In a report by Nieuwsblad, Decadt’s husband and family recalled that, “I was contacted by Presbyterian Hospital Lower Manhattan around 20.40 p.m. They said there was an attack and Ann-Laure died. She sat on the bike and was apparently surprised by the danger that came from behind.” A book to share people’s condolences for Decadt and her family is open next to a portrait of her in a community center in Staden, Belgium, as reported by Patch.com.

2. Her Mother and Sisters Were Biking With Decadt When the Incident Occurred

The NY Times reports that Decadt was bicycling with her mother and her two sisters at the time of the attack. And, though her mom and sisters were left unharmed, they were “surprised by the danger that came from behind.” Decadt and her family were bicycling near Ground Zero in Manhattan. In the truck of Saipov, who plowed into the crowd which left Decadt dead, the Evening Standard reports an Islamic State flag and handwritten notes pledging allegiance to ISIS were found by police. After Decadt was hit, she was taken to a hospital with significant injuries and was later pronounced dead, as reported by People.

3. She Was a World Traveler

Decadt came from a relatively small town, but she traveled the world and appeared to love adventure. She posted photos on her Facebook page of her bungy-jumping in South Africa and long-distance biking in Benin. Other victims in the attack, in addition to Decadt, included five Argentinians, a Manhattan software engineer and a man from New Jersey, according to Patch.com. The five Argentinians were friends and they were identified by the Argentine foreign ministry as Hernán Diego Mendoza, Diego Enrique Angelini, Alejandro Damián Pagnucco, Ariel Erlij and Hernán Ferruchi. A sixth friend of theirs, Martin Ludovico Marro, was left injured but survived the attack. The former classmates were celebrating their 30th anniversary of their graduation and an official statement released by the ministry reads, “Five of the victims were from Rosario — young entrepreneurs, members of the city’s society. I imagine they had beautiful families.”

4. Three Other Belgians Were Injured In the Attack

Belgian Deputy Prime Minister Didier Reynders said that three others from Belgium were injured in the attack. And, in an interview with Nieuwsblad, Reynders said he is with the family of Decadt and that, “We are doing everything we can to help them.” Decadt’s husband even sought out help from a mental health professional for advice on how to break the sad news to the couple’s 3-year-old son.

FDNY Commissioner Dan Nigro said that six people were pronounced dead at the scene of the attack. Darren Drake, 32, of New Milford, New Jersey, and Nicholas Cleves, 23, of New York were two other victims who lost their lives in the incident, according to CNN. Superintendent Michael Polizzi of the New Milford Public School District released the following statement about Drake upon hearing the news, “Darren was a good man with a soft touch and huge heart. He is respected for his unwavering commitment to the children of New Milford and their education. In addition to his insights into the needs of students, he brought to the board significant business acumen, intelligence and humor. He was friendly, fully engaged and forward-thinking.”

5. The Mayor of Decadt’s Village Said Their Community Is in Shock

Francesco Vanderjeugd, the mayor of Staden, Belgium, has been a spokesperson for Decadt’s family and he told the press that, “This is a shock in our city, it is a small community of only about 11,000 people.” Vanderjeugd said that Decadt had planned on leaving the United States on Friday after spending time with her relatives. He also stated that Decadt’s family would not be flying the U.S. and that they would have her body sent back to Belgium. It is not known when Decadt’s body will be shipped back home to Belgium. According to the NY Daily News, Vanderjeugd sent Decadt and her family a message prior to their trip to the U.S., wishing them well on their journey. Vanderjeugd’s message read, “Wow, you’ll have a great time there, with Halloween and the New York marathon and all.” In addition to Vanderjeugd reporting on the family and his personal sadness, several in Decadt’s community have expressed their own grief online. In the below post, a man named Peter Herman wrote a message that translates as, “Ann-Laure Decadt I will never forget you!! What a cool lady was you!!! Sadness!!!”

Francesco Vanderjeugd also told Nieuwsblad that, “It’s so rough that someone who is on vacation there and enjoying her free time just needs to come to life by such an act. I have bitter little words for it.” 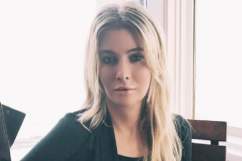 Loading more stories
wpDiscuz
0
0
Would love your thoughts, please comment.x
()
x
| Reply
The victims of the reported NYC terrorist attack yesterday have been released. A Belgium mother named Ann-Laure Decadt is listed as a victim.