Charles Manson, the notorious criminal who has been serving time in prison since the 1970s, has died. He was known for manipulating his “crime family” into doing a number of murders on his behalf. One of his sons, Charles Manson Jr. (who later took on the name Jay White) committed suicide, possibly because he couldn’t live with the burden of his father’s crimes.

20 year-old Charles Manson at his wedding to Rosalie Willis. Wonder what happened to this handsome young man… pic.twitter.com/WWFQKpU5NW

Charles Manson Jr. was born in 1956 to Charles and his first wife, Rosalie Jean Willis. He was Manson’s first child. When Manson and Willis married in January 1955, Willis was a hospital waitress. She was only 15 and Manson was 20. Manson later said that he and Willis had genuine marital happiness, even if it only lasted a short time. They moved to Los Angeles when Willis was three months pregnant, and a short time later Manson was put on five years probation for taking a stolen car across state lines. He was later imprisoned at Terminal Island in San Pedro, California, in 1956. Charles Manson Jr. was born while his father was in prison.

From the Vault: How the son of a Cincinnati prostitute became an infamous killer (Charles Manson!) via @Marais_JDhttps://t.co/Tvz5BdU0dF pic.twitter.com/JaakrFFdCB

Charles Manson Jr.’s heritage always bothered him. His name was eventually changed to Jay White, after his stepfather, Jack White. Rosalie Willis had two other sons with Jack White: Jesse J. White, born in 1958, and Jed White, born in 1959. Jed died of an accidental gunshot wound in January 1971, when he was accidentally shot in the stomach by an 11-year-old friend. They were playing in the home of Louis Morgan when it happened, according to a local newspaper. In August 1986, Jesse died from an overdose in Houston, Texas. He was found dead by his friend in a car in the early morning, after they had been drinking at a bar the night before.

Jay White committed suicide in 1993, when he shot himself on a highway in Colorado. No one was quite sure why he committed suicide, CNN reported. He shot himself in the morning on I-70, on a desolate portion of the highway just west of Kansas. The death certificate only said that he died of a gunshot to the head, self-inflicted, at 10:15 a.m. that day.

Some sources said this was because he couldn’t deal with the violence his biological father had inflicted or the burden of his father’s crimes. His son, Jason Freeman, said he wished he could go back in time and tell his dad that everything was going to be OK. He told CNN that he would want his father to know:  “I want him to know … he missed out on a lot.”

4. White’s Son, Jason Freeman, Is a Kickboxer and Very Open About Being Manson’s Grandson

Freeman is a kickboxer and cage fighter who also works on oil rigs. He “came out” publicly as Manson’s grandchild in 2012 in order to get out from under the shadow of fear and the “family curse,” as he called it. Even in his own family, he was discouraged from talking about his grandfather or asking his grandmother, Rosalie, about him. Freeman now has children of his own.

Growing up, Freeman said that he didn’t know his father, Jay White, very well. In fact, he only really knew him through occasional letters and gifts. He said that he thought White purposefully stayed away because he didn’t want to tarnish his childhood in any way. He told CNN: 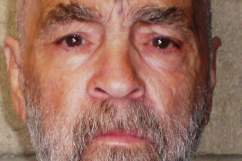 Charles Manson Cause of Death: How Did the Killer Die?

5. In January, Freeman Said He Was Blocked From Visiting His Grandfather

In January, when Manson’s health took a turn for the worse, Freeman tried to visit his grandfather in jail. He posted a video sharing that he was blocked from seeing his grandfather. He said at the time that he was working with lawyers to try to see his grandfather, but was having difficulty. At the time, Manson had intestinal bleeding and doctors wouldn’t operate because they said he was too weak.