Charlie Rose, a prominent journalist and TV host, has been accused of sexual harassment. The Washington Times spoke with eight women who accuse the 75-year-old of making lewd phone calls, walking around nude and attempting to grasp their breasts or genital areas.

All of the women were employees or had aspirations of working for the “Charlie Rose” Show. In the article, the The Post notes that the alleged incidents occurred from the late 1990s through around 2011, and the women ranged in age from 21 to 27-years old.

Rose said in a statement provided to The Post that he apologizes for his conduct and was “emabarassed.” Read his full statement below:

In my 45 years in journalism, I have prided myself on being an advocate for the careers of the women with whom I have worked. Nevertheless, in the past few days, claims have been made about my behavior toward some former female colleagues.

It is essential that these women know I hear them and that I deeply apologize for my inappropriate behavior. I am greatly embarrassed. I have behaved insensitively at times, and I accept responsibility for that, though I do not believe that all of these allegations are accurate. I always felt that I was pursuing shared feelings, even though I now realize I was mistaken.

I have learned a great deal as a result of these events, and I hope others will too. All of us, including me, are coming to a newer and deeper recognition of the pain caused by conduct in the past, and have come to a profound new respect for women and their lives.

As a result of the sexual misconduct allegations, PBS and Bloomberg TV suspended Rose’s shows, and CBS announced it was investigating the allegations.

Rose has been married once in his lifetime, to Mary Rose King. Years after their divorce, Rose met and started a relationship with Amanda Burden, who’s a successful urban planner in the New York area and currently works as a principal for Bloomberg Associates.

Here’s what you need to know about Burden and Rose:

Rose had been married to Mary King from 1968-1980, when they got divorced. It was revealed in 2002 that he’d been in a relationship with Burden for over a decade. An NY Magainze feature on Burden noted that there was a photo of Rose and Burden together in Colorado, where they went to The Aspen Institute every year.

The two haven’t gotten married, but Fortune referred to them as “longtime friends” and “sometimes companions.” The two could be frequently seen at entertainment or business events and have been photographed together at many of them. The Fortune article noted that Rose is the godfather of two of Burden’s grandchildren.

When asked if the two would ever have a child together, Rose told Fortune: “If I was madly in love with someone who offered the opportunity to spend our lives together. I would love to have a child or adopt a child.”

Burden once described her relationship with Rose by saying, “I’m sure couples wonder what to talk to each other about at night. But we don’t. I say, ‘Who was on today?'”

2. Burden is Currently a Principal at Bloomberg Associates

GettyJournalist Charlie Rose and Amanda Burden attend the Broadway Opening night of “The Audience” at the Gerald Schoenfeld Theatre on March 8, 2015 in New York City.

Burden is currently a principal at the international consulting service, Bloomberg Associates. The company was founded by billionaire Michael Bloomberg as a company which assists city governments in improving the quality of life.

In 2014, Burden was elected to serve on the Council for Foreign Relations, a position she still holds. The organization is a nonpartisan think tank with a goal of being a resource for its membership to help them better understand foreign policy situations that face the United States and other countries. The CFR holds numerous events and offers programs to promote and educate the next generation of foreign policy leaders, its website states. 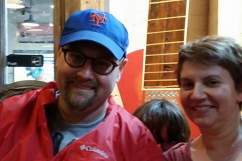 3. Burden Served as the Director of the NYC Planning Department

From 2002-2013, Burden served as the director of the New York City Department of City Planning and also was the chair of the City Planning Commission under Mayor Bloomberg.

While working for the NYC planning department, she pushed to revitalize Lower Manhattan and improve the access to the waterfronts in Brooklyn. She also worked to improve public transportation and was a supporter of the High Line, a redevelopment project.

During her tenure, she oversaw one of the largest comprehensive planning efforts since NYC was rezoned in 1961. The plan she worked on incorporated nearly 5,000 blocks in the city.

In a 2007 profile by The New York Times, reporter Diane Cardwell wrote that Burden played a key role in the revitalization of many parts of NYC.

“Ms. Burden is leaving an indelible legacy of how all five boroughs will look and feel for decades to come,” Cardwell wrote.

Burden’s approach at redevelopment focused on open space and adding shop fronts in Jamaica, Queens. Her former colleagues were high on her, too. Jerold S. Kayden, who worked as the director of the master’s program in urban planning at Harvard Graduate School of Design, said Burton genuinely cared about every detail.

“She cares about each building and its details in a way that no other planning director has that I can remember, and I go back a long way,” Kayden told The Times in the profile. “She’s wise enough to recognize that what I would call small details or granular moves can either enhance or destroy a city. In a funny way she’s the curator of a living, breathing city.”

4. Burden Comes From a Wealthy Family & Rose to Prominence With Her Rezoning Efforts

Burden is the daughter of Stanley Mortimer, who was an heir to an oil company’s fortune. Her mother is Barbara Paley (Babe), who was one of the “swans” Truman Capote featured in La Côte Basque 1965, a controversial chapter published in Esquire magazine in 1975. Burden is also the stepdaughter of William Paley, who served as the CEO of CBS. He helped take the network to new heights from its foundation.

The Times valued Burden’s net worth at over $45 million in 2005, noting that a lot of it sits in a trust fund for her children.

Burden earned a bachelor’s degree from Sarah Lawrence College and an honorary doctorate in public administration from Pratt University.

When she was in her 20s, she married Shirley Carter Burden, who served as an aide to Sen. Robert F. Kennedy for some time before becoming a city councilman. The two got engaged in September 1963, and they got married in 1964. They had two children together in the late 1960s: Flobelle Fairbanks Burden and S. Carter Burden III, who’s the founder of Logicworks. Carter and Amanda got a divorce in 1972.

After their divorce, Burden met and married Steven J. Ross in 1979. Ross was the head of Warner Communications. They ended up getting a divorce just two years after their marriage in 1981.

Burden ended up going back to school and learned the ins and outs of city planning and performing public service. She earned her master’s degree from Columbia University Graduate School of Architecture, Planning and Preservation and wrote her thesis on recycling urban garbage.

One of her first jobs in the industry was under Gov. Hugh L. Carey at the New York State Urban Development Corporation. She then worked as the director of planning for Battery Park City until she was appointed to the City Planning Commission in 1990. She was appointed by City Council President Andrew Stein at the time. Her ideas and effort to rezone saw her career progress within the commission.

However, her time working in the government hasn’t come without some criticism. The Times quoted the executive director of Neighbors Allied for Good Growth in its profile, who said she comes across a model professional, but her results in one area left a lot to be desired.

“If you look at the results of her waving the magic wand of this Greenpoint-Williamsburg rezoning, where residents have been displaced, viable manufacturing jobs have been lost and the neighborhood overrun with construction projects,” Peter Gillespie told the newspaper. “She’s more like the Wicked Witch of the West (as opposed to the Good Witch of the North).”

5. Burden’s Been the Recipient of Various Awards & Honors in her Professional Career

When she was 22-years old — in 1966 — Burden was named to the Best Dressed List of the New York Couture Group. She’s also been the recipient of various awards and honors for her service throughout her career. In 2004, she was awarded the Smithsonian Cooper-Hewitt’s Design Patron Award and was inducted into the American Institute of Certified Planners College of Fellows’ membership in 2008, her biography said.

Burden’s also been involved in philanthropy throughout her career. When she won a $100,000 award for her urban development efforts, she donated the prize money to ULI so it could create an annual award that honors the transformation of public spaces across the globe.