Big disturbance with armed police on the Strand. No idea what’s happening yet pic.twitter.com/qaUGIjg7Yc

An incident at Covent Garden in London caused complete panic and prompted an incredible response from police on Wednesday evening. Witnesses in the area say that a black taxi jumped the curb and rammed into people walking on the sidewalk. Not long after the incident occurred, dozens of law enforcement officials were on the scene. Police cars, ambulances, and fire trucks lined the streets around the area within minutes.

Photos from the incident showed a taxi up on a busy London sidewalk with people all around it. Some photographs even showed bodies on the ground next to the vehicle. Videos from the scene showed people running away from the area, leaving shops and restaurants and seeking cover somewhere safe.

According to Westminster police, the incident is “not terror related.” Although police seem confident about the nature of this event, they have asked people to stay away from the area and have even asked some people to leave. An investigation is said to be underway at this time. The driver of the cab is cooperating, according to the department. It is unknown whether or not he will be arrested or if he will face any charges related to the incident, which does not appear to be intentional, according to police.

“Officers and the other emergency services attended the scene. We are aware of injuries but await further confirmation. The driver of the taxi stopped at the scene and has been detained by police. This is being treated as a serious road traffic collision, and not thought to be terrorist related,” a Met Police spokesperson told the media.

Police have confirmed that at least two people are being treated for injuries. The extent of those injuries are unknown at this time.

“We are scaling back our cordon. Driver of black cab is assisting police. [Two] casualties are being treated by LAS assisted by LFB,” Westminster Police posted on Twitter a short time ago.

Below are some photos and videos from the scene at Covent Garden:

#london #Strand toward temple being blocked off police pic.twitter.com/5bU1FnF1xH

Just came within meters of being hit by a vehicle that mounted the pavement and ploughed into people. #CoventGarden people down under taxi ? pic.twitter.com/1J9dtK7xUb

#CoventGarden View from inside Christopher's restaurant of people running away from Covent Garden. pic.twitter.com/4bZ1xolBnY

London’s Covent Garden is a popular tourist spot that is filled with shops and restaurants. Often, there are street performers and other theatrical productions going on in the area, which makes it a prime spot for visitors traveling from all over the globe.

This apparent accident comes just one day after a man by the name of Sayfullo Saipov was identified as the suspect in a Halloween terror attack in New York City. Police say that Saipov drove a rental truck into pedestrians along a bike path in Manhattan, killing eight people and injuring more than a dozen others. Saipov was shot in the abdomen by police and was taken into custody.

Became many recent acts of terror have come in the form of a driver running people over, no event that appears to be similar is taken lightly. There have been several terrorist attacks in Europe in which a car or truck has run into people on the street or sidewalk.

In June 2017, for example, a terror attack on the London Bridge, in England, left eight people dead after a truck drove into a crowd of people. 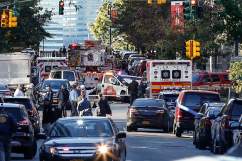 Read More
London
A taxi jumped the curb and ran into people in Covent Garden in London on Wednesday. Police don't believe this incident is terror-related.