Students light candles on a menorah during the Jewish holiday of Hannukah, the festival of lights, in the central Israeli city of Bnei Brak near Tel Aviv on December 28, 2016. (Getty)

While Hanukkah is a very well-known holiday, the spelling can still be very confusing. Should the name of the holiday be “Chanukah,” or should it be “Hanukkah”? Is that “C” at the beginning of the name necessary? Are the 2 “K”s necessary? The simple answer to these questions is no because there is not a correct way to spell the Festival of Lights’ true name in the English language.

The word “Hanukkah” is a transliterated version of the Hebrew term for the holiday, חנוכה. The word is transliterated, which means that it has been spelled out based on how it sounds in English letters. So, when you transliterate the Hebrew word, you get “Hanukkah” or “Chanukah,” depending on how you pronounce the word.

The first letter in the Hebrew word is chet, but the “ch” in the word does not sound like the “ch” sound at the beginning of the word “child.” The sound is more like the sound that you would use when you pronounced Johann Bach’s last name. There is no equivalent to this sound in the English language, but “H” is close enough. On the other hand, we use “ch” at the end of other words to replicate the sound that you would hear in Bach’s last name, so we can use a “Ch” at the start of the word. The word could even be spelled like Xanukah if you wanted to spell it that way.

The spelling “Hanukkah” is more popular in the United States presently. According to Time Magazine, “Hannukkah” became more popular on the internet in 2011. If you look at the graph below, you’ll see that the search traffic for Hanukkah is much greater than that for Chanukah and has been that way since before 2004.

Above: Red is for Chanukah and the blue is for Hanukah. Chart courtesy of Google Hot Trends.

There is no official spelling for “Hanukkah,” but the Hebrew Union College Jewish Institute of Religion notes that the Library of Congress considers “Hanukkah” the preferred spelling.

Another common name for Hanukkah or Chanukah is the “Festival of Lights.” The name remembers the rededication of the second Jewish temple in Jerusalem in the 160s BCE/BC. Hanukkah is the Hebrew and Aramaic word for “dedication.”

The holiday starts on the 25th of Kislev, which is a month in the Jewish calendar that occurs at almost the same time as December. The Jewish calendar is lunar, though, so Kislev can happen anytime from late November to late December.

The dates of Hanukkah change each year, but it always runs for 8 days. For many, this means 8 days of delicious food that is traditionally served on the holiday. This year, the holiday begins on Tuesday, December 12 and will conclude on Wednesday, December 20. 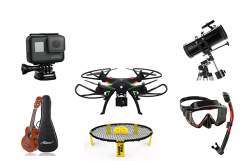