Republican Roy Moore posted a “campaign statement” on YouTube Wednesday night in which he declared that he is still not conceding the Alabama special election to Democrat Doug Jones, despite Jones being declared the unofficial winner. You can watch the video above.

“We are indeed in a struggle to preserve our republic, our civilization and our religion and to set free a suffering humanity. And the battle rages on,” Moore told his supporters in the nearly 5-minute video. “In this race, we have not received the final count​ to include ​military and provisional ballots. This has been a very close race and we are awaiting certification by the Secretary of State.”

According to the unofficial results posted on the Alabama Secretary of State’s website, Jones holds a 49.92 percent (671,151 votes) to 48.38 percent (650,436 votes) lead. A recount would only be automatically triggered if the margin of victory is 0.5 percent or less.

Secretary of State John Merrill, a Republican, told CNN late Tuesday that it would be “highly unlikely” for Jones to not be certified as the winner of the election.

On Wednesday, Merrill told the Montgomery Advertiser that he is skeptical that overseas votes will be enough to alter the result.

“I don’t know how many ballots are going to be returned from overseas voters or how many provisional ballots there are, but I’m confident not all of them are going to be for one candidate,” he told the newspaper.

Moore told his supporters in the Wednesday night video the race was watched across the nation because “the heart and soul” of the country is at stake.

He added, “Like most Americans I’m concerned about the future of our country, both financially and morally”

Moore said that after Donald Trump became president he “saw a window of hope and an opportunity that we could return to our founding principles and the Constitution of the United States, which has governed us for over 200 years. Our forefathers recognized in the Declaration of Independence that all men, and women, are created equal. And endowed by our creator with certain unalienable rights, that among these are life, liberty and the pursuit of happiness.”

But Moore said “that American dream has been tainted by corrupt politics and a government that has become out of control and out of touch with the people.” He said those rights have been replaced by “abortion, sodomy and materialism.”

He said “we have forgotten God” and “we have stopped prayer in schools, we have murdered over 60 million of our unborn children, we’ve redefined marriage and destroyed the basis of family, which is the building block of our country. Our borders are not secure. Our economy is faltering under an enormous national debt and we have a huge drug problem. We’ve even begun to recognize the right of a man to claim to be a woman and vice versa. We’ve allowed judges and justices to reign over our Constitution and we’ve become slaves to their tyranny. Immorality sweeps over our land.”

Moore referenced the accusations that he molested young girls, saying, “even our political process has been infected with baseless and false allegations, which have become more relevant than the true issues which effect our country.

He also said, “This election was tainted by over $50 million from outside groups who want to retain power in their own corrupt ideology. No longer is this about Republican or Democrat control. It’s truly said there’s not a dime’s worth of difference between them. It’s about a Washington establishment that will not listen to the cries of its citizenry. And the battle rages on.”

Moore said he and his supporters must “stand against those who would take from us our country.”

Moore did not give a concession speech Tuesday night, instead telling his supporters to hold out support.

“But we also know that God is always in control,” Moore said. “Part of the problem with this campaign is we’ve been painted in an unfavorable and unfaithful light. We’ve been put in a hole, if you will.”

Moore told the crowd, “We’ve got to wait on God and let this process play out. I know it’s late, we can’t wait and have everybody wait ’til after 11’o clock, but the votes are still coming in and we’re looking at that. … It’s not over and it’s going to take some time.”

Jones delivered a victory speech to his supporters Tuesday night. 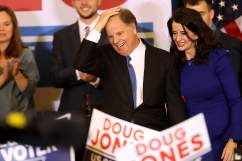 Loading more stories
wpDiscuz
0
0
Would love your thoughts, please comment.x
()
x
| Reply
Roy Moore has posted a new video saying he is not conceding in the Alabama special election for the U.S. Senate, despite Doug Jones appearing to have secured victory.