The Thomas Fire located in Ventura County, California, has spread to over 155,000 acres as of December 9. The fire is raging along Highway 150 near Santa Paula, according to the Los Angeles Times. It was first spotted near Steckel Park, which is located at 8080 Mistletoe Road, just off of Highway 150.

“Active backing fire with short runs when in alignment with topography and wind have hampered containment efforts. The fire continues to threaten structures in various parts of the cities of Ventura, Ojai, Casitas Springs, Santa Paula, Carpinteria, Fillmore and the unincorporated areas of Ventura County and Matilija Canyon. The fire is expected to spread towards Santa Barbara County, Sespe Wilderness and the Sespe Condor Sanctuary. Although a Red Flag Warning will remain in effect for the area, for today the NE winds will diminish in the afternoon hours with week onshore flow developing. Firefighters continue to work aggressively to protect life and property while working on control efforts around the fire perimeter,” read the latest update, posted on Ready Ventura County.

The latest evacuation orders for Santa Barbara County are below.

Fire officials do not know how the fire started.

On December 4, the Public Information Officer for the Ventura County Fire Department tweeted that there was a brushfire that was consuming about 50 acres “with a rapid rate of a spread” reported just before 6:30 p.m. Pacific time. Within two hours, the fire had spread to over 500 acres, the high winds in the area to blame. Now, fire officials say that over 65,000 acres are involved in this out-of-control blaze. According to CAL Fire’s website, 12,000 structures are currently threatened.

On Monday, December 4, students at Thomas Aquinas College were evacuated as a precaution.

“A large brush fire has struck the area around Steckel Park, just south of the Thomas Aquinas College campus. As a precaution, all students are being evacuated to nearby homes. Please pray for the safety of all those affected,” the school posted on its website. The school then took to Twitter to post an update that everyone was safe.

*** FIRE UPDATE ***
The precautionary evacuation of campus is complete, and everyone is safe, but the #ThomasFire rages on. St. Thomas Aquinas, pray for us!

Several homes and buildings in the area are also in danger at this time. According to ABC 7, a campground north of Santa Paula had also been evacuated as had some residents.

“About 150 buildings have been destroyed, the sheriff’s office said, and more than 7,700 homes in Ventura and Santa Paula were under mandatory evacuation as fire officials warned the powerful winds could push flames further into Ventura,” reports CNN.

Additionally, Route 150 had been closed between Santa Paula and upper Ojai.

On Sunday, December 3, the National Weather Service in Los Angeles posted a warning about the severe wind conditions in Southern California.

“Damaging winds expected during the #SantaAnaWinds coming to #SoCal, with the strongest winds over the mountains [Monday] night into Tue. Secure outdoor items, be wary of strong crosswinds on area roads,” read the update. These wind conditions are expected to continue through the weekend.

“This is exactly what we have prepared for. This is not a surprise by any means,” Ventura County Fire Capt. Stan Ziegler told the Los Angeles Times.

The following evacuation shelters have been set up to house those who need to evacuate. 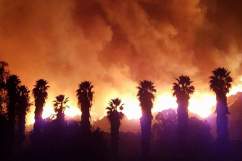