CNN/Twitter CNN's Jake Tapper (left) and Roy Moore's Ted Crockett (right), after Crockett was informed that swearing on a Christian Bible is not mandatory for elected officials (CNN/Twitter)

As votes continue coming in during Alabama’s special senatorial election, CNN’s Jake Tapper interviewed Ted Crockett, Roy Moore’s spokesman. Among other things, Crockett admitted that Moore “probably” still thinks homosexual conduct should be illegal, and also tried offering a justification for Moore’s previous statements that Muslims should not be allowed a serve in Congress (a justification based on a bad misunderstanding of United States law, which Tapper quickly rectified).

The full ten-minute interview is above, but @TheLeadCNN also tweeted video snippets of certain key highlights. Here is Crockett arguing that Moore was right to say Muslims cannot hold elected office because they cannot ethically swear on a Christian Bible, which (according to Crockett) is mandatory for all elected office-holders. Crockett was literally struck speechless after Crockett told him that people can be sworn in on any text they choose:

Roy Moore campaign spokesman responds with silence when asked if he knew people can be sworn in with a text other than the Christian bible pic.twitter.com/B65qIKBjlI

TAPPER: Judge Moore has also said that he doesn’t think a Muslim member of Congress should be allowed to be in Congress. Why? Under what — under what provision of the Constitution do you…

CROCKETT: Oh, no. I swore on the Bible, I’ve done it three times, Jake.

TAPPER: I’m sure you have, I’m sure you picked a Bible, but the law is not that you have to swear on a Christian Bible. That is not the law.

TAPPER: All right. Ted Crockett, with the Moore–

CROCKETT: I don’t know, I know that Donald Trump did it when we made him president–

TAPPER: Because he’s Christian and he picked it. That’s what he wanted to swear in on.

(In 2007, then-newly elected Congressman Keith Ellison of Minnesota swore his oath of office on an antique Koran which once belonged to Thomas Jefferson.)

The next tweet shows Crockett saying “probably” when Tapper asked if Roy Moore still thinks homosexual conduct should be illegal, and citing “two or three thousand years of history” as justification. “It’s just a sin, okay? …. You seem to want to take the whole, 2,000 or 3,000 years of our history and y’all want to throw it out the window as if you’re going to make your own rules, your own man-made rules and do whatever you want in sin, and that’s part of the problem we’ve got in Washington, D.C. today, Jake. We’ve got too many people winging up there. They’re fooling with women they shouldn’t be fooling with, they ought to love their wives. Roy Moore loves his wife.”

Does Roy Moore think that homosexual conduct should be illegal?

Homosexual behavior actually was illegal in certain U.S. states until the Supreme Court’s 2003 Lawrence v. Texas decision, which struck down a state law banning consensual adult sodomy. In 2005, Roy Moore was interviewed by C-SPAN anchor Bill Press, and Press asked Moore if he still thought homosexual conduct should be legal despite the ruling in Lawrence v. Texas.

Moore said, “What I think is that it was illegal under the law, that the Supreme Court usurped the role of the legislature and ruled something about our moral law that is improper, and that’s what we’re finding the Supreme Court and the federal district courts are doing daily. They’ve usurped the moral prerogative, now, if you want–”

Press cut in to say, “I don’t understand your answer. I think it’s a yes or no. Do you think that homosexual–homosexuality, or homosexual conduct should be illegal today? That’s a yes or no question.” 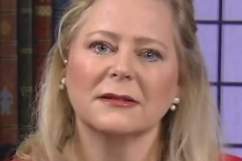