Helen Marrone, 48, has been by Doug’s side throughout most of his coaching career, including the 53-year-old’s time as the head coach of the Syracuse Orange, the Buffalo Bills and now the Jacksonville Jaguars.

Here’s what you need to know about Helen Marrone:

1. Helen & Doug Met Through Her College Roommate, Who Is Now Married to Texans Coach Bill O’Brien After Doug Introduced Her to Him

Helen Marrone met her husband through her Boston College roommate, Colleen, according to the Houston Chronicle. Doug Marrone returned the favor by introducing Colleen to her husband, Houston Texas head coach Bill O’Brien.

The couple met while Helen was living in Tennessee after college. Her roommate was still living in Boston and working in the athletic department at Northeastern University, where Doug Marrone was the offensive line coach.

“(Colleen) called me out of the blue and said, ‘I think there’s a guy you need to meet,'” Helen Marrone told the Chronicle. “And I thought it was funny, because he lived in Boston. I knew she had vetted him pretty well at that point.”

After the 1994 college football season, Doug Marrone took a job at Georgia Tech and was headed south.

Colleen told the Chronicle that she told Marrone, “You should meet my friend Helen. What could happen?”

After they met, the two began a long-distance relationship. Doug eventually introduced Colleen to one of his coaching friends, Bill O’Brien, and the two couples have remained friends.

“Not only are (the Marrones) our close friends, but they also can appreciate the unique position that we’re in as a football family,” Colleen told the Chronicle. “There’s things that they get that some of my other friends just don’t, because they haven’t experienced it, like going through a bad season or all the ups and downs.”

2 Helen Marrone Is From Tennessee, Where Her Father Was the Head Coach at Middle Tennessee State From 1979 to 1998

Helen Marrone is a Tennessee native and comes from a football family. Her father, James “Boots” Donnelly, was the head football coach at Middle Tennessee State from 1979 to 1998. He is a member of the College Football Hall of Fame.

Donnelly talked about his daughter and son-in-law in a blog post on the Buffalo Bills website while Marrone was coaching there. He said he never expected his daughter to marry a football coach.

“She’s been raised in a coach’s family. She knows all of that stuff. She went to Boston College. She is an attorney. She is smart. She is not going to marry a football coach. She’s not going to do that,” he said with a laugh. “Well, that’ll tell you how smart I was. She did. And here we are. I just thought she was smarter than that. She wanted more misery I guess and she’s got it!”

Doug Marrone told Syracuse.com, “My wife knows more about this sport than a lot of people. When you date someone who has been to more conventions than you have – and you’re a football coach – that’s scary.

3. After Graduating From Boston College, Helen Marrone Went to Law School at the University of Memphis & Has Worked as a Prosecutor & Private Attorney

Helen Marrone speaks at an event for Clear Path for Veterans.

Helen Marrone went to law school at the University of Memphis after graduating from Boston College. Since then, she has worked as a prosecutor in the Nashville district attorney’s office and for private law firms.

Doug Marrone told Syracuse.com, “She had left the DA’s office (in Nashville) and went into private practice and at one point, the law firm that she had been working for thought it would be best if I quit coaching so that she could rise up in her work as an attorney. That if she could have stayed there, she could have been a partner.”

Helen and Doug Marrone have two children together, daughters Madeline and Annie, and a son, Mack, according to the Jaguars website.

Doug Marrone said if his wife had stayed in her law firm job, things could have gone differently and he could have been a stay-at-home dad.

“And at the end of the day, we could make more money and I could be a stay-at-home dad. And if that was important to her, I would have done it probably. I really would have. Because she went to school a long time to have a career. And I wanted my career, but she had just as much right to go for her career as I do mine,” Doug told Syracuse.com.

5. She Has Been Involved in Charity Work, Including With Clear Path for Veterans

Helen Marrone has been heavily involved in charity work during her husband’s coaching career, especially with groups focused on helping veterans. They have worked closely with Clear Path for Veterans, a Syracuse-based charity that “provides a necessary platform for active duty, veterans, and military members to find a grassroots, caring community of support and resources,” according to the Bills website.

“Coach Marrone, along with his wife Helen have been with us since the beginning and have continually made time for the veterans and their families who live in our community,” Melissa Spicer, Cofounder and President of Clear Path for Veterans, said in a statement. “Each year, Doug and Helen host an annual Red, White and Blue BBQ that brings together all members of our community and they continually support us throughout the year. While many national organizations bring broader recognition of military support, Doug has quietly worked within his upstate community providing unconditional support and compassion giving depth to the words ‘support our troops.’” 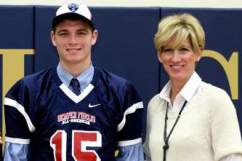