Twitter/KeystoneMarines Jennifer Shurmur, right, with her son Kyle, has been a rock for her family while they ride the NFL's coaching carousel.

It’s been a long and winding road for Jennifer Shrurmur, but the New York native wouldn’t change a thing – even after half a dozen football teams.

Shurmur, the wife of Vikings offensive coordinator Pat Shurmur, is just as competitive as her husband and the support she’s provided for her entire family has been the cornerstone of their success for the last thirty years. Now, with their sights set on the postseason glory and, reportedly, the head coaching job with the Giants, Jennifer and her family are ready for the next step.

Here’s everything you need to know about her:

1. Shurmur Was a Competitive Swimmer at Michigan State

A native of Poughkeepskie, New York, Shurmur has always been an athlete. She first started in dance and acrobatics, but found her place in the pool – particularly after her brother started racing competitively.

Her brother eventually turned his attention to crew, but Shurmur stayed in the pool and found herself swimming at Michigan State where she excelled in a handful of events. In fact, her name is still in the Spartans record books. Jennifer is still in the top-10 all-time for her 200-meter freestyle finish in 1989 as well as the 1,650 freestyle and her 1986 relay team still holds the school record in the 400-freestyle.

It’s hard to believe that the record still exists. We were Big Ten champions in that event, and it was probably one of the most memorable moments of swimming. I just really enjoyed the competition, I enjoyed my teammates, I enjoyed the training that was involved in it. It was the opposite of the academics, so it was just my outlet. It was what I was passionate about.

Although she’s not racing anymore, Shurmur still enjoys her time in the pool and is a frequent spectator when her children, all of whom swam competitively, get in the water.

2. She & Pat Met in the Michigan State Weight Room

Shurmur was a force to be reckoned with in the pool when she and Pat first crossed paths in the athletic department’s weight room. She told the Philadelphia Inquirer their first date was at a local Steak & Ale where “finished his dinner for him.”

It didn’t take long for sparks to fly.

“Yeah, after that date I told my buddies, ‘I’m going to marry that girl,” Pat told the Inquirer. The two dated throughout college before getting engaged in 1988 and Shurmur opted for a career change when she realized Pat was destined for the gridiron sidelines. She’d been pre-med in physiology at Michigan State and planned to attend medical school, but decided, instead, to forego that path in order to be by her husband’s side throughout his career.

3. Shurmur Helped Pat Get Into Coaching 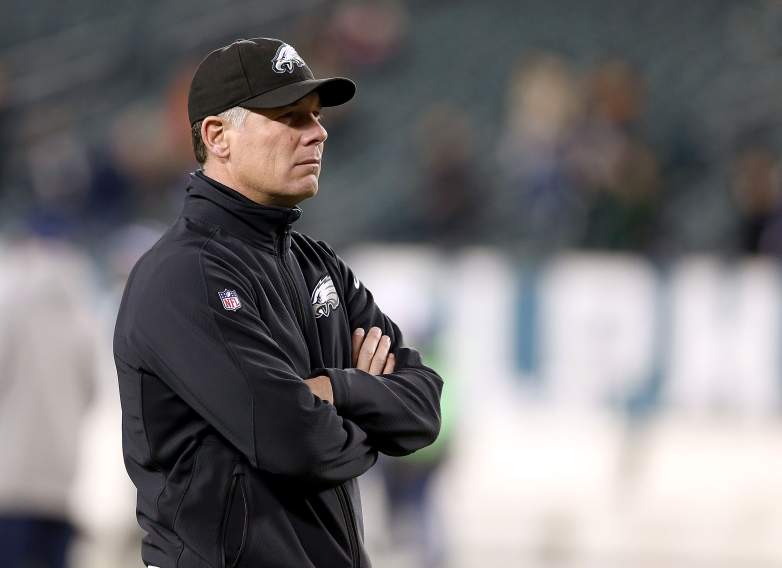 Pat Shurmur didn’t begin his professional career in coaching. In fact, Pat worked as a marketing representative for IBM for nearly nine months after earning his MBA in 1988, but the position never felt right.

The former Spartans standout, who switched from linebacker to center in order to get playing time at Michigan State, wanted to coach and his wife was his most vocal supporter. A few phone calls later and Pat was back at Michigan State as a graduate assistant, again, only this time he wasn’t playing. He was coaching.

“He was doing what he loved,” Shurmur told Cleveland.com, “and it was the best decision he ever made.”

Pat climbed the coaching ladder quickly, coaching tight ends, special teams, and the offensive line at MSU from 1990-97, spending a year with Stanford’s line, and, finally, taking an NFL job in 1999 when he worked as the tight ends coach and the offensive line coach in Philadelphia. He also spent time in St. Louis, Cleveland, another stint with the Eagles and, most recently, as offensive coordinator in Minnesota.

Now, it looks like the Shurmur family is getting back in the New York groove as Pat is, reportedly, set to take the Giants head coaching job.

4. She & Pat Have Four Children 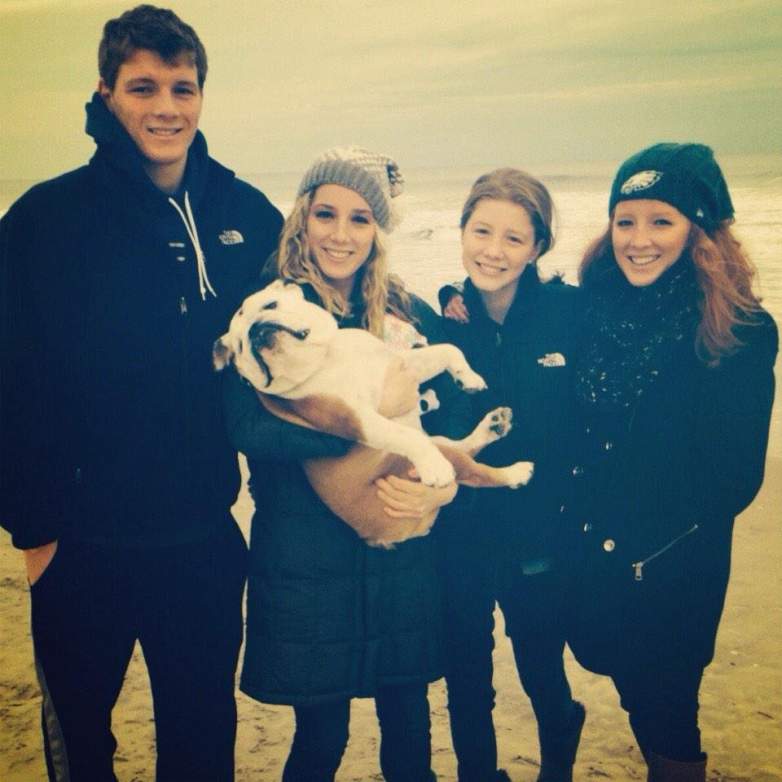 The Shurmurs are parents to four children – Allyson, Erica, Claire, and Kyle. All four kids grew up around football and Shurmur said the family bonded over the game and their slightly nomadic lifestyle. She told Vikings.com:

I’m close with my children because of football, because we’ve moved and we’ve been pioneers together. My children have probably taught me more than I have taught them. I’m a better person because I’m a mom.

The family is a close group and, of course, an athletic one. All four Shurmur children grew up swimming and all three daughters have competed at a high level, notching a few standout moments of their own. Erica followed in her parents footsteps at Michigan State, while Allyson was named to the All-ACC Academic Honor Roll at Boston College, and Claire is currently swimming for the Aquajets Swim Team in Minnesota.

5. Shurmur’s Son, Kyle, is a Quarterback at Vanderbilt 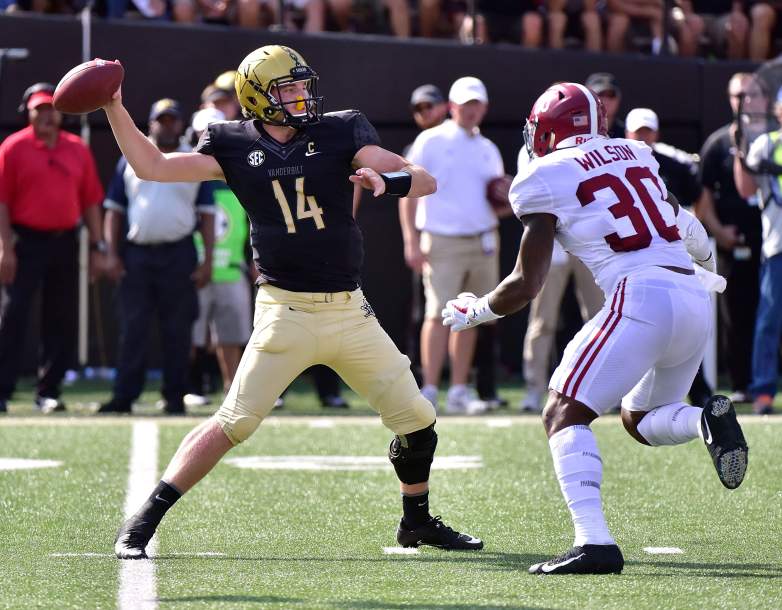 ‌Although he also got his athletic start in the pool, Kyle Shurmur has hit his stride on the football field. The 6-foot-4, 227-pound quarterback just wrapped up his junior season at Vanderbilt, notching one of the best offensive seasons in Commodore history.

Kyle started every game under center, extending his consecutive start streak to 28 games, and finished the regular season completing 220-of-380 passes for 2,823 yards, 26 touchdowns and just 10 interceptions. His touchdown total set the single-season team record, breaking Whit Taylor’s former record of 22 touchdowns set in 1982, while his passing yardage is third overall in a single season.

It isn’t always easy for the Shurmurs to be in the stands for Kyle’s games, but Jennifer is still her son’s biggest fan. “It can be nerve wracking when there are gigantic defensive ends that are trying to sack him, but I know he’s passionate about it, so I support him,” she told Vikings.com. “I have to say that I have a lot more appreciation for players with my son playing at that level.”

Read More
5 Fast Facts, Minnesota Vikings, NFL
The New York native might be getting back to her roots soon as rumors swirl that her husband is set to become the Giants head coach.