Naval Air Station Whidbey Island (NASWI) in Washington state was given the “all clear” around 10:30 a.m. Pacific time, five hours after the sounds of gunfire were reported. The naval base is broken up into two sections, Ault Field and Seaplane Base. For much of the morning, there was a heavy police presence on Ault Field, which is where the gunfire was heard.

Police are still on the scene, however, and there have been regular updates posted on Naval Air Station Whidbey Island’s official Twitter account. The most recent update informed people that Langley Gate has been closed and that those needed to access to base should use the Charles Porter Gate. It is unclear why this change was made.

Naval Air Station Whidbey Island was placed in lockdown around 5 a.m. local time. Although there were rumors of an “active shooter” on the naval base, authorities did not find any evidence to support these reports. Law enforcement worked diligently to search the area and to ensure everyone’s safety. Thankfully, everything has checked out and no injuries have been reported.

When reports of gunfire first surfaced, Naval Air Station Whidbey Island was quick to jump into action. After an initial search — that lasted nearly four hours — law enforcement felt confident that they could partially reopen and lift the shelter-in-place order.

“There was a report of gunfire on Ault Field this morning. Out of an abundance of caution the base was secured. There is limited access and the shelter in place order is lifted. There has been no actual evidence of gunfire. Updates will be provided as they become available,” read an update from Naval Air Station Whidbey Island’s Twitter account.

The photo below shows a line of cars outside of one of the gates at the naval base earlier this morning. People were not allowed on or off the base for several hours.

At 9:30 a.m. local time, the base’s official Twitter account confirmed that Langley Gate had been “reopened for base access.” This update came about an hour after the base confirmed that all gates to Ault Field had been “closed until further notice.”

Langley Gate is now open for base access. All other gates are closed at this time. Please follow all law enforcement traffic controls on Ault Field. We will update as the situation changes.

Naval Air Station Whidbey Island’s Ault Field is located about three miles north of Oak Harbor and 90 miles north of Seattle. The base provides the only naval aviation support in the Pacific Northwest.

According to Military.com, “NAS Whidbey Island is the premier naval aviation installation in the Pacific Northwest and home of all Navy tactical electronic attack squadrons flying the EA-6B Prowler and EA-18G Growler. Adding to the depth and capability of the air station are four P-3 Orion Maritime Patrol squadrons and two Fleet Reconnaissance squadrons flying the EP-3E Aries.”

Over 35,000 people live in this area, including 7,050 military personnel, 14,000 family members, 14,000 retirees, 350+ reservists, and 2,420 civilian contract employees, and 50+ Canadian Forces and their families, according to Military Installments. The site also reports that there is a “no weapons” policy at Ault Field.

“All personnel residing in government quarters are required to register weapons with NAS Whidbey Island. All firearms must be registered with the PPV Housing Office within three (3) days of occupancy or procurement of firearms. Firearms and ammunition must be stored separately in safe, locked locations. Loaded guns in the Premises are prohibited. Displaying or discharging a weapon in the Neighborhood is prohibited. Hand grenades, bombs, and blasting explosives are also prohibited. Registration is done 24/7 at the Langley gate. Unloaded weapons must be brought to the gate with a valid driver’s license and military identification card.” 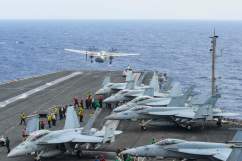 Read More
active shooter, Washington
Follow Heavy ↓
Naval Air Station Whidbey Island in Washington is on lockdown. Reports of an active shooter have been popping up on social media.