Peter Strzok, a counter-intelligence officer in the FBI, has become a flashpoint for Republican criticism of the Robert Mueller investigation into Donald Trump.

Strzok was quietly reassigned from his position in the probe, and it was later revealed that he and another FBI official, Lisa Page, wrote anti-Trump and pro-Hillary Clinton text messages to one another, calling into question his objectivity in the Mueller investigation into Trump’s campaign and Russia.

On July 12, 2018, he was questioned by members of Congress and heatedly denied that his texted opinions about Trump influenced the investigations into the president and Hillary Clinton.

Strzok was also a key player in several stages of the FBI’s investigation into Hillary Clinton’s emails, which led to no criminal charges. He named also appeared in the controversial Republican authored “FISA memo,” which is sometimes called the “Nunes memo.”

One of the texts from Lisa Page to FBI agent Peter Strzok discussed “preparing talking points for then-FBI Director James Comey to give to President Obama, who wanted ‘to know everything we’re doing,'” according to Fox News. “…the message more likely indicated that Obama wanted to be kept informed of an investigation into Russian interference in the 2016 election,” CNN reported, not the Clinton email probe.

The Washington Post reported on June 14, 2018 that the Inspector General’s report reveals Strzok allegedly told Page that Trump’s election would be stopped. You can read the full report here.

“[Trump’s] not ever going to become president, right? Right?!” the lawyer, Lisa Page, wrote to Strzok, according to The Post.

“No. No he won’t. We’ll stop it,” Strzok responded, The Post says the IG report reveals. The text was sent in August 2016 only a few months before the presidential election, and after the FBI had started its investigation into Trump campaign aides, according to The Post.

1. Strzok’s Texts to Lisa Page & His Role in the Clinton & Mueller Investigations Have Caused Controversy

In early December, the Wall Street Journal reported that Strzok had been reassigned from the Robert Mueller investigation in the summer of 2017 after a “government watchdog” began looking into his texts with an FBI lawyer with whom he was having an affair, Lisa Page.

It then emerged that Strzok played a key role in the bureau’s investigation into Hillary Clinton’s email server. CNN reported that Strzok changed former FBI Director James Comey’s “earlier draft language describing Clinton’s actions as ‘grossly negligent’ to ‘extremely careless,'” in Comey’s statement about the FBI’s investigation into Clinton’s emails. Grossly negligent is a phrase with legal significance as that is the standard needed to prove criminality.

However, complicating Strzok’s persona, it was later revealed that Strzok helped write the first James Comey letter that reopened an investigation into Clinton’s emails shortly before the presidential election, which Clinton has argued negatively affected her chances at the polls.

The content of the electronic messages between Strzok and Page has provoked a political firestorm.

“God Hillary should win 100,000,000 – 0,” Strzok wrote to Page, according to one message obtained by Politico. “Also did you hear [Trump] make a comment about the size of his d*ck earlier? This man can not be president,” Page responded, Politico reported. CBS News, which also obtained the emails, wrote that Strzok, on election day, “expressed his dismay at seeing a map showing…Trump winning — he called it ‘f*****g terrifying,’ and a week after the election, Strzok and Page were also alarmed to see that Jeff Sessions was likely to be named attorney general,” with Strzok writing “Sessions for AG” along with an expletive, to which Page replied, “Good god.”

Page and Strzok also wrote disparaging messages about Republican House Speaker Paul Ryan, “with Page expressing the hope that he ‘fails and crashes in a blaze of glory,’” reported CBS.

According to Fox News, more texts were revealed in January 2018. “Page warned Strzok that Clinton ‘might be our next president,’ in a Feb. 25, 2016 message, continuing, “The last thing you need [is] going in there loaded for bear. You think she’s going to remember or care that it was more [DOJ] than [FBI]?”

You can read more of the pair’s texts here:

2. Peter Strzok Graduated From Georgetown University & Is One of the FBI’s Most Experienced Counter Terrorism Officers

Strzok graduated from Georgetown University, a list of donors to the university showed. Strzok earned his master’s degree from the school in 2013, the list indicated. In 2012, Strzok and his wife, also a Georgetown alum, donated between $2,500-4,999 to their alma mater.

Hodgman and Strzok also donated between $250-499 to the Shakespeare Theatre Company, a 2007-08 annual report said. The couple live in the Fairfax, Virginia area and purchased a home for $520,000 in June 2003, according to public real estate records. He is 47-years-old and previously lived in Massachusetts, according to online records.

The Wall Street Journal has called Strzok “one of the FBI’s most experienced counterintelligence agents.”

Peter Strzok is married to Melissa Hodgman. Hodgman started working in the enforcement division at the SEC in 2008 as a staff attorney and was promoted to assistant director in 2012. She investigated numerous cases of fraud and earned a $229,968 salary in 2016, FederalPay.org reported.

“I am honored by this appointment and look forward to continuing our tradition of pursuing tough but fair enforcement actions in complex and cutting-edge cases, especially matters involving cross-border issues and efforts to hold gatekeepers accountable for breaches of their professional standards,” Hodgman said in a news release.

SECMelissa Hodgman works for the SEC.

4. Strzok Served in the U.S. Army & the Nunes’ Memo Describes Him as Biased

Peter Strzok is a former Army officer, according to The New York Times. Little is known about Strzok’s time in the military, however.

The FISA memo authored by Republicans and released on February 2 alleges that the FBI and DOJ relied on the unverified dossier by British spy Chris Steele to obtain a FISA warrant to spy on a Trump campaign adviser, Carter Page. The memo says the FBI and DOJ failed to tell the court that the dossier was funded by the Hillary Clinton campaign and DNC through a firm of former journalists named Fusion GPS.

The Page FISA application also mentioned information regarding “fellow Trump campaign adviser George Papadopoulos, but there is no evidence of any cooperation or conspiracy between Page and Papadopoulos. The Papadopoulos information triggered the opening of an FBI counterintelligence investigation in late July 2016 by FBI agent Pete Strzok,” the memo reads. 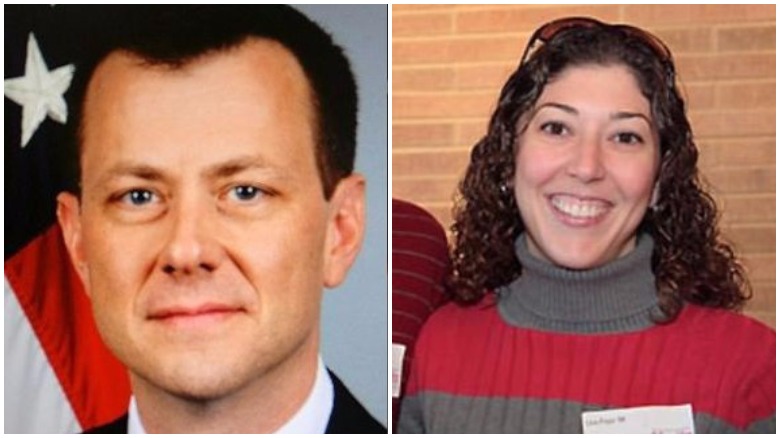 The memo states that Strzok was reassigned by the Special Counsel’s Office to FBI Human Resources for “improper text messages with his mistress, FBI Attorney Lisa Page,” who is not related to Carter Page. The memo states that Page and Strzok “both demonstrated a clear bias against Trump and in favor of Clinton, whom Strzok had also investigated. The Strzok/Lisa Page texts also reflect extensive discussions about the investigation, orchestrating leaks to the media, and include a meeting with Deputy Director McCable to discuss an “insurance” policy against President Trump’s election.

Peter Strzok was quietly reassigned to a supervisory position in the Human Resources Division of the FBI. Since then a firestorm of Republican criticism has centered on the FBI and Department of Justice.

The House Intelligence Committee voted, apparently along partisan lines, in January 2018 to release the four-page memo written by a top Republican that GOP congressmen believe shows bias in those agencies toward Trump, who allowed the memo’s release. Democrats have countered that the memo omits key information and is misleading, and the FBI has expressed grave concerns about its release.