Haley Anderson, a Binghamton University nursing student remembered for her “big heart,” was found dead in a home in the New York community, and an international manhunt is underway to find the person of interest in her death.

Anderson’s body was discovered on Friday, March 8, 2018. The person of interest in the tragic case – a fellow nursing student – is believed to have fled the country. The suspeect has now been identified as Orlando Tercero, 22. Tercero was arrested in Nicaragua at a hospital on March 14, 2018, and he had wounds to his lip and head that police in that country say were self-inflicted.

Many friends posted tributes to Haley on Facebook, remembering her as happy and carefree and bringing light into any room she entered. Her traumatic death has upset many on the New York college campus.

Tercero was later convicted in Anderson’s murder. He received 30 years in prison for “femicide,” which means he killed Anderson because of her gender, according to Spectrum News. The unusual trial, which revealed that Tercero strangled Anderson, took place in Nicaragua.

#BREAKING Orlando Tercero sentenced to 30 years in a Nicaraguan prison for the killing of BU student Haley Anderson. pic.twitter.com/hWWy6dVwv9

1. The Person of Interest Had a Previous Relationship With Anderson, Police Say

Binghamton Police have not released many details of how Haley Anderson was killed, but they say they consider the case a homicide. Haley’s body was discovered by her roommate, allegedly in Tercero’s bed, and Tercero was described as “a male nursing student enrolled at Binghamton University,” according to WBNG-TV. The New York Post reports that the roommate found Haley’s body after tracking her down using an app.

Binghamton police here at 23 Oak Street. Crime scene unit was here earlier today. I spoke to some residents who say college students live there, and they are always friendly. They also say this is an unexpected scene for the neighborhood. pic.twitter.com/edVqjqGfC6

Police said that Tercero and Anderson previously were in a romantic relationship together and the death was not random. The death occurred at a home off campus. However, a friend said that Anderson considered Tercero a friend more than anything but he was obsessed with her. Tercero is accused of telling his sister that he had done “something bad” and was a “disgrace to the family,” according to The New York Post.

“They hooked up in the past, but to her, it was pretty platonic and she didn’t want to have anything seriously,” Mishela Topalli, Anderson’s roomate, told Time Magazine.

According to WBNG, police said investigators determined the person of interest left the United States by plane before Anderson’s body was found. Authorities have now revealed they believe Tercero fled to Nicaragua. He is a U.S. citizen born in Florida, and authorities say they will now move to extradite him from Nicaragua back to the United States.

People filled the university’s Facebook page with angry comments about the person of interest. According to WBNG-TV, “police responded to a minor incident involving the two (Tercero and Anderson) last fall, where Tercero had damaged Anderson’s property, but Anderson did not file charges.” 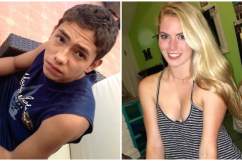 2. Anderson Was a Nursing Student Who Worked in a University Cafe

Haley Anderson had a bright future, according to those who knew her. She was a nursing student at the Binghamton university, according to WICZ-TV. The television station reported that Anderson was a senior who would have graduated in May.

Anderson had a job on campus, working at Jazzman’s Cafe, the station reported. Anderson’s Facebook page says she was from Westbury, New York. Binghamton has a student body of more than 13,000 undergraduates. It’s located in central New York not far from Ithaca.

3. Anderson Stayed on Campus to Study & Her Roommates Say Tercero Was Allegedly Obsessed With Her

Haley’s roommates have alleged that Tercero seemed obsessed with Anderson. Josephine Artin, her roommate, told The New York Post that Tercero, Anderson and her boyfriend were in a “love triangle” and Tercero was “obsessive and crazy” and jealous of the boyfriend.

Friends asay Anderson decided not to go home for spring break because she wanted to study. Police found Anderson’s body after receiving a call to check her welfare on that Friday afternoon.

“Rest In Peace, Haley. You would’ve been a great nurse,” wrote a woman on Facebook in tribute to the slain woman. “This incident and the circumstances of the death was not a random act or involving the conduct of a stranger,” police said in a news release.

Police have launched an international manhunt to find the person of interest.

Athena Anadnostakos, a co-worker, told FOX40, “She was a very good girl. She was friendly, joked around, we had a good time together.”

4. Anderson Was Remembered for Her ‘Infectious’ & ‘Child-Like Spirit’

A funeral fund for Anderson on GoFundMe had raised more than $9,000 with three days of her death.

“As many of you may already know or have heard on the news this past Friday, March 9th, we lost one of the most amazing people many of us have had the pleasure of knowing,” a friend wrote on the page. “Anyone who knew Haley Anderson knew how her energy lit up every room she walked into, whether it was our lives as her friends or the lives of her patients when she volunteered as a nursing student. Haley’s laughter was infectious and her child-like spirit touched all the people around her.”

The page continued, “At just 22 years old, Haley’s life was tragically taken. Due to the unexpected nature of these events Haley’s family is not financially prepared for the costs of a funeral. Much like there are no words to describe the magnificent person we lost, there is no way to describe the way her family feels. She left behind a mother, a father, a younger sister, and a community that is still struggling to cope with her loss. If you can find it in your heart to help her family in this time of great sadness, any donations will be greatly appreciated and go directly to covering the cost of her funeral expenses.”

The statement on the page demonstrates how many people were affected by Anderson and her death. “There is nothing any of us can do now that can make this situation better or any easier to bear, but all we can do is love and remember Haley for the genuine and amazing person that she was,” it reads.

5. Friends Remembered Anderson in Tributes as Someone Who Was a ‘Positive Girl With Such a Bright Future’

People who knew Anderson in both high school and college expressed shock to hear about her death. Wrote one woman on Facebook, “Taken way too soon. Although we haven’t spoken in some time, Haley and I were friends & teammates throughout high school. What happened to her is nothing short of tragic and unfair. She will be greatly missed but will always be in our hearts. Rest easy, beautiful ❤️”

A man who knew Anderson wrote, “I had the pleasure of working with Haley Anderson for a year or so and she was such a positive girl with such a bright future. The scumbag that did this deserves to be caught and put away for life, if not worse. I’m so tired of young people being taken away from us, especially these amazing people who brightened not only the people they touched but the world they lived in. Beyond chipotle I knew her through her Snapchat and I have to say that I laughed quite often going through her story. Rest easy now Haley, you brought light to all the people who had the pleasure of knowing you and they’re loved are better for having known you. My condolences go out to her friends and family. RIP.”

Another friend wrote, “My heart is broken and I have no words. I never met anyone who knew, at such a young age, what they wanted in life, went out, and achieved those goals. Your smile was contagious and your hugs always so full, Haley Anderson. Rest peacefully and I hope and pray that justice is served for you and your family. ❤️”

Another friend also wrote a lengthy tribute to Anderson, writing, “Some of my happiest memories at Binghamton and during breaks was spending time with you. Whenever I saw you , you would be so happy and carefree. When we weren’t in school, we would hangout all the time whether it was at your house or randomly when you were in Albany. Whether it was spending time with you at the Rat, on our dorm floor with all our friends, playing with your cat as I made fun of your Friends posters, the memories I have with you are endless. Even though you caused my room door (two in two separate houses) to break, I truly love you and I am so proud to have had a best friend like you in my life. I will always cherish the memories we have together. Rest easy Haley Anderson ❤️.”

Loading more stories
wpDiscuz
0
0
Would love your thoughts, please comment.x
()
x
| Reply
Haley Anderson, a nursing student at Binghamton University in New York, was killed, and an international manhunt is underway for the person of interest.