Alek Minassian, the Toronto van ramming attack suspect, does not appear to be linked to ISIS or any other organized terror group, at least according to preliminary accounts. Authorities have said, however, that they are not yet certain of the motive for the attack, which killed 10 people and injured 15.

Toronto Police Chief Mark Saunders was asked whether the attack was linked to international terrorism and responded, “Based on what we have there’s nothing that has it to compromise the national security at this time,” CBS News reported. Police have said they don’t believe that Minassian is tied to an organized terror group, which would include the Islamic State. However, police also said they are not ruling out anything at this point until the investigation is complete.

Rita Katz, director of SITE Intelligence Group, which monitors terrorist activity, including that of ISIS, wrote on Twitter after the Toronto attack, “As of now, #ISIS channels are not promoting the #Toronto vehicular attack, which contains staples of ISIS-inspired events. Though Alek Minassian wasn’t killed, #ISIS may still issue statement if news of links/allegiance arises (like case of Manhattan attacker Sayfullo Saipov).”

As of now, #ISIS channels are not promoting the #Toronto vehicular attack, which contains staples of ISIS-inspired events. Though Alek Minassian wasn’t killed, #ISIS may still issue statement if news of links/allegiance arises (like case of Manhattan attacker Sayfullo Saipov) pic.twitter.com/aAkqL3r9Nb

Saipov, an immigrant from Uzbekistan, became radicalized after watching ISIS videos on the Internet. He was accused of terrorism charges by federal authorities in the United States after he allegedly rammed a van into bicyclists in Manhattan, and he also asked to hang an ISIS flag in his hospital room. ISIS accounts on social media celebrated the massacre in Nice, France and in other vehicular attacks.

The method of attack certainly seems similar in Toronto, however other possible motives have surfaced.

Rather than foreign terror, CBC reported “one possible explanation has emerged online that suggests Minassian was angry over being rebuffed by women.” A Facebook post that bears Minassian’s name and photo referred to “Supreme Gentleman Elliot Rodger,” a mass murderer in Isla Vista, California who “raged about a number of women turning down his advances, rendering him an ‘incel,’ or involuntarily celibate,” CBC reported. You can read more about the bizarre Incel Movement that might have motivated the attack here. The post has not been definitively verified, however.

GettyForensic police officers look a car bumper after a truck drove up on the curb and hit several pedestrians in Toronto, Ontario.

Canadian authorities don’t seem to be in foreign terrorism posture so far, although, obviously, further revelations could always change that.

“Authorities had not turned over the investigation to the Royal Canadian Mounted Police, a sign that investigators believed it unlikely terrorism was the motive,” CBS News reported. Minassian was previously known to Toronto authorities, CNN reported.

Some observers were not willing to discount an ISIS tie solely because the attack method was so similar to those used by ISIS adherents in the past.

#CBCSpin Predictably, the CBC tries to spin the theory that the Toronto terrorist was mentally ill/mad at being jilted by a woman, but his MO is all ISIS. ISIS specifically urged its followers to kill infidels by running them over with trucks/cars, and/or by stabbing them.

However, authorities have said the attack appeared deliberate.

The horrific van ramming attack along a busy Toronto street in the middle of the afternoon on April 23, 2018 followed an all-too-familiar modus operandi; attackers have used vans to mow down pedestrians in European cities, such as in Nice, France; Barcelona, Spain; and London, England, to name a few.

In some of the European van ramming incidents, and in the vehicle ramming along a New York City bicycle path, the Islamic State claimed credit. ISIS, through its Amaq news agency, most recently claimed responsibility for an April 22, 2018 blast at a voter registration center in Afghanistan that killed at least 57 people.

GettyThe scene of the tragedy in Toronto.

According to UK Daily Mail, “Just two months ago, ISIS urged fanatics to carry out vehicle attacks in a chilling poster showing a picture of blood on the front of a lorry. The terror group called on would-be lone-wolf jihadists to ‘hit them with a truck’ and to ‘kill them all’ in the propaganda material.”

Alek Minassian is from the Richmond Hill neighborhood of Toronto and is a student at Seneca College. 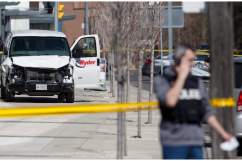