Jennifer Hart, the adopted mother of six children who was driving an SUV when it plunged over a cliff in California, was seen on surveillance video in Fort Bragg on Sunday morning, March 25. The deadly crash happened sometime between Sunday night, March 25 and Monday afternoon, March 26. The surveillance video is grainy, but authorities believe that it likely shows Jen Hart, KRON4 reported. The sighting, along with additional new evidence, give officials a better idea of where the Hart family was before Jennifer and Sarah Hart and three of their six children were killed. Investigators found three of their six children dead at the scene, thrown from the car: Markis Hart, 19; Jeremiah Hart , 14; and Abigail Hart, 14. Officials are conducting a search for the other three children: Sierra Hart; 12, Hannah Hart, 16; and Devonte Hart, 15.

The surveillance footage was taken on Sunday, March 25 at 8:05 a.m. at a Safeway in Fort Bragg. Jen Hart appeared to be alone. Investigators released a photo from the surveillance video:

The surveillance video provides more clues about the family’s journey and what might have happened before the horrific crash. Here is the timeline that we know so far. This timeline includes major events in the family’s life, and then events that happened during the days leading up to the crash.

2007: The Harts adopted Devonte and two of his siblings, after previously adopting their other three children.

December 27, 2010: The Hart’s daughter, Abigail, tells her teacher she has been abused, while they were living in Minnesota. She says it was Jennifer, but Sarah pleads guilt in early 2011. Sarah follows the terms of her probation, avoiding 90 days in jail.

2013: The West Linn police department was contacted with concerns about the Harts, and the concerns were forwarded to DHS, KRON4 reported. But DHS would not confirm or deny this report.

2014: Devonte Hart is photographed at a rally in Portland.

March 2016: The family is photographed standing behind Bernie Sanders during one of his campaign stops in Vancouver.

2017: The Harts moved to their current home in Woodland, Washington.

May 2017: One of the Harts’ daughters stopped by neighbors Bruce and Dana DeKalb’s home at 1:30 a.m., saying she needed protection from abuse.

Sometime between March 18-23, 2018: A few days before the crash, neighbors Bruce and Dana DeKalb called CPS about the family, concerned the children weren’t being fed because Devonte often stopped by seeking food.

Friday, March 23: CPS makes its first visit to the Harts’ home. They don’t answer the door and were later seen leaving. Multiple checks were attempted, but it’s unclear exactly how many and on what dates.

Saturday around 8:15 a.m., March 24: The Harts were somewhere in the Newport, Oregon area, California Highway Patrol and the Mendocino County Sheriff’s office reported. Newport, Oregon is about 2 1/2 hours south or 160 miles south of Woodland, Washington, where the family lived. Here’s a map of the distance between Woodland, where the Harts lived, and Newport. Note that this map does not show their exact itinerary, but it gives you an idea of how far they traveled:

Saturday, March 24: The family traveled south on US-101 from Newport, and got onto Highway 1 in Legget, California.

Saturday around 8 p.m., March 24: The family stayed on Highway 1 until they got to Fort Bragg on Saturday night. It is approximately 43 miles south from Legget to Fort Bragg. But from Newport, Oregon to Fort Bragg is approximately a nine hour drive or about 450 miles. Did the family have a specific destination in mind? Here’s a map of the distance between the cities. Note that this map does not show their exact itinerary, but it gives you an idea of how far they traveled:

Sunday at 8:05 a.m., March 25: Jen Hart was possibly seen on surveillance at a Safeway in Fort Bragg. (Officials said they are investigating whether the woman in the grainy photo is Jennifer.)

Sunday around 9 p.m., March 25: The family left Fort Bragg. Fort Bragg is about 20 miles from where the crash happened.

Monday, March 26: Clark County attempts another welfare check, but no one was home.

Thursday, March 29: Police obtained a search warrant for the Harts’ home. They said there was no suicide note or anything obvious to explain what happened.

Authorities still believe all six children were in the SUV, New York Daily News reported. But because of the family’s travel and the three children who are still missing, they are still searching. Mendocino County Sheriff Lt. Shannon Barney told the Daily News: “Right now, we have to leave open the possibility they could be in Washington or Oregon or elsewhere in California. There is always that possibility, and we have to leave it open.”

Read more details about Jennifer and Sarah Hart and what happened in Heavy’s story below: 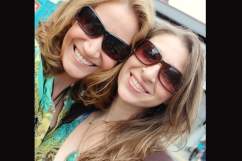 Read More
Breaking News, California, Washington
Jennifer Hart was seen on a surveillance camera before her car drove over a cliff, killing her and her family. See a timeline and map of the sightings.