Getty US actress and fiancee of Britain's Prince Harry Meghan Markle attensd a reception with delegates from the Commonwealth Youth Forum in central London on April 18, 2018, on the sidelines of the Commonwealth Heads of Government meeting.

Meghan Markle, a feminist? That’s the word the Royal Family quotes Meghan as using to describe herself on its new website biography page for her.

The page was added after Markle married Prince Harry, the sixth in line to the British throne, on May 19, 2018 at St. George’s Chapel. The star-studded wedding – in which senior Royals mixed with Hollywood stars – also saw Meghan jettison the word “obey” from her vows (as Kate Middleton and Diana Spencer did before her.) The website says the new Duchess of Sussex will undertake duties on behalf of the Queen. Meghan also walked by herself down the aisle during the first part of the ceremony (eventually being met by Prince Charles), which some perceived as a feminist statement.

The news website biography on the Royal Family page cuts right to chase when describing how Meghan sees herself. It contains this quote from her:

I am proud to be a woman and a feminist.

The website focuses almost entirely on Meghan’s charitable efforts throughout her life, making scant mention of her career as a television actress and spokesmodel.

“From a young age, The Duchess had a keen awareness of social issues and actively participated in charitable work. Aged 11 she successfully campaigned for a company to alter their television advert that had used sexist language to sell washing-up liquid,” the Royal Family website says.

“Her Royal Highness also volunteered at a soup kitchen in Skid Row, Los Angeles from the age of 13-17. She continued to volunteer at the soup kitchen when she would return home to Los Angeles until the age of 22.” The only reference to her television works focuses on her interest in helping homeless people.

“While filming in Toronto, The Duchess actively volunteered at a Canadian soup kitchen from 2011-2013. She also established the program at her place of work to ensure that leftover meals from the set were donated to local homeless shelters,” it reads.

Adds the site, “These early experiences helped to shape her lifelong commitment to causes such as social justice and women’s empowerment.”

The Organization One Young World

GettyMeghan Markle smiles as she speaks with delegates from the Commonwealth Youth Forum at the Queen Elizabeth II Conference Centre, during the Commonwealth Heads of Government Meeting on April 18, 2018 in London, United Kingdom.

“One Young World is a global forum that gathers together young leaders in order to develop solutions to some of the world’s most pressing issues. She attended panels for One Young World in Dublin, Ireland and Ottawa, Canada.”

Meghan was also involved in this organization during her adult years and visited a refugee camp.

“In 2015, The Duchess became the UN Women’s Advocate for Women’s Political Participation and Leadership. In this role, she gave a speech on the importance of gender equality on International Women’s Day for UN Women in New York City,” says the website.

“Ahead of her appointment to this role, Her Royal Highness spent time at the UN’s New York office to understand the organisation’s day-to-day work before embarking on a learning mission to Rwanda. On this trip The Duchess met female parliamentarian leaders in Kigali and visited Gihembe refugee camp, where women were working on leadership and empowerment at a grassroots level.”

In a section titled “world vision,” the website discusses the Duchess’ prior work in Rwanda and India on clean water issues.

“In addition to her role with UN Women and One Young World, Her Royal Highness became a Global Ambassador for World Vision in 2016. As part of her work with the charity The Duchess visited Rwanda on a clean water campaign that would work to allow young children to continue their education,” says the website.

“In 2017, Her Royal Highness undertook a second learning mission with the organisation when she visited India with World Vision to bring a greater awareness to girls’ lack of access to education. In the slum communities of Mumbai, The Duchess witnessed the work of the Myna Mahila Foundation who empower women through access to menstrual hygiene products and employment opportunities.”

The website links to an article that Meghan wrote in Time Magazine on these topics. It’s called “How Periods Affect Potential.” She wrote, in part, “From sub-Saharan Africa to India, Iran, and several other countries, the stigma surrounding menstruation and lack of access to proper sanitation directly inhibit young women from pursuing an education.” The article is from March 2017. 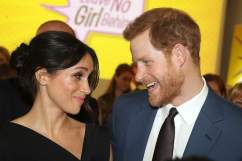