Meghan Markle paid tribute to Princess Diana at the Royal Wedding’s evening reception when she paired Princess Diana’s aquamarine ring with a white halter-style gown. The flash of “something blue” on Meghan’s hand was clearly visible as she waved to photographers while riding in a silver-blue Jaguar with Harry at the wheel.

This was not the only tribute to Diana on the day of the wedding. Harry picked Diana’s favorite flowers from her garden to incorporate them in Meghan’s bouquet. “Prince Harry handpicked several flowers yesterday from their private garden at Kensington Palace to add to the bespoke bridal bouquet designed by florist Philippa Craddock,” Kensington Palace revealed.

“The spring blooms include Forget-Me-Nots which were Diana, Princess of Wales’ favourite flower. The couple specifically chose them to be included in Ms. Markle’s bouquet to honour the memory of the late Princess on this special day.” In addition, the couple honored Diana’s memory through a musical selection at the wedding. Before Guide Me, O Thou Great Redeemer was chosen for the wedding of Prince Harry and Meghan Markle, the hymn was a selection during the funeral of Diana, Princess of Wales.

In addition to the ring, Meghan wore Aquazzura shoes with baby blue soles to the reception.

But it was the ring that arguably drew the most attention. What’s the history of Princess Diana’s aquamarine ring?

The new aquamarine ring #MeghanMarkle wore tonight isn't actually new at all – it belonged to Princess Diana. We assume it was a gift from Prince Harry. Great spot, @saadsalman719 pic.twitter.com/Hr1mrbwN3g

The aquamarine ring is described as being an emerald-cut ring.

Diana Left Her Jewelry to Her Sons, Including the Blue Ring

A Kensington Palace spokesperson confirmed to @BuzzFeedNews that Meghan is wearing an aquamarine ring that belonged to the late Princess Diana: pic.twitter.com/mmwgKrXKcj

Princess Diana would probably have been very pleased to see Meghan wear her ring because she specified in her will that she wanted her sons’ future wives to have access to her jewelry.

“I would like you to allocate all my jewellery to the share to be held by my sons, so that their wives may, in due course, have it or use it,” a letter the Princess wrote said, according to Hello. Kensington Palace confirmed that the ring Meghan was wearing to the evening reception was the one that belonged to the late princess.

The new aquamarine ring #MeghanMarkle wore tonight isn't actually new at all – it belonged to Princess Diana. We assume it was a gift from Prince Harry. Great spot, @saadsalman719 pic.twitter.com/Hr1mrbwN3g

Some might remember that Diana wore the blue ring with a matching bracelet, although Meghan only chose to don the ring. “The jewel is part of a set — the other piece is an aquamarine bracelet, where it’s connected by five strands of pearls,” People Magazine reported.

Has The Crown revealed the TRUTH behind Kate Middleton and Diana's engagement ring? https://t.co/PA1rXuE7Iq pic.twitter.com/NpKOLPHU2J

Many remember Princess Diana’s iconic oval sapphire blue engagement ring. That ring was gifted to, and worn by, Kate Middleton, now Prince William’s wife and the Duchess of Cambridge. 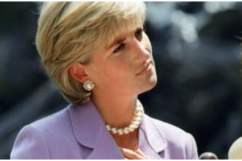