Eric Hartley is the former Capital Gazette journalist who was sued after writing an article about Jarrod Ramos in 2011. On June 28, 2018, Ramos was accused of going into the Gazette newsroom and shooting dead five people while injuring several more.

The Capital Gazette reported in September 2015 that Maryland’s second highest court had upheld a ruling in their favor against Ramos. Ramos was accusing the newspaper of defamation following a 2011 article by Hartley about Ramos. The piece made reference to Ramos’ criminal record, a guilty plea to an harassment charge.

The claim was first made by Ramos in July 2012 and was first dismissed shortly afterward because the suspect didn’t include supporting evidence. The case was dismissed again in October 2012 when Ramos sued again. You can read the full case documents here via the Washington Post. Prince George’s Circuit Court Judge Maureen M. Lamasney first dismissed the claim saying that the piece was “based on public records and Ramos presented no evidence it was inaccurate.” During the case, Ramos represented himself, according to the Gazette. The original article was titled, “Jarrod Ramos wants to be your friend.”

According to Eric Hartley’s Twitter account, he is now working for the Virginian-Pilot in Norfolk. The Pilot wrote, the day after the Capital Gazette shooting, “Annapolis newspaper shooting suspect harassed Virginian-Pilot editor for years.” The article details the content of Hartley’s original article which said that Ramos had pleaded guilty to misdemeanor harassment. Ramos was accused of trying to befriend a woman he went to high school with on Facebook. Ramos said that he wanted to thank her for being nice to him in high school. Hartley wrote, via the Pilot, “That sparked months of emails in which Ramos alternately asked for help, called her vulgar names and told her to kill herself.. He emailed her company tried to get her fired.”

Hartley wrote that Ramos’ actions led the woman to “live in fear for her safety for months.” The woman was fired from her banking job, something she attributed to Ramos’ actions. The woman filed charges against Ramos in 2011. Thomas Marquardt, the then-editor of the Capital Gazette, told the Pilot, “I felt personally threatened by [Ramos]. I was worried about my well-being, my wife’s well-being, and the staff’s. We were all concerned at the time… [The Police] didn’t think there was a case.” Hartley’s article identified Ramos as working for the U.S. Bureau of Labor Statistics having graduated from college with a degree in computer engineering.

2. Jarrod Ramos Said That Hartley Was Going to ‘Journalist Hell’

On his Twitter page, Ramos went by the moniker, “@EricHartleyFrnd.” Hartley regularly featured as a topic on Ramos’ profile. In December 2015, Ramos tweeted that Hartley was going to “Journalist Hell.” In June 2015, Ramos said that Hartley was “scared s***less.” In February 2015, Ramos posted this photo to Twitter, comparing Hartley to Star Wars villain Jabba the Hutt.

The same month as the Jabba the Hutt photo, Ramos wrote that Hartley was a “veteran bad journalist and proudly irresponsible, like @Charlie_Hebdo.” On January 7, 2015, Islamist gunmen stormed the offices of French satire magazine Charlie Hebdo and killed 12 people. Ramos made another reference to the shooting on January 10. In October 2014, Ramos tweeted that Hartley had “no ethics.”

When Hartley moved to California to take a job with the OC Weekly, Ramos tweeted, “Yes, Eric Thomas Hartley, you moved to… oh just go ahead and kill yourself already before I do (legally in court).” One Ramos’ first tweets referencing Hartley goes back to October 2012 when he wrote, “Eric Hartley admitted he is not a “good reporter.” He is bad. Sometimes the best defense is to send an opposing offense to Journalist Hell.”

3. Hartley Says He Is, ‘Curious, Skeptical of Authority & a Little Annoying

In a section of the Pilot’s website titled, “Why I am a Journalist,” Hartley writes, “If you’ve ever spent time around kids, you know how annoying it can be when they won’t stop asking, “But why?” That question is a big part of my job, and it suits my personality: curious, skeptical of authority, perhaps a little annoying. A functioning society needs people to ask why – and to tell you the answers we find.”

In 2015, Hartley won a courage in journalism award in Las Vegas for his coverage of billionaire casino owner Sheldon Adelson. The Las Vegas Review Journal reports that Hartley left the newspaper before the story came to full fruition.

On his Facebook page, Hartley says he is the Norfolk/Portsmouth editor of the Pilot.

4. An NBC Editor Said the U.S. ‘Could Use’ More Journalists Like Eric Hartley

As news of Hartley’s connection to Jarrod Ramos spread, Asher Klein, a digital news editor with NBC tweeted, “He’s about to be a part of the news cycle because the Annapolis newsroom shooter is apparently obsessed with him, so let me just say for the record that Eric Hartley is one of the best journalists I’ve ever had the pleasure to know and this country could use many more like him.” The San Diego Business Journal’s Sarah de Crescenzo commented on the tweet saying, “Ditto. Top notch.” The Tennessean’s Mike Reicher wrote, “I saw Eric’s photo on the suspect’s Twitter page! What the hell?”

5. Hartley Was Laid Off From the OC Register After Just 6 Months on the Job

In September 2014, the OC Weekly reported that there were massive layoffs at the OC Register, were Hartley had just begun working as a courts reporter. Hartley told the OC Weekly, ” Not even six months on the job if I’m remembering correctly. Was proving to be a good one–and now, nothing.” 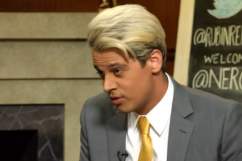 Milo Yiannopoulos Said ‘Reporters Should Be Gunned Down’

Loading more stories
wpDiscuz
0
0
Would love your thoughts, please comment.x
()
x
| Reply
Eric Hartley is the former Capital Gazette journalist who was sued after writing an article about Jarrod Ramos in 2011.