Jeremy John Webster was identified by Westminster police as the suspect accused of shooting four people in cold blood – including two children – in the parking lot outside a Westminster, Colorado dental office. Road rage is believed to be the motive for the mass shooting, which left a teenage boy dead, according to police.

Police say that the suspect did not know any of the victims. “Through our investigation we have been able to determine the suspect did not know any of the victims and did not have a relationship with any of them. It appears as if this incident stemmed from a road rage,” police wrote. Three of the victims were a mother, Meghan Bigelow, and her two juvenile sons, whom the suspect is accused of shooting multiple times after an argument on the roadway ignited between Webster and the 41-year-old mother. It’s alleged that Webster following the family into the dental office parking lot. He’s then accused of shooting a man, John Gale, who was just sitting in another vehicle with his 9-year-old daughter. That girl was not injured. Vaughn Bigelow, 13, died in the mass shooting.

The shooting, which unfolded in the afternoon hours of June 14, 2018, was the latest mass shooting to traumatize the United States. The first reports broke out of an active shooter near a dental office, and the suspect was still at large for several hours. The shooting occurred in the parking lot outside Comfort Dental at 80th and Sheridan. Jeremy John Webster, who is 23 and from Colorado Springs, was first identified as the suspect by CBS Denver on the morning of June 15, 2018.

The suspect was arrested after a wildlife officer noticed his car. “From Colorado State Patrol – man is in custody in connection with shooting of 4 people in Westminster. A wildlife officer followed his car south on I-25 and he was eventually stopped near Castle Rock and taken into custody,” tweeted CBS4 reporter Brian Maas.

1. Jeremy Webster Has a Licence to Work in the Marijuana Industry & the Mother Allegedly Snapped a Photo of His License Plate After the Argument Ensued

A lot of police focus on the silver SUV — does appear there are some gunshots on the outside of the SUV on the scene of a shooting outside a Westminster CO dentist office: https://t.co/p7HtB00TqZ pic.twitter.com/V1PCptnTig

Although it’s now believed that road rage motivated the shootings, Webster, who is from the east coast originally, “holds an active license from the Colorado Department of Revenue allowing him to work in the marijuana industry,” CBS Local reported. However, the television station reported that it’s not clear whether he actually works in that industry, and he has no criminal history in Colorado. There is no indication that the license bore any relevancy to the shooting; it’s simply a biographical detail. Heavy has confirmed the license through Colorado records you can see here.

Online records reviewed by Heavy show Jeremy Webster had addresses in New Jersey until showing up in Colorado in 2014.

We don’t know if Jeremy Webster purchased his Glock 19 legally but @WestminsterPD points out he’s not required to have concealed carry permit for a gun in his car. #kdvr

KDVR-TV reporter Rob Low wrote on Twitter that “Jeremy Webster passed a background check two years ago to get his marijuana license to be able to work in the industry. License due to expire in two weeks.”
Contact7 investigator Jace Larson obtained a search warrant in the case that provided more details. It says that Webster allegedly used a Glock 19 handgun to commit the shooting and that one of the boys, Cooper, gave police an account of what happened. You can read the search warrant document here.

According to the search warrant, multiple witnesses saw Webster park his black Toyota Corolla in the middle of the parking lot behind Meghan Bigelow’s vehicle. “Jeremy and Meghan were involved in a brief argument as she and her three children, Asa Bigelow, Vaughn Bigelow and Cooper Bigelow, age 12 exited her car,” the warrant says.

As Meghan and Jeremy were arguing, witnesses “saw Jeremy produce a handgun and shoot Meghan multiple times,” the warrant alleges. “When Meghan was shot she fell to the ground and Jeremy then turned to Vaughn Bigelow and Asa Bigelow and shot both of those children multiple times. Jeremy was seen briefly walking back toward his car and he then walked up to Vaughn Bigelow and shot him again while he was on the ground. The third child, Cooper Bigelow was able to flee the scene and was not shot,” alleges the warrant.

Meghan Bigelow with her husband.

After Jeremy allegedly shot Meghan and two of her children, Jeremy appeared to make eye contact with John Gale, who was sitting in his truck in the parking lot with his 9-year-old daughter, says the warrant. Jeremy is accused of walking toward John’s truck and firing multiple rounds, striking Gale in the arms. John “put his truck into reverse sped out of the parking lot,” according to the warrant.

After allegedly shooting John, Jeremy Webster fled the scene, police say, although he was apprehended a few hours later after his vehicle was spotted by a wildlife officer. Cooper Bigelow said the incident started in the area of Sheridan Boulevard at Turnpike Drive. “Meghan and Jeremy were involved in some type of road rage incident and Jeremy followed their vehicle” to the dental parking lot, where they were involved in a brief argument, the warrant says.

The child fled into the business and saw Jeremy shoot his mother and two brothers, contends the warrant.

Westminster police released the name of the suspect in a press release.

The person of interest was just handcuffed and taken into a Westminster police car. We are not showing a photo of him at this point to respect @WestminsterPD wishes. #9News pic.twitter.com/uvjVYBeZ1Z

Police said they were notified of the shooting in the afternoon hours of June 14, 2018. It occurred in the parking lot of a business at 80th Avenue and Sheridan Boulevard. “Shooting occurred at 3:05 in parking lot of business at 80/Sheridan. Ofc discovered 4 GSW vics when they arrived on scene. All victims transported to area hospitals. No update on their conditions,” Westminster police wrote when the incident first broke.

The police also noted, “We are investigating a disturbance with weapons in a business parking lot at 104th Ave and Federal Blvd.” Photos showed police were focusing their investigation on a silver SUV at the scene. 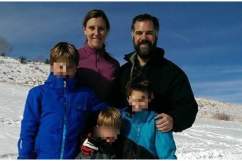 2. There Were Reportedly 20 Witnesses & Jeremy Webster Is an Unaffiliated Voter

Police indicated at first that they are not sure what the motive is for the crime before revealing they think that road rage drove the mayhem. They have not provided additional details.

“We believe we have the person responsible for this incident in custody and there is not a danger to the public,” they reported in a press release on the evening of June 14, 2018.

“Due to the ongoing nature of this investigation and the need to complete photo lines ups with several witnesses, we are not releasing the identity of the adult male at this time. We will release his information as soon as we complete the initial part of this investigation. We anticipate being able to release the identity of the suspect sometime tomorrow. At this time we do not have a motive for this crime.” Police eventually released Webster’s name and mugshot, however.

Meghan Bigelow with one of her children.

The scene “at 80th Avenue and Sheridan Boulevard is clear and all roadways have been re-opened,” Westminster police said.

Police released a description of the suspect vehicle early on, writing on Twitter, “Vehicle of Interest: Black Toyota 4 door” with a Colorado license plate of Co lic NPQ 091. Police added that “occupant(s) should be considered armed. Call 911 or WPD with info 303 658 4360.” DenverChannel.com says police had the plate number fast because the boy who was unharmed (there were three children present during the shooting and only two shot) was able to tell police about the photo his mother took of it.

The Denver Post reported that 20 people witnessed the shooting, and it’s not clear whether it was targeted or random. A witness told The Post that he “found a man suffering from multiple gunshot wounds and his clothes saturated in blood,” saying, “He was very coherent. He was very calm.”

3. One of the Victims Who Died Was a Teenage Boy & Two Others Are Fighting for Their Lives

Meghan Bigelow with her family

According to DenverChannel.com, the boy who died was 13, and the injured boy is 8-years-old. “When officers arrived on scene, they found two adults and two children, suffering from gunshot wounds,” police said in the news release. “All four victims were shot in the parking lot of the business complex. There were no additional victims in any of the businesses.”

Police added, “The adult female and juvenile male are still in critical condition as of this morning.” The Denver Post is still reporting that three of the victims were wounded and only the child died. 9News reported that police believe the adult man who was shot will also survive.

Meghan Bigelow with her husband

Heartbreaking scenes occurred outside the dental office where the child was killed.

Just saw a scene that brought me to tears. Brandy Navarette lives near the shooting. His 6-y/o granddaughter Lilly Diaz wanted to bring flowers for the little boy that died, she said. They brought flowers, a rosary & prayed in the parking lot. She asked me why he had to die. pic.twitter.com/glE2VoFSIt

The adult male who was shot was not related to the other three victims, Westminster police had previously confirmed.

The parking lot is quiet this morning. Where officers, evidence markers and police investigators swarmed yesterday now sits a baby bunny with a whimsical castle tower holding a sign for Children's Dentistry a few feet away. pic.twitter.com/PMYBaf9Jf1

“An adult male who was shot is expected to survive his injuries. There is no relation between this victim and the below listed victims,” the police said. “An adult female and her two male children were also struck by gunfire. The female and one of the children sustained life threatening injuries and are in critical condition. A juvenile male succumbed to his injuries.”

Big police presence outside Comfort Dental in Westminster at Sheridan and 80th in response to a shooting. I'll have more details for you as I get them. pic.twitter.com/0GAM9UoBzq

The search warrant obtained by DenverChannel.com further stated that Webster claimed he “has mental health issues and just started a new prescribed medication today.” It’s not clear whether authorities were able to verify that information, however.

According to 9News Denver, “4 shooting victims at the Cedar Wood Square parking lot in Westminster, CO, outside the dentist office.”

Children’s Dentistry of Westminster posted a statement on Facebook. “We want to thank everyone in the community for the outpouring of support we received after the tragic and senseless incident that occurred today. We ask that you keep the victims in your thoughts and prayers. We would like to give a special thanks to the Westminster fire and police department who responded quickly and immediately took action. We are truly thankful for their efforts today. All Children’s Dentistry staff are now home and safe. Our office will be closed until Monday, June 18,” it read.

5. A Witness Described a Deliberate Shooting

James Sisneros, whose daughter was in a dentist office near the shooting when it occurred, told 9 News that she was locked inside while police investigated. He saw one of the bleeding victims.

“I [saw] one gentleman here on the side of the building,” he said to 9 News. “He didn’t look very good.”

Loading more stories
wpDiscuz
0
0
Would love your thoughts, please comment.x
()
x
| Reply
Jeremy John Webster was identified by CBS Denver as the suspect in the mass shooting outside a Westminster, Colorado dental office.