Kirstjen Nielsen, the Homeland Security secretary who has become a flashpoint in the family separations at the border, was driven out of a Mexican restaurant by protesters who disrupted her dinner.

“Secretary Nielsen, how dare you spend your evening here eating dinner,” the protester shouts, accusing Nielsen in being “complicit” in the separation and deportation of children. Nielsen kept her head down for most of the video and did not interact with the protesters. “Shame! Shame! Shame!” the protesters chanted. They held a sign that said, “no human is illegal.” Men in suits stood between the protesters and the secretary. “End family separation,” the protesters shouted. “If kids don’t eat in peace, you don’t eat in peace.” They shouted, “Not in D.C. Not in the U.S.” and “In a Mexican restaurant of all places….The F*cking gall. Shame on you….fascist pig.” They also shouted, “Abolish ICE” and “No borders, no wall, sanctuaries for all.”

Part one of a video of @mdc_dsa @DC_IWW and others shouting DHS Secretary Nielsen out of a restaurant. She doesn’t need to be kidnapping #immigrantchildren to deserve this treatment. Don’t give the regime a moment of rest. #KeepFamilesTogether pic.twitter.com/B3RfraOk1E

Here’s the response from the secretary’s office:

While having a work dinner tonight, the Secretary and her staff heard from a small group of protestors who share her concern with our current immigration laws that have created a crisis on our southern border.

“Do you hear the babies crying?” protesters asked. “How do you sleep at night?” The protesters also shouted such things as “End Texas concentration camps,” “These kids will never be reunited with their parents,” “What’s your salary Kirstjen, how much do you make locking up children?” and “Kirstjen Nielsen, you’re a villain, locking up immigrant children.” They repeatedly used the number 10,000 for children separated from their parents. (President Trump had tweeted the day before, “We must always arrest people coming into our Country illegally. Of the 12,000 children, 10,000 are being sent by their parents on a very dangerous trip, and only 2000 are with their parents, many of whom have tried to enter our Country illegally on numerous occasions.” The Associated Press reported on June 19, 2018 that over 2,300 children have been separated from their parents since May, some sent to “tender age” shelters.)

Margaret McLaughlin of Metro DC Democratic Socialists of America, which organized the protest, told a reporter for the Huffington Post, “Sec. Nielsen and everyone else who has carried out these brutal and cold-blooded orders to rip apart families should never be allowed to eat and drink in public again. While Secretary Nielsen’s dinner may have been ruined, it is nothing compared to the horrors she has inflicted on innocent families.”

Here’s video of the secretary leaving the restaurant:

DHS Secretary Nielsen just got driven out of a Mexican restaurant here on 14th Street by activists. DSA, I believe. pic.twitter.com/lTKutryXBO

The Metro D.C. Democratic Socialists of America posted a more than 10-minute long Facebook Live video of the confrontation, writing, “We’re in downtown DC disrupting DHS Secretary Kirstjen Nielsen’s dinner at MXDC. The irony isn’t lost on us that this is a Mexican restaurant. Nielsen has led the program to tell her to put an end to separating families, to step down as head of the department, and that ICE and CBP must be abolished #abolishICE #abolishCBP.”

This is apparently how the group knew Nielsen was at the restaurant, which is called MXDC:

The group then posted another video a short time later that said “cops came.”

Protesters expressed pride in themselves on social media.

I was very prepared to be arrested. This cannot continue. https://t.co/BaZN9PyIwl

The secretary has been increasingly in the middle of the firestorm over the family separations.

“We have to do our job. We will not apologize for doing our job,” says Homeland Security Secretary Kirstjen Nielsen on separating families at the border. “This administration has a simple message: If you cross the border illegally, we will prosecute you.” https://t.co/NdC1STntVi pic.twitter.com/Be3EMqHlWG

Kirstjen Nielsen has made a series of comments that have made her a controversial figure in the family separation debate. The Trump administration’s “zero tolerance” policy at the border has led to children being separated from their parents as their parents are prosecuted for unlawfully entering the country.

DHS takes very seriously its duty to protect minors in our temporary custody from gangs, traffickers, criminals and abuse.

For those seeking asylum at ports of entry, we have continued the policy from previous Administrations and will only separate if the child is in danger, there is no custodial relationship between 'family' members, or if the adult has broken a law.

We do not have a policy of separating families at the border. Period.

You are not breaking the law by seeking asylum at a port of entry.

This misreporting by Members, press & advocacy groups must stop. It is irresponsible and unproductive. As I have said many times before, if you are seeking asylum for your family, there is no reason to break the law and illegally cross between ports of entry.

Texas Monthly has posted one of the most detailed accounts of first-hand stories of what’s happening at the border. You can read it here.

(Photo by John Moore/Getty ImagesA two-year-old Honduran asylum seeker cries as her mother is searched and detained near the U.S.-Mexico border on June 12, 2018 in McAllen, Texas. The asylum seekers had rafted across the Rio Grande from Mexico and were detained by U.S. Border Patrol agents before being sent to a processing center for possible separation. Customs and Border Protection (CBP) is executing the Trump administration’s “zero tolerance” policy towards undocumented immigrants. U.S. Attorney General Jeff Sessions also said that domestic and gang violence in immigrants’ country of origin would no longer qualify them for political asylum status.

In the White House, Nielsen was a controversial figure even before she was appointed Homeland Security Secretary. She previously worked in the administration of President George W. Bush “as special assistant to the president and as senior director for prevention, preparedness and response at the White House Homeland Security Council” as well as running the “Transportation Security Administration’s offices of legislative policy and government affairs,” Newsweek reports.

She rankled some with what was perceived as a “rigid style” when she followed John Kelly to the White House as his deputy chief of staff, Politico reported. Her demeanor led some Trump loyalists to call her Nurse Ratched, the nurse in One Flew Over the Cuckoo’s Nest, according to Politico.

A government report lists Nielsen’s previous positions, stocks, and salary. She listed the following positions outside government for 2016 and 2017: 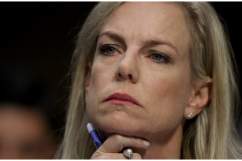 Is Kirstjen Nielsen Married? Does She Have a Husband?

Loading more stories
wpDiscuz
0
0
Would love your thoughts, please comment.x
()
x
| Reply
Kirstjen Nielsen, the Homeland Security secretary, was driven out of a Mexican restaurant by protesters. See the video.