A video from 2016 of a white woman yelling at a black teen selling candy outside of a store in California has gone viral again on social media amid a series of similar incidents. In the video, which you can watch above, a bystander intervened and stopped the woman from scolding the teen and then offered to buy all of her candy.

The video was first posted on Facebook in June 2016 by Andy Lizarraga. The incident happened in Rowland Heights, California. She wrote:

Outside of Target, someone was selling candy. As my mom and i were walking away, a lady went up to this person and told them she wanted to see their license to sell. She started harassing (her) to the point where (she) started to cry. A group people went up to her and told her to leave (the girl) alone. A man came up and started voicing his opinion and bought $80 worth of candy and started giving it away to the group of people. There are good people and bad people in this world and i saw it first hand. Screw all you ignorant people that have to complain about something.

The video was reposted on Twitter on July 11 by activist Simar Ahluwal.

This young black entrepreneur was selling candy when he was harassed by this woman who demanded to see his business license. An ally stood up for the kid & bought ALL the candy. Let’s find him & give this hero the praise & recognition he deserves.pic.twitter.com/kcCfoCtuk7

“This young black entrepreneur was selling candy when he was harassed by this woman who demanded to see his business license. An ally stood up for the kid & bought ALL the candy. Let’s find him & give this hero the praise & recognition he deserves,” he wrote.

Here’s what you need to know about the video:

The Passerby Who Intervened, Jay Lopez, Says the Woman Threatened to Call the Police & Send the Girl to Jail for Not Having a Permit

The man who intervened and then bought $80 worth of candy from the girl was identified as Jay Lopez. He talked to CBS Los Angeles about the incident in June 2016. He said the woman in the video threatened to call the police because the girl didn’t have a permit.

“She continued to yell at her and scream at her and tell her if she didn’t have a permit, that she was going to go to jail, that sheriffs were on their way,” Lopez told the news station. He said the girl was in tears when he got there. “When I walked up, she was crying hysterically,” he said.

After shutting down the woman who was screaming at the girl, Lopez went into the store and got money, which he used to buy the girl’s candy. He then handed out the $80 worth of sweets to other shoppers.

In the video, Lopez can be heard telling the woman, “You should be ashamed of yourself.”

Lopez told CBSLA his advice for people like the woman in the video, “Mind your own business. Take care of yourself and your family and everything will come together for you.”

Andy Lizarraga, who filmed the video and posted it to Facebook, told the news station, “I showed it to friends and family, not intending it to go viral at all and I guess people just started sharing it and sharing it.” The video has been viewed more than a million times since she posted it in 2016. Lizarraga said when she arrived, she saw the woman harassing the girl for selling candy for $1.

“She comes up to the little kid and is like, ‘Where is your license? Have you asked permission to be here?’’And then the kid is like, ‘No, I’m just selling candy. I’m trying to make some money,’” Lizarraga told CBS Los Angeles.

The Woman in the Video Was Never Identified, Though Her Daughter Asked the Original Poster to Take It Down

Andy Lizarraga told CBS Los Angeles the woman seen in the video never contacted her, but her the woman’s daughter did, asking her to take down the video. The elderly woman has not been identified. The girl in the video has also not been named.

In the video, the woman says, “have you seen the way they live?” and appears to be talking about a report about children being forced to sell candy as forced labor or trafficking. She appears to be referencing a 2008 report from ABC News. But there is no evidence that the girl was being forced to sell candy or that she was being trafficked in any way.

Police were not called to the scene, according to reports from 2016. 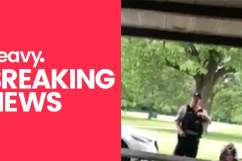