Before he entered politics, Jordan, a Republican, was the assistant coach at OSU from 1986 to 1994; Strauss, who died in 2005, was an Ohio State physician and team doctor from 1978 to the late 1990s. Three former wrestlers went public with the allegations in April, prompting an official investigation by the university. Jordan has repeatedly denied any knowledge of the alleged abuse.

1. The Former Student Athletes Claim Jordan Knew About the Alleged Abuse & Did Nothing to Stop it

Speaking with The Columbus Dispatch, Mike DiSabato, one of three former OSU wrestlers who have accused Strauss of sexual abuse, said, “He knew, did know, and it’s very disappointing that he has now denied knowledge, not once, but twice. I’ve never known Jim Jordan to be a coward, frankly, but this shows that his own interest in seeking higher office is more important than the health, safety and wellbeing of his friends and athletes who competed for him and with him.”

DiSabato, along with two other former wrestlers, claimed it was “common knowledge” that Strauss touched students inappropriately and regularly showered with them, according to NBC News.

One of the other wrestlers, Dunyasha Yetts, told NBC the wrestlers reported the abuse claims to Jordan on numerous occasions. “I remember I had a thumb injury and went into Strauss’ office and he started pulling down my wrestling shorts.” Yetts said he told Jordan right after the incident, and Jordan, along with former OSU head wrestling coach Russ Hellickson, spoke with Strauss right away.

According to Yetts, Jordan’s locker was located next to Strauss’, and Jordan told him “he’d kill him if he tried anything with him.”

Before DiSabato went public with the allegations, he claims to have spoken with Jordan. The congressman told DiSabato to “please leave me out of it.”

One of DiSabato’s former teammates said he didn’t directly report the abuse allegations to Jordan, though since it was common knowledge that everyone in the locker room reportedly knew, Jordan had to know about it.

2. Jordan has Denied Having any Knowledge of the Alleged Abuse

A month after Ohio State launched their investigation, Jordan told The Columbus Dispatch that he wasn’t aware of the alleged abuse.

Now, two months later, Jordan has repeated his denial through his spokesman Ian Fury. In an email to NBC News, Fury wrote: “Congressman Jordan never saw any abuse, never heard about any abuse, and never had any abuse reported to him during his time as a coach at Ohio State.”

3. Jordan Served as the Assistant Wrestling Coach From 1986 to 1994 While Strauss Practiced at the University

His time coaching at OSU overlapped with Strauss’ time practicing at the university in its entirety.

4. Jordan Immediately Entered Politics After Leaving His Position at the University

Jordan started his political career in the Ohio General Assembly, Ohio’s state legislature, after winning a seat in the November 1994 elections. He served in the state legislature until 2000, moving onto the Ohio Senate, a seat he would hold for six years before winning the race for Ohio’s 4th Congressional District in 2006. Jordan has since been re-elected five times, and is up for re-election again this November.

His opponent in the upcoming election, Democratic candidate Janet Garrett, released a statement about the allegations against Jordan:

Any allegation of sexual abuse against minors—or complicity regarding such abuse—is very serious. That damage cannot be undone. For any teacher, protecting kids is the absolute first priority—and I say that as a former kindergarten teacher. Ohio State has an obligation to get to the bottom of this with a thorough and fair investigation. Jim Jordan has an obligation to cooperate fully with that investigation.

According to FiveThirtyEight‘s tracker, Jordan has voted in line with President Trump’s positions 84.3 percent of the time. Jordan has repeatedly supported Trump in public comments and interviews.

5. Strauss Worked at Numerous Universities Including Harvard & Ohio State Officials May Have Known About the Alleged Abuse in the 1990s

Ohio State's investigation into Richard Strauss has expanded, with details now coming out that he ran a private medical office.

In addition, athletes from 14 different sports as well as non student-athletes have been interviewed. https://t.co/h0BeJCSHsR

Strauss also worked with the International Olympic Committee from the late 1980s to 1990s, contributing to sports medicine and sciences publication committees.

Although the allegations were initially made by wrestlers, The Columbus Dispatch reported that Ohio State’s investigation has expanded to include 13 other male athletic programs at the university, including: football, gymnastics, ice hockey, swimming, volleyball, cheerleading, fencing, and gymnastics. The investigation also includes non-student athletes.

Strauss left the university in the late 1990s, but according to The Lantern, Ohio State’s student newspaper, university officials may have known about the alleged abuse then. Before Strauss left on unclear terms, an unidentified Ohio State athlete said he was asked by his coach to testify against Strauss in a hearing. The student said he had been sexually assaulted by Strauss on two occasions. The former student didn’t testify, but he told The Lantern he knew three people who were in attendance for a hearing.

“I thought for sure he was fired,” he said. “Pretty much all the student-athletes knew this guy was a creep.” 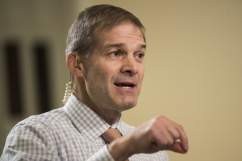