Bill Clinton was accused by social media observers of ogling singer Ariana Grande during the funeral for Aretha Franklin. You can watch video of the moment below and judge for yourself.

Gross… Watch Bill Clinton look Ariana Grande up and down when she sings at #ArethaFranklinFuneral and try not to throw up in your mouth. ? pic.twitter.com/aXQvcBmW2Y

The moment came as the 25-year-old Grande performed (You Make Me Feel Like) A Natural Woman at the funeral for the icon, which was attended by other prominent figures, such as Al Sharpton and Jesse Jackson, who were seated near Bill Clinton, 72. But it was Bill Clinton’s supposed wandering eyes that sparked the Internet’s ire.

Aretha’s funeral was held at the Detroit’s Greater Grace Temple on Friday, August 31, 2018, capping days of mourning for the legend, who passed away from pancreatic cancer on August 16, 2018. The day before the funeral, fans had a chance to pay their respects to Franklin before her gold casket at Charles H. Wright Museum of African American History in Detroit.

Bill Clinton also spoke at Franklin’s funeral, but all the Internet wanted to talk about was how he looked at Ariana.

But is thinking about @ArianaGrande ! pic.twitter.com/lSsePMPEHC

Bill Clinton looks at Ariana Grande like I look at stuffed crust pizza.

Find someone who looks at you like @BillClinton looks at .@ArianaGrande #FridayFeeling pic.twitter.com/kH7fEilkU7

People on social media brought out the jokes. “@ArianaGrande Got Jesse Jackson and Bill Clinton Ready To Risk It All ?? #arethahomegoing,” wrote one woman.

“The optics of this photo is a tad bit creepy… This is not appreciation for skill or talent this is just base lust, & we still celebrate that in our culture. Why? Should we celebrate and publicize our baser instincts…. it’s unseemly & what was once shamed is no longer!” wrote another upset woman on social media.

Watch Bill's eyes go right to @ArianaGrande's butt. Jesse Jackson doesn't look down, but @BillClinton does. This is a funeral, come on man. pic.twitter.com/5zu555IFXb

Some people trotted out the GIFs and the memes.

internet reaction to "#BillClinton" looking at #ArianaGrande at #ArethaFranklinHomegoing pic.twitter.com/wzzODLiPN0

This is for the people who are blaming Ariana Grande for that dress instead of expecting Bill Clinton and Jesse Jackson to behave themselves at #ArethaHomegoing pic.twitter.com/wpnukPQ0Kn

“Please keep Bill Clinton away from Ariana Grande,” wrote a man on Twitter, of the notoriously womanizing ex-president. Wrote another man: “Gross… Watch Bill Clinton look Ariana Grande up and down when she sings at #ArethaFranklinFuneral and try not to throw up in your mouth. ?”

Clinton Had His Defenders on Social Media Too

Other people thought Bill was getting a bad rap. “How the hell do you know he’s not appreciating the performance? He’s just smiling lmao,” wrote one man.

Everyone is calling out Bill Clinton for ogling Ariana Grande but truth be told, I think that’s just his “look.” I don’t think he knows where he’s at when the mind control switch is off.

Some people didn’t think Grande’s dress was appropriate for a funeral.

Women of today. Ariana Grande with a Skimpy dress at a funeral & when she bends over forward the Reverends + Bill Clinton see her butt cheeks. Lord have mercy! #ArethaHomegoing pic.twitter.com/6xFRpMEEUi

Poor Bill Clinton and Al Sharpton. How are they supposed to look sad at Aretha Franklin‘s funeral when Ariana Grande is wearing a short cut dress at the ceremony. Bad taste AG.

“He’s looking at the performer and smiling. Like most of the rest of the audience,” wrote another. Opined another man, “If Ariana Grande was singing 3 feet away from me I’d be checking her out up and down way more than Bill Clinton did. I thought the man was reserved honestly. I give him credit.” 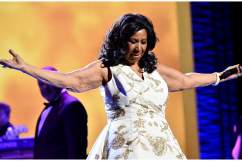