A man who warned “this place will burn” in a threatening email has been arrested in connection to the Holy Fire in Orange County, California, which has burned more than 4,129 acres since it started on August 6, police say. Forrest Gordon Clark is scheduled to appear in court Thursday as firefighters continue to battle the blaze, which is only 5 percent contained. Here is everything we know so far about Forrest Gordon Clark:

On August 8, Forrest Gordon Clark, 51, was booked into Orange County Jail on suspicion of two counts of felony arson, one count of felony threat to terrorize, and one count of misdemeanor resisting arrest. He was first questioned by deputies around 10:15 a.m. on Tuesday and then arrested on Tuesday night, The OCR reported. He has a court appearance scheduled for Thursday.

He is being held in lieu of $1 million bail, ABC 7 reported. You can watch a video of his arrest below:

RAW VIDEO: Arson suspect detained in connection to Holy Fire | ABC7Raw video shows Forrest Clark being detained on the first day the Holy Fire erupted in the Cleveland National Forest. Clark was booked on suspicion of arson in connection to the massive blaze. Details: abc7.la/2KDOuFJ Don't forget to subscribe to our channel. Follow us for more! Facebook: abc7.la/2fAUSCp Twitter: abc7.la/1fb5GjS Instagram: abc7.la/2Kz2VMP2018-08-08T20:41:10.000Z

If he’s convicted of all the charges against him, he could face up to life in jail, ABC 7 reported. He’s not suspected of being connected to any other fires in Orange County.

According to Clark’s Facebook page, he attended Orangewood Academy.

2. His Cabin Is the Only One Out of 14 in the Area Still Standing from the Fire

Clark owns a cabin in the area that was devastated by the fire, and his cabin was the only one out of 14 in the area that is still standing, The OCR reported. He has lived at Cabin 14 for more than a decade.

But he may have had a history of battling mental illness. A man with his same name and birth date was involuntarily held at a treatment center in 1996 for mental illness, The OCR noted. And in 2012, Mary Masayo Clark was given a temporary restraining order against her son, who has the same name and birth date as Forrest Gordon Clark, The OCR found. She said Clark had demanded money several times. “There is no peace in my home when he is here,” she said, according to court records.

3. A Volunteer Fire Chief Received Threatening Emails from Clark, & Clark Stripped Down to His Camouflage Underwear When Deputies Arrived on Tuesday

Mike Milligan, Volunteer Fire Chief, told The OCR that he had received threatening emails from Forrest Gordon Clark last week. “He has issues,” Milligan said. He said Clark ran through the community screaming last week and then later said in an email that Holy Jim would burn.

One of Clark’s last public Facebook posts, from July 18, speaks about two men (neither one Mike Milligan) that he was suing, and how someone stole a legal case from his cabin. His post reads, in part: “NOTICE. Someone stole a Legal Case from my cabin … Highly unlikely that anyone would steal it, unless you r involved w/ thia drug dealer. [NAMES] lied to their Attorney. Attorney dropped suit due to FALSE STATEMENTS! Attorney said he would glad to be co-counsel in a LAW SUIT against [NAMES.] [NAME 1] hangs out gang members on weekends, stays up all night, runs his 2 stroke water pump all day & night.
[NAME 2]’s teeth are all rotted out from [NAME 1]’s Speed. There are (7) eye witnesses that are eager to testify. (2) people from Holy Jim went to the E.R. after snorting [NAME 1]’s METH.  I have smelled Eather & other chemicals while they r COOKING, than [NAME 1] sells SPEED/METH/CRANK… In HOLY Jim Canyon. … 1 time this guy was yelling ‘[NAME 1] what the F? Wheres my s***! Hay do u know where [NAME 1] is? Me ‘ I that guys a jerk, dont know.’ Than I heard glass break, & after a few mins the big guy gang mamber, left. I looked around there was a broken window & blood. I told the HJ fire cheif, pretty sure he called the cops…” [sic]


On Tuesday, Clark had stripped down to just his camouflage underwear at one point when deputies stopped by, according to The OCR. You can see a photo from that encounter here.

Clark had previously claimed that Milligan was running drugs, The OCR reported.

4. Clark, Who Had a Feud with His Neighbors, Posted Conspiracy Videos on Facebook & Photos of a Cancer on His Face

Clark’s neighbor and other cabin owners said they had a feud with Clark that spanned nearly a decade, The OCR reported. Clark sometimes claimed he could read minds, The OCR added.

His Facebook page contains a variety of posts, ranging from sharing conspiracy theory videos to talking about a cancer he was fighting on his face. He shared some graphic photos of the cancer on his face, but later shared that the cancer had healed.

Here is a post he made on July 17 about Nabisco:

Some of the videos he shared had titles like “George Soros Tried to Ban This Video,” “Pope Arrested! Worldwide Media Blackout,” “Over 50,000 Sealed Indictments Joe Biden & Other High Level VIPs Set for Gitmo,” and “Trump Prophecy: Third Temple Is Now Real.”

He also shared a petition to remove Jeff Sessions, talked about his religious beliefs, and the medicinal value of cannabis.

5. Clark Loved Animals & Posted Photos of His 19-Year-Old Cat & Wild Animals He Ran Into in the Area

FacebookA post Clark made about caring for his cat.

He seems to love animals, according to his social media posts. He posted about his 19-year-old cat and the treatments he was doing to help his cat have a better life. His public Facebook posts periodically included posts about his cats. It’s not known if someone is caring for his cats now that he’s been arrested.

He also shared a post about how upset he was when he saw that a wild cat had been hit by a car.

And he shared a post from West Horsethief Trail Trabuco Canyon, showing a skunk that he referred to as “One of my little forest friends.”

The Trabuco Canyon area is one of the regions that had to be evacuated due to the Holy Fire. 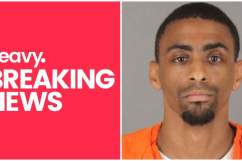 Read More
5 Fast Facts, Breaking News, California, Fire
Forrest Clark was arrested in connection to the Holy Fire, after stripping to his boxers in front of deputies. He posted conspiracy videos and has a 19-yo cat.