Getty Grimes is a Canadian music producer and the former girlfriend of Elon Musk, though reports of a recent breakup have started to circulate on social media.

Claire Elise Boucher, AKA ‘Grimes’, is a Canadian singer, songwriter and record producer who has been in a relationship with Elon Musk for several months now.

Musk and Grimes appear to have since unfollowed one another on social media, though it’s unclear if that means they’re officially broken up.

1. Grimes Has Been Described as the ‘Coolest Girl in Canada’ by Globe and Mail

According to an interview in Globe and Mail, Grimes grew up in Vancouver and taught herself to play piano by playing Chopin. By high school, Grimes reported that she started to experience bullying, saying, “I started being identified as being weird and then I was alienated, and then being alienated started being part of my identity.”

2. Grimes Studied Neuroscience & Philosophy at McGill University Before Her Musical Career Took Off

when u go to bed in tears of self doubt and exhaustion and wake up and the track is finished and perfect … best feeling on ?

Grimes attended McGill University in 2006, and claims to have had dreams of potentially joining Canada’s space program before she eventually fell into a more creative crowd.

“I just kind of got addicted to [Garage Band],” Grimes said. “It was just like a thing I sort of started doing and as soon as I realized I could do it, I didn’t really want to do anything else.”

3. Musk & Grimes Made Their Relationship Public at the 2018 Met Gala

Grimes and Musk made their relationship official when they walked the red carpet at the 2018 Met Gala. That same day, Page Six broke news of their relationship, claiming they’d met about a month before the gala. Their meet-cute moment was a little unusual: Musk reportedly became aware of Grimes after he went to tweet a joke about artificial intelligence, and saw that Grimes had already tweeted it.

Since attending the Met Gala, Musk and Grimes have kept their relationship largely under wraps, so it wasn’t until news of a potential breakup three months later that Musk and Grimes resurfaced. As of August 21, Mashable has reported that Musk unfollowed Grimes on Twitter.

5. Azealia Banks Has Since Posted a Conversation She Claims to be With Grimes 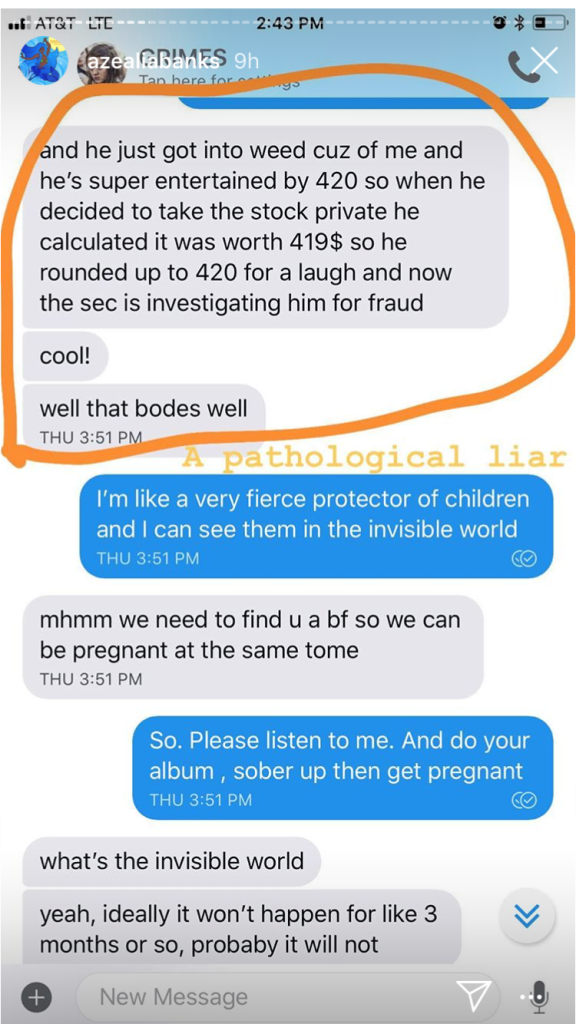 Azealia Banks has posted a series of social media posts about Elon Musk and Grimes in the last few days, most recently a screenshot of an alleged conversation with Grimes in which Grimes claims to be pregnant, or at least to be joking about it. What’s more, Grimes allegedly speculates Musk’s reasoning for his stock estimations.

Read More
5 Fast Facts
wpDiscuz
0
0
Would love your thoughts, please comment.x
()
x
| Reply
Grimes is a Canadian music producer and the former girlfriend of Elon Musk, though reports of a recent breakup have started to circulate on social media.