National Weather Service Hurricane Lane is poised to hit the Big Island of Hawaii within a few days.

Late on Tuesday, Hurricane Lane was strengthened to a category five storm, per CBS News, with maximum sustained winds of 160 mph as it approaches Hawaii.

Here’s what you need to know about tracking the hurricane and staying up to date on the forecast. 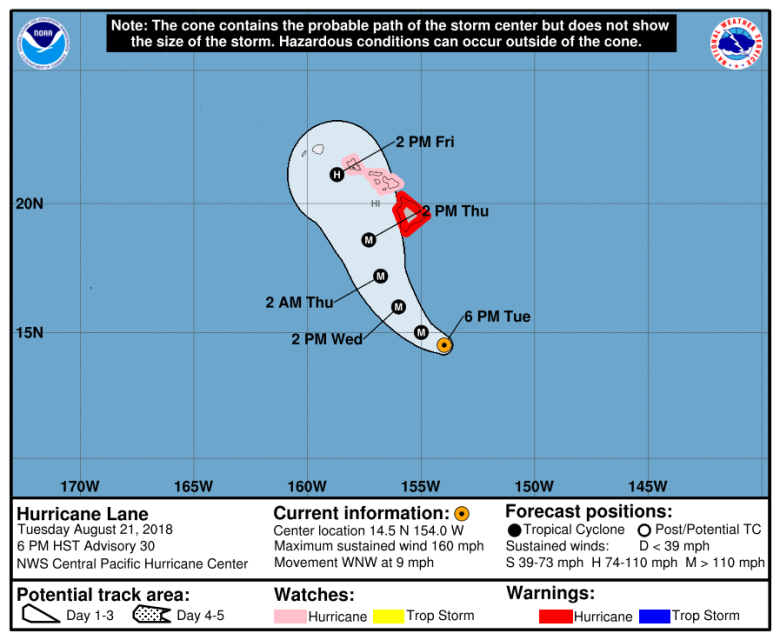 National Weather ServiceHurricane Lane is poised to hit the Big Island of Hawaii within a day.

As of 1 AM ET, Hurricane Lane was approximately 375 miles south of Kailua-Kona, and 535 miles south of Honolulu. The storm is predicted to move near or over the islands by Saturday at the latest.

Of course, it’s important to keep in mind that the storm doesn’t have to move completely over the islands in order for there to be hurricane-force weather affecting the island. The center of the storm could be a hundred miles away and still leave an impact, since hurricane-force winds can extend for miles.

Honolulu Mayor Kirk Caldwell has confirmed that the game plan for the storm is to plan for the worst, per a conversation with CBS News on Monday.

“Some people might say, ‘Another hurricane, it didn’t hit us last time, we don’t need to worry.’ No, we got to plan for the worst and hope for the best,” Caldwell said.

Read More
Breaking News
wpDiscuz
0
0
Would love your thoughts, please comment.x
()
x
| Reply
Hurricane Lane has been categorized as a level-five storm as it closes in on the Hawaiian islands in the coming week.