As the Ohio special election in the 12th Congressional District goes down to the wire, many people are wondering: At what point is a mandatory recount triggered?

What are the recount rules in Ohio congressional districts?

Thus, Balderson, a state legislator, was ahead by 0.9 percentage points, or 1,754 votes, with all precincts counted. However, there are provisional and absentee ballots still outstanding, according to CNN and Cleveland.com. “The results won’t become official until more than 600 additional ballots are tabulated in 10 days: those from provisional voters and absentees mailed in from overseas and the military,” reported The Columbus Dispatch.

The Ohio Secretary of State released a statement saying: “County boards of elections reported that 3,435 provisional ballots were cast and there were 5,048 outstanding absentee ballots. Under state law, boards of elections cannot begin counting these ballots until the 11 th day after the election, August 18, when boards may begin the official canvass.”

When I decided to go to Ohio for Troy Balderson, he was down in early voting 64 to 36. That was not good. After my speech on Saturday night, there was a big turn for the better. Now Troy wins a great victory during a very tough time of the year for voting. He will win BIG in Nov.

O’Connor did not concede the race:

Here are the recount rules in Ohio:

Have you voted yet? It's vital you make your voice heard in this election. Find your polling place now and vote before polls close at 7:30 tonight! https://t.co/0Giyo7UVG8 pic.twitter.com/A28DfvypYQ

According to the National Conference of State Legislatures, these are the margins needed to trigger an automatic recount in Ohio:

0.25% or less for statewide office

Ohio code reads: “If the number of votes cast in any district election for the declared winning nominee, candidate, question, or issue does not exceed the number of votes cast for the declared defeated nominee, candidate, question, or issue by a margin of one-half of one per cent or more of the total vote, the secretary of state shall order a recount which shall be conducted as provided in sections 3515.04 and 3515.05 of the Revised Code.”

Because the Balderson and O’Connor race is not a statewide office – it’s a Congressional district race – the race would need to be within 0.5 percent to trigger the mandatory recount. CNN also reported during its live broadcast that a margin of less than 0.5 percent is needed to trigger the automatic recount provisions in Ohio.

A Requested Recount in Ohio

In a facts sheet on Ohio recount rules, the American Civil Liberties Union wrote, “If the margin of victory is larger, any losing candidate may request a recount; or any group of five or more voters may request a recount for an issue. Applicants must file in writing, at the Board of Elections (BOE) of every county in which they want a recount, within five days after the initial results are announced, and pay $50 for each precinct in which they want a recount.”

According to the ACLU, “Recounts must be scheduled within ten days after the application is filed.”

The Ohio district is normally considered a safe seat for Republicans as it hasn’t elected a Democrat since the 1980s, according to Vox. It’s also a district that Trump handily won in the 2016 presidential race. The polls had predicted a close race.

There was a requested recount in the Republican primary for the special election.

The race seesawed back and forth all night. With 99 percent of the vote in, Republican Troy Balderson’s lead stood at 50.1 percent of the vote compared to 49.3 percent for Democrat Danny O’Connor. The race is considered too close to call. You can see the election results here on the Ohio Secretary of State’s website.

You can read more about the race here. 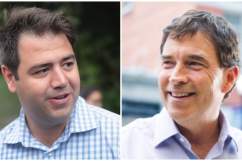 Loading more stories
wpDiscuz
0
0
Would love your thoughts, please comment.x
()
x
| Reply
When would an automatic recount be triggered in Balderson versus O'Connor special election in Ohio? See the recount rules.