Screenshot of Video Jason Kessler gets yelled at by his dad while livestreaming with Patrick Little.

Jason Kessler, notorious alt-right organizer of the Unite the Right rally in Charlottesville and Washington D.C., was caught on live video being scolded by his father for using his parents’ bedroom to livestream his message.

Kessler was talking with fellow neo-Nazi Patrick Little when his dad comes in the room and starts yelling at him. “Hey! You get out of my room!” Kessler’s father can be heard shouting in the background. “I want this to stop in my room, Jason, this is my room.”

Little asks if Kessler has a “drunk roommate.” Kessler, 34, finally admits that it’s his dad yelling at him and that he can’t afford to live on his own due to several lawsuits he is facing over the Unite the Right rally that took place last year. The first Charlottesville rally turned deadly when protesters clashed at the first rally, which resulted in the death of Heather Heyer after a car was driven into a crowd of counter-protestors.

Twitter had a good laugh at the video, with users poking fun of Kessler living with his father while spreading what many consider a message of hate to the world.

“New rallying cry against Nazis and white supremacists: ‘GET OUT OF MY ROOM,'” Twitter user JewishAction wrote.

New rallying cry against Nazis and white supremacists: "GET OUT OF MY ROOM."

The fact that he doesn't even have a job or money and is still considered a leader of a "movement" is the definition of white privilege. pic.twitter.com/UUzpsbiTD0

“White supremacist and “Unite The Right Organizer” Jason Kessler gets yelled at by his dad for being a racist while live-streaming. Because of course he lives with his parents,” another user posted on Twitter. 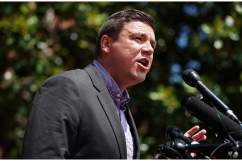 Read More
Breaking News
Follow Heavy ↓
Jason Kessler gets yelled at by his dad on live video after he is caught broadcasting his message from his parents' bedroom at home, where Kessler lives.