The woman sitting behind Judge Brett Kavanaugh has emerged as a Twitter star as she has been accused of smirking when Democrats are speaking and looking “smug” during the hearing. The woman has been identified as Zina Bash, 36. Bash was sitting directly behind Kavanaugh during the first day of his Supreme Court confirmation hearing on September 4. The hearing has been interrupted by protests from sitting Democrats on the committee as well as vocal protesters who have tried to shut down proceedings. Some protesters have even invoked the popular Hulu TV series, The Handmaid’s Tale.

Bash is a seasoned judicial and political mover in the nation’s capital. She has worked in D.C. since 2007, for Kavanaugh as well as Senator John Cornyn. In addition, Bash was a director on Ted Cruz’s ill-fated presidential campaign in 2016.

1. Bash Is Regarded as One of the Most Beautiful People in D.C.

Zina Bash: “What they’re missing is a long history, a very long record of enforcing laws that protect the American people and the American economy.” pic.twitter.com/uOvOJ6bSwB

In July 2017, Bash was put on The Hill’s 50 Most Beautiful list. Bash is identified as a Republican from McAllen, Texas, who is married. She has a daughter named Maria Izabella, who goes by Mabel. Bash’s husband is, John Bash III, the U.S. Attorney for the Western District of Texas. The couple attended Harvard together. In their 2007 New York Times’ wedding announcement, the newspaper wrote Bash was set to become a “law clerk this month for Judge Brett M. Kavanaugh.” John Bash was at the time about to begin working as a clerk to then-Supreme Court Justice Antonin Scalia

John Bash was sworn into the role of U.S. Attorney in April 2018, reports the San Antonio Express-News. The Express report said that John Bash was planning to make border security a priority for his office. He is quoted by the newspaper as saying, “We are a nation of immigrants, but I don’t understand the folks who say we shouldn’t enforce the law against people who are literally picked up illegally crossing the border. The folks that criticize our enforcement efforts have an obligation to say what those enforcement efforts should look like.” John Bash is a native of Columbia, Maryland. Kavanaugh officiated the swearing-in ceremony for John Bash in April 2018, according to the Express-News.

When asked about balancing her career with being a parent, Bash told the Hill, “Though I miss Mabel tremendously during the day, I have felt that — because I’m part of a team working every day to improve the welfare, safety and security of the country she will grow up in — I’m doing this for her.”

2. Bash Worked in Immigration Policy for the Trump White House

The profile of Bash in The Hill lists her job as working on the Domestic Policy Council. A year later, Bash was named as the senior counsel to Texas Attorney General, Ken Paxton. The press release announcing her appointment referred to her job in the White House as “Special Assistant to the President for regulatory reform, legal and immigration policy.”

Shortly after that appointment, Bash was announced by the National Law Journal to be a member of Kavanaugh’s confirmation team. Bash is said to have assisted the judge in his preparation for the hearings. Bash was joined by former Arizona Senator Jon Kyl on the confirmation team.

GettyKavanaugh and Bash pictured together in July 2018.

Prior to President Trump’s election, Bash was the deputy director of policy and communications for U.S. Senator Ted Cruz’s presidential campaign. Bash received her bachelor’s from Harvard in 2004 and graduated from Harvard Law School in 2007. Above the Law reports that Bash began at Columbia Law School and later transferred to Harvard. Bash also earned an M.B.A from the Wharton School in Pennsylvania in 2013, according to her LinkedIn page. Bash was also previously counsel to Senator John Cornyn.

According to Above the Law, Bash is “ridiculously rich.” An anonymous source tells the website, “The young heiress reports [as much as] $18 million in assets, generating passive income of over $1 million last year…. [B]ut instead of using her wealth and connections to sit on a beach, she is using it to immerse herself in conservative politics, first as deputy director of policy for Ted Cruz and now for Trump’s White House.” The story goes on to say that Bash’s passive income is more like $350,000 per year and that “her total assets are actually somewhere between $1.8 million and $6.75 million.”

4. Her Father Made a Documentary Titled, ‘The Hoax of Man-Made Global Warming’

Bash’s father is Dr. Lawrence Richard Gelman, a “distinguished physician” in the Rio Grande Valley, so says a feature in Empower Texans. That feature says that Dr. Gelman “is a second-generation Polish-American Jew whose parents barely escaped the Holocaust and found solace in America.” Dr. Gelman met his wife, Maria Esperanza, in Monterrey, Mexico, and the couple was married in 1979. They have four children together, Zina, Alexander, Rachel and Sharon. When asked about his politics in the article, Dr. Gelman says, “I don’t belong to anything, I hate politics…We [as a society] are affected by what goes on in Washington, and Austin; my involvement wasn’t intentional, it was more of a self-defense. When you’ve got your kids, [you] want to try to return the way things used to be, the way things are supposed to be.”

In 2017, Dr. Gelman wrote and produced a documentary called, The Hoax of Man-Made Global Warming. Dr. Gelman called climate activists “hucksters” who “perpetrate ad convenient lie.” In the early 2000’s, Dr. Gelman hosted a political talk radio show titled, Talk Back with Dr. Lawrence Gelman. Dr. Gelman told Texas Border Business about elaborated on his feelings about climate change in an interview. He said, “We don’t believe [man made climate change] is occurring. Climate change and temperature have been going on forever, but it’s nothing to do with what man is doing. We believe that it’s being used by government and others for their agenda.”

5. Bash Has Been Accused of Using a ‘White Power’ Hand Symbol During the Hearing, but Her Husband Says It Was Just the ‘Random Way She Rested Her Hand’

Watching the hearing &people are getting THROWN OUT every few minutes…EVERY time they kick one out, another speaks up. God bless those people! This is shocking. Not sure who the woman behind kavanaugh is but I have a desire to punch her face.Hard. #StopKavanaugh pic.twitter.com/gn9UWCWHx6

As Kavanaugh’s hearing went on, Bash became something of a viral sensation. Here are some of the best reactions to Bash’s starring role in the Kavanaugh hearing:

Who is the woman behind #kavanaugh at the hearing with that smug look on her face. She won’t be so smug when her grandchildren are forced to have abortions in back alleyways. Nvm, rich women won’t have to.

As protesters yell and disrupt the hearing the woman behind kavanaugh does not once look to see whats happening. This is a fucking movie. Lol. pic.twitter.com/uEmSsRW4CH

OMG! Who is that amazingly beautiful woman sitting behind Kavanaugh? #KavanaughConfirmationHearing

Who is that snarky woman seated next to Don McGahn directly behind Brett Kavanaugh? I hope not to learn that she is a government employee. I could do without her snickering little smile throughout this grave proceeding.

Does anyone know who the woman with the long dark hair is sitting behind Kavanaugh? She is getting way more than her 15 minutes.

#StopKavanaugh Unbelievable! Who is that woman right behind Kavanaugh making faces and over reacting during the comittee’s meeting?No class!

At one point during the hearing, Bash’s fingers appeared to be positioned in the “OK” sign. Some white supremacists, members of the alt-right and the so-called alt-lite, along with other Trump supporters, have adopted the “OK” symbol as a way to troll people on the left. It began on 4chan as a “troll effort,” but has become more popular, with many people making the symbol in an effort to “own the libs,” according to the Anti-Defamation League. As a result, many have started to believe some usage of the symbol is a signifier of white supremacy or racism. And that led prominent members of the “Resistance” and others on the left to accuse her of using a “white power” symbol.

Mark Pitcavage, a senior research fellow with the Anti-Defamation League, said, “It began as a 4chan troll effort (I’ve written about its origins) but it has evolved into a symbol used by the alt right (and, occasionally, other white supremacists), the alt lite, and also various MAGA-type Trump supporters. Most still use it to troll (to “own the libs”).”

Bash’s husband took to Twitter to deny his wife had meant anything by the position of her fingers.

“The attacks today on my wife are repulsive. Everyone tweeting this vicious conspiracy theory should be ashamed of themselves. We weren’t even familiar with the hateful symbol being attributed to her for the random way she rested her hand during a long hearing. Zina is Mexican on her mother’s side and Jewish on her father’s side,” John Bash wrote.

YouTubeZina Bash was accused of using a “white power” hand gesture while sitting behind Judge Brett Kavanaugh at his confirmation hearing.

John Bash added, “She was born in Mexico. Her grandparents were Holocaust survivors. We of course have nothing to do with hate groups, which aim to terrorize and demean other people — never have and never would. Some of the Twitter comments have even referred to our baby daughter. I know that there are good folks on both sides of the political divide. I hope that people will clearly condemn this idiotic and sickening accusation.”

You can read more about the “OK” symbol issue here or by clicking the link below: 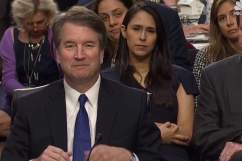 Loading more stories
wpDiscuz
0
0
Would love your thoughts, please comment.x
()
x
| Reply
The woman sitting behind Judge Brett Kavanaugh is becoming a Twitter star as she has been accused of smirking when Democrats speak and looking "smug."