Robert Bowers yelled “all Jews must die” as he entered the Tree of Life Congregation Synagogue in Pittsburgh, where he fatally shot multiple people in an anti-Semitic massacre Saturday morning, witnesses say. The horror unfolded in the Squirrel Hill neighborhood of the city. There were close to 100 people inside of the synagogue at the time of the attack. Bowers, a 46-year-old resident of Pittsburgh, was arrested at the scene.

As many as 12 people were shot, including four police officers. The Associated Press reports that the shooting took place during a bris, a baby naming ceremony. The AP later said that a total of 10 people had been killed at the scene. CBS Pittsburgh is reporting as of 3:17 p.m. on October 27 that 11 people have been killed.

Others have said the shooting occurred during Shabbat services at the conservative Jewish synagogue. Of that 12, eight are reported to have died, according to NBC News, but police have not confirmed the number of dead. The police officers’ injuries are not life-threatening. WPXI later reported that one officer has undergone surgery and is considered in critical condition.

An hour before the shooting, Bowers wrote on a social media site, Gab, “HIAS likes to bring invaders in that kill our people. I can’t sit by and watch my people get slaughtered. Screw your optics. I’m going in.” HIAS is the Hebrew Immigrant Aid Society, a group that helps refugees.

There is no further threat to the community, police said. Officials have said that rumors about possible explosives at the scene are untrue. A hotline has been set up for the families of the victims: 412-432-4400. The investigation is being led by federal authorities. The incident is being treated as a hate crime by investigators. A Go Fund Me page has been set up for the victims.

'Multiple casualties' in shooting at Pittsburgh synagogueAuthorities responded to a shooting Saturday morning near the Tree of Life synagogue in Pittsburgh, according to Allegheny County Sheriff's Deputy Kevin Kraus. Three police officers have been shot and there are fatalities, officials said at an impromptu press conference. The shooter has surrendered, they said.2018-10-27T15:59:12.000Z

NBC News’ Tom Winter reports that Bowers was armed with an AR-15 ‘style’ rifle, in addition to multiple handguns. CNN’s Shimon Prokupecz later reported that Bowers had a license to carry a firearm. Since 1996, Bowers has bought six guns.

KDKA has described Bowers as being a “heavy-set white male with a beard.” When Bowers emerged from a standoff with police, he was crawling due to injuries. The station also reported that Bowers is alleged to have opened fire on responding officers. WXPI reports that Bowers was shot in the torso. He is being treated at Allegheny General Hospital.

According to NBC News, Bowers was shot at least once by police during the exchange of gunfire at the synagogue. He was taken to the hospital and is undergoing treatment, NBC News reports.

The former president of the synagogue, Michael Eisenberg, told the Pittsburgh Post-Gazette that the shooting took place on the third floor of the building. Eisenberg said that typically there would be a children’s class on that floor but had been canceled on the day of the attack.

Police did not find any explosive devices inside the building.

2. Bowers Said on Gab That He Did Not Vote for Donald Trump Because Trump Has Allowed Jewish People in His Administration & Among His Supporters

Bowers was an active poster on an alternative version of Twitter, Gab, which is popular with white supremacists, white nationalists, members of alt-right groups and others who have been kicked off of mainstream social media sites. Bowers went by the moniker One Dingo, @onedingo, on the site. In his bio section, Bowers wrote, “jews are the children of satan. (john 8:44) — —- the lord jesus christ is come in the flesh.” Shortly after the shooting at the Tree of Life Congregation, Bowers’ Gab account was deleted.

In a post a few days before the shooting, Bowers wrote, “Trump is a globalist, not a nationalist. There is no #MAGA as long as there is a k*** infestation. #Qanon is here to get patriots that were against martial law in the 90’s to be ones begging for it now to drain muh swamp. But go ahead and keep saying you are #Winning.” That same day, Bowers wrote, “amazing amount of division on gab today. glas the overwhelming jew problem has been solved so we can now fight with each other.” In another message, Bowers wrote of Trump, “For the record, I did not vote for him nor have I owned, worn or even touched a maga hat.” Bowers is a registered voter but is unaffiliated. Online records show that Bowers had no criminal record in the state of Pennsylvania.

Gab issued a statement after the shooting saying, “Gab took swift and proactive action to contact law enforcement immediately. We first backed up all user data from the account and then proceeded to suspend the account. We then contacted the FBI and made them aware of this account and the user data in our possession.” In a separate post on the company’s website, a spokesperson said, “Words are not bullets. Social media posts have a body count of zero. The sole responsibility for today’s horrific actions lies with one person. We will do everything in our power to work with law enforcement to see that justice is served.”

You can read more about Bowers’ social media posts here or at the link below: 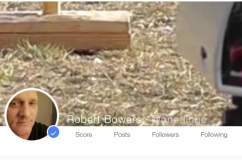 3. A Witness Described the Shooting as Being Like a ‘Loud Crash in the Hallway’

SPECIAL REPORT: 'Multiple casualties' reported in Pittsburgh synagogue shootingThe suspected shooter is in custody after opening fire at the Tree of Life synagogue.2018-10-27T16:13:03.000Z

Stephen Weiss, a resident of the Squirrel Hill neighborhood who was present inside the synagogue, told the Pittsburgh Post-Gazette that the shooting “sounded like a loud crash in the hallway.” Weiss said that he ran through the building hearing what sounded like an “automatic weapon.” He joined a group sheltering in place in the basement.

We send our thoughts and prayers to those affected by this morning’s tragedy in Pittsburgh. We will continue to pray for everyone involved.

There are three congregations in the synagogue, the basement was where the New Life congregation was having their Shabbat service, reports KDKA.

4. A Former President of the Synagogue Said that the Department of Homeland Security Have Run Safety Drills at Tree of Life

The synagogue’s former president Michael Eisenberg said that while he was president, he had the Department of Homeland Security come to Tree of Life. Eisenberg told the Post Gazette the agency ran safety drills. Eisenberg added, “We had to step it up as far as security, although there had been no threats. The building isn’t designed for today as far as security purposes.” Eisenberg went on to tell CBS Pittsburgh that a maintenance worker who escaped was able to do so because of the DHS’ work. Eisenberg said, “He was able to get out of the building… because the exit doors were working well. I just can’t tell you how thankful I am just to do that one task that Homeland Security told us to do.”

Police Official: “At this time, the suspect in the shooting is in custody. We have multiple casualties inside the synagogue.” https://t.co/7o3SyKywUb pic.twitter.com/bHgWziibtv

According to the synagogue’s website, Shabbat morning services were taking place inside as reports about a shooting emerged. The website says that the congregation was founded “more than 150 years ago” and is a “conservative Jewish congregation” but “is also progressive and relevant to the way we live today.” The rabbi is Rabbi Hazzan Jeffrey Myers who has been with the congregation since August 2017. Cox Media Group’s Dorey Scheimer tweeted about the congregation, “I am so sick. Squirrel Hill is the Jewish neighborhood in Pittsburgh. Tree of Life is the largest conservative synagogue. Saturday morning is the busiest/most attended service.”

5. The Head of the ADL Has Described the Victims of the Shooting as Being ‘Targeted’

We are devastated. Jews targeted on Shabbat morning at synagogue, a holy place of worship, is unconscionable. Our hearts break for the victims, their families, and the entire Jewish community.

The CEO of the Anti-Defamation League tweeted his condolences to the victims of the shooting. Jonathan Greenblatt wrote that the victims of the attack were “targeted” because of their religion. Greenblatt tweeted, “We are devastated. Jews targeted on Shabbat morning at synagogue, a holy place of worship, is unconscionable. Our hearts break for the victims, their families, and the entire Jewish community.” He added, “We are actively engaged with law enforcement to understand the extent of this anti-Semitic attack and we will work together with communities across the country to push back on prejudice wherever it appears.”

President Trump, asked about gun laws, says the Pittsburgh synagogue should have had armed security at the bris and the gunman wouldn’t be able to do what he did pic.twitter.com/y9Cq59wPM5

Pennsylvania Governor Tom Wolf has described the shooting as an “absolute tragedy.” Gov. Wolf added, “We must all pray and hope for no more loss of life. But we have been saying ‘this one is too many’ for too long. Dangerous weapons are putting citizens in harm’s way.”

In a statement, HIAS said, “There are no words to express how devastated we are by the events in Pittsburgh this morning. This loss is our loss, and our thoughts are with Tree of Life Congregation, our local partner Jewish Family and Community Services (JFCS) of Pittsburgh, the city of Pittsburgh and all those affected by this senseless act of violence. As we try to process this horrifying tragedy, we pray that the American Jewish community and the country can find healing.”

READ NEXT: Accused Political Mail Bomber Formerly Worked as a Male Stripper But Not as a Chippendale

Read More
5 Fast Facts, Breaking News, Shooting
Robert Bowers allegedly said "all these Jews need to die" prior to his arrest following a massacre at the Tree of Life Congregation Synagogue in Pittsburgh.